A Clear Narrative in Primary Season 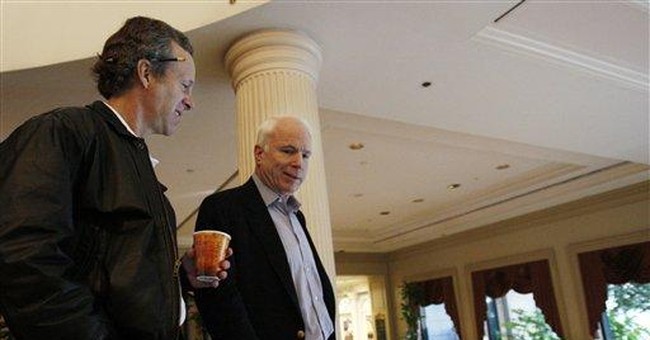 WASHINGTON -- Nevada's caucuses turned a simmering subtext of the Democratic presidential nomination contest into a dominant narrative. South Carolina winnowed out a Republican candidate, whether Mike Huckabee knows it or not, and the candidate who counted on being winnowed in there, Fred Thompson, wasn't.

Speaking in the sunshine after her Nevada victory, Hillary Clinton said there were many people to thank but mentioned only one: Antonio Villaraigosa, Los Angeles' Hispanic mayor. Her 64 percent of Nevada's Hispanic vote produced her victory. Although the culinary workers union had endorsed Barack Obama, many of its workers are Hispanic and went their own way.

The 22 Democratic primaries and caucuses of Feb. 5 occur in many states with huge Hispanic populations (e.g., California, New York, New Jersey, Obama's Illinois), so for Obama's campaign, the suddenly pressing question is: Will America's largest minority, Hispanics, support a candidate from the second-largest minority, African-Americans?

Also, Obama seems flummoxed by the Clintons' Clintonness. When he committed the gaffe (defined as the utterance of a truth in conditions inhospitable to that fugitive virtue) of saying that for many years the Republicans were "the party of ideas," he was merely repeating something said decades ago by an exemplary Democrat, the senator whose seat Clinton fills -- well, occupies: Pat Moynihan.

Clinton promptly resorted to the sort of bilge that the adjective "Clintonian" was created to denote. She said she did not think privatizing Social Security was "a better idea." As a fellow so usefully said in Charles Dickens' "The Pickwick Papers," "That 'ere song's political; and, wot's much the same, that it ain't true." Obama had of course said nothing about conservative ideas being "better."

One of the Obama campaign's senior leaders, who must have dozed through the 1990s, has expressed astonishment at the Clintons' intellectual sociopathy, as when they audaciously charge that Obama is a tepid defender of abortion rights. Their evidence is that on an abortion-related vote in the Illinois Legislature, he voted "present." The Clintons certainly know, and just as certainly do not care, that Obama's vote was tactical, cast for procedural reasons at the behest of abortion-rights leaders in Illinois.

A populist to whom the people are indifferent is a melancholy spectacle, and John Edwards won just 4 percent in Nevada, where his courtship of unions was supposed to elevate him to the top of the class struggle's barricades. He has competed in three states (Iowa, New Hampshire and Nevada) and lost them by increasing margins. Someone should tell him the joke that another populist, William Jennings Bryan, told on himself after losing three presidential elections (1896, 1900 and 1908) as the Democrats' nominee:

A man tried three times to enter a saloon and three times was tossed out. After the third time he dusted himself off and said, "I'm beginning to think those fellows don't want me in there."

Edwards, who probably will finish a distant third in South Carolina this Saturday, where he won in 2004, soon will run the risk of having the dreaded S-word affixed to him: Harold Stassen's persistence in seeking the presidency rendered him ridiculous. Edwards might consider supporting Obama, who Edwards has identified as a candidate of "change," against Clinton, who Edwards says is a candidate of "the status quo." Edwards' departure from the contest could, however, serve Clinton by freeing up some white male voters who might then support her.

Thompson has left the race and now can continue to support John McCain. In New Hampshire, Thompson attacked McCain's principal problem there, Mitt Romney. In South Carolina, Thompson's attack on Huckabee as a "liberal" might have provided McCain's margin of victory.

Huckabee is a niche candidate who has run out of niches. Perhaps more than any other two states, Iowa and South Carolina were suited to him because of their large numbers of evangelical Christians. But in each he finished fourth among nonevangelical participants in the Republican nominating process. Having no message that resonates broadly, and little money with which to broadcast it, he is in a political cul-de-sac.

So far, Romney has won the most Republican votes and delegates, but Rudy Giuliani could bolt to the front in both categories on Feb. 5. Most of those contests are open only to Republicans, and based on January's evidence, that is good for Romney and ominous for McCain. At the moment, however, it remains possible, perhaps even probable, that each party will offer its oldest and most familiar candidate, Clinton and McCain, to a nation clamoring for a rupture with the recent past.