Why are Turkish Troops in Northern Iraq? 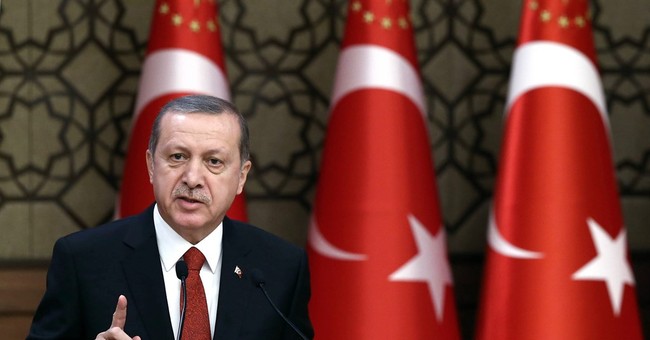 It has not received much attention in the American mainstream media, but Reuters, Aljazeera, and others have reported that Turkey deployed 150 troops near the ISIS-occupied city of Mosul in the northern part of Iraq about a week ago without invitation, creating an international crisis. The Iraqi government lodged a protest with the UN Security Council and demanded a complete and immediate withdrawal of Turkish troops. Several thousand Iraqis, mostly Shiites, protested in Baghdad and Basra holding up banners reading “Death to Turkey” and “Death to Erdogan.” Even the White House issued a statement calling for a withdrawal. According to Ahmed Saad of Reuters, the Turkish government insists that its troops are part of an “international mission to train and equip Iraqi forces to fight Islamic State,” something the Iraqi government denies.

When a country sends its troops into another country without an invitation, the words used to describe such an act usually include “attack,” “incursion,” or “invasion.” For Turkish President Erdogan to violate the sovereignty of Iraq, especially with tensions rising between Ankara and Moscow, and with rumors that Turkey is helping to fund the Islamic State by buying its oil, he risks inflaming an already volatile situation. Why would he do that?

An article by Dexter Filkens in The New Yorker a few days earlier suggested that the Turkish troops may be there at the invitation of the Iraqi Kurdish leader Massoud Barzani, which would be ironic, since the Turks were bombing Kurds in Syria as recently as October. A BBC report in October said that Turkey confirmed shelling Kurdish fighters in Northern Syria who were allied with the US in fighting ISIS. In fact, there were reports of the Turks strafing Kurdish PKK fighters in Iraq, while Barzani was in Ankara for talks with Erdogan, and he didn’t seem to be bothered by it. Barzani, the de facto President of the Kurds in northern Iraq, may be biding his time for international recognition of a Kurdish state or he may be motivated by self-promotion, thinking that the Turkish government gives him prestige and leverage against the Iraqi Prime Minister Haidar Al Abadi. It is possible that he invited the Turks into Northern Iraq.

Another explanation posited by Filkens is that the Turks need to feel relevant in the Middle East again. Erdogan gambled away his influence by putting all his support behind the anti-Assad forces in Syria, including ISIS. Filkens wrote, “As much as any other leader in the region, Erdogan has pushed vigorously for the removal of Syrian President Bashar al-Assad. To see this through, the Turkish government has backed the most extreme rebel groups, including ISIS, allowing and even helping foreign fighters to come into Turkey and cross into Syria.” Now, with Russia and some Western nations starting to pound ISIS, and with Syria’s Assad unlikely to ever trust Erdogan again, Erdogan may be looking for new friends and new ways to look important.

Whatever the reason for Turkey’s incursion, it is adding risk to a volatile situation in Iraq and Syria which includes the Russians and may include US ground forces in the near future.

It should also raise some red flags for American politicians. Not too long ago, some well-known figures were suggesting that the US government should support Turkey, which is a NATO member, against Russia. That followed an incident whereby Turkish forces shot down a Russian fighter jet a mile-deep in Syrian territory after it apparently crossed over Turkish airspace for a few seconds. Most notably, Republican Presidential candidate Senator Lindsey Graham said, “Turkey punched Russia in the nose” and “good for Turkey.” Another Republican Presidential candidate, John Kasich, used similar language in the televised CNN debate last Tuesday, saying “It’s time we punched the Russians in the nose.” Can anyone imagine the reaction, if Putin had sent 150 Russian troops to Northern Iraq without an invitation from the Iraqi government?

To date no American politician says that he wants to punch Turkey in the nose. Apparently, supporting ISIS is not as bad as supporting Assad, and bombing the Kurds doesn’t get anyone too excited either. The US media likewise is silent about the Turkish troops in Northern Iraq. For these reasons, Erdogan can do whatever he wants. It is almost as though he knows how we think.