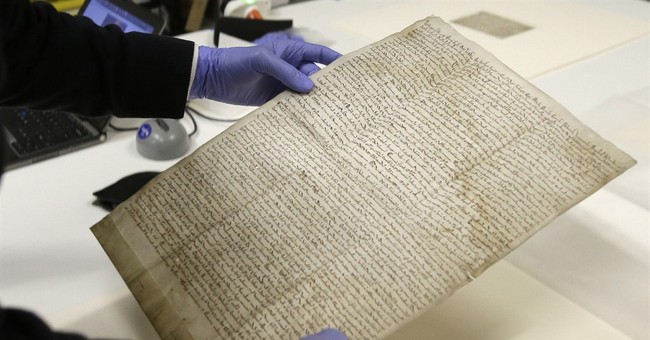 Almost 800 years ago to the day, on 15 June 1215, some English barons and clergymen met on a field known as Runnymede and watched the king of England put the royal seal on a document known today as Magna Carta—a document limiting the power of the king and granting rights to ordinary citizens. It was one of those rare times in history, when brave men stood up to a tyrant and changed the world for the better.

In the early 13th century, a reckless and ruthless king named John ruled England, Ireland, Normandy, Aquitaine, and Anjou. Eighteenth century historian David Hume describes John as, “Equally odious and contemptible, both in public and private life, he affronted the barons by his insolence, dishonored their families by his gallantries, enraged them by his tyranny, and gave discontent to all ranks of men by his endless exactions and impositions.”

John knew that the barons disliked him, so he demanded that they place close relatives—a son, nephew, or brother—in his custody to hold as security. He also kept a few expert swordsmen close at hand at all times, in case one of the barons felt bold enough to challenge him to a duel.

An unsuccessful war against the French King Philip II in the years 1202-4, caused the loss of the continental provinces of Normandy, Aquitaine, and Anjou. Yet, unashamed and undeterred, for the next few years, John continued to act arrogantly and recklessly, culminating in a decision in 1209 to challenge the Pope’s authority in the matter of choosing the Archbishop of Canterbury. The Pope, Innocent III, quickly excommunicated him, creating a serious problem for a king who claimed to reign by the grace of God. Church bells could no longer be rung in England, clergy could no longer say mass for the general public, and men of the cloth had to resign their posts rather than serve an excommunicated king. Anyone who worked with John in any capacity was likewise excommunicated. The Pope held all the cards, so John had to concede to all of the papal demands, which included—to the shame of the English barons—granting authority over England and Ireland and promising to pay the Pope fealty and a large sum of money annually. Satisfied that John had repented, in 1213 Innocent III cancelled the excommunication and allowed him to rejoin the church.

One would think after losing such big battles that John would steer clear of conflict, but it was not the case. Confident he was secure on the throne and that the Pope would support him, John decided to launch another war against the French to regain the lost provinces. Naturally, he expected English barons to support him. The barons, however, refused to join his adventure, convinced that John was incapable of winning a war against Philip II. Simultaneously, the new Archbishop of Canterbury, Stephen Langton, assembled the English noblemen and showed them the Charter of Henry I, which enumerated the rights of ordinary Englishmen. Langton persuaded the noblemen that these rights desperately needed to be reaffirmed. David Hume wrote, “The barons, inflamed by (the Archbishop’s) eloquence, incited by the sense of their own wrongs, and encouraged by the appearance of their power and numbers, solemnly took an oath, before the high altar, to adhere to each other, to insist on their demands, and to make endless war on the king till he should submit to grant them.”

After Christmas, the barons as a group appeared before John and issued their demands. Hume wrote, “The king (was) alarmed with their zeal and unanimity.” He asked for some time to consider the matter and agreed to meet with them again after Easter. John, however, spent the next few months planning treachery. He felt he could weaken the barons’ resolve, if he could take away the support of the church. He granted the clergy a charter giving them the right to choose their own replacements for vacant posts, and he promised to lead a crusade in Palestine against the Moors. The local clergy and the Archbishop of Canterbury, however, despite the charter John granted them, were firmly behind the barons.

Two thousand knights plus retainers assembled in a village near Oxford to challenge the king. John asked them what their demands were, and, according to Hume, after they were delivered, he flew into a rage and promised he would never grant such liberties as would reduce himself to slavery. The knights, then, proceeded to attack the king’s castles. They had some success and marched into London, where they were received without opposition. Next they laid waste to the king’s park and palaces, and John, who was holed up in a castle in Hampshire with only seven knights to defend him, had to face reality—he might be killed. He quickly sent a message to the barons agreeing to their demands. A truce was called, and a meeting was held on the field of Runnymede. There, the king signed and sealed the document which reaffirmed the church’s right to elect its own clergy, and granted rights and privileges to the barons and ordinary people.

Some of these rights and privileges would later be brought to the New World and find their way into our Bill of Rights in slightly different language. Notable among these is section 39 which reads, “No freemen shall be taken or imprisoned, (etc.) except by the lawful judgment of his peers or by the law of the land.”

John, however, had no intention of keeping the promises he agreed to in the Magna Carta. He pretended to go along with them for a while, biding his time until he could annul them. Fortunately for us, he contracted a serious illness the next year and died. He was followed on the throne by his nine-year-old son, Henry III. The English barons made sure that Henry and subsequent monarchs acknowledged the limitations on their power as expressed in Magna Carta, forcing Henry to put his seal on an updated version in 1217 and then again in 1225.

In this post-Constitutional age we live in today, in which the power of the “monarch” expands at the expense of the rights of ordinary men on a daily basis, it is good to look back on important milestones on the road to freedom. Maybe the 800th anniversary of Magna Carta will remind us of how difficult it was to obtain our rights.