The West vs Putin 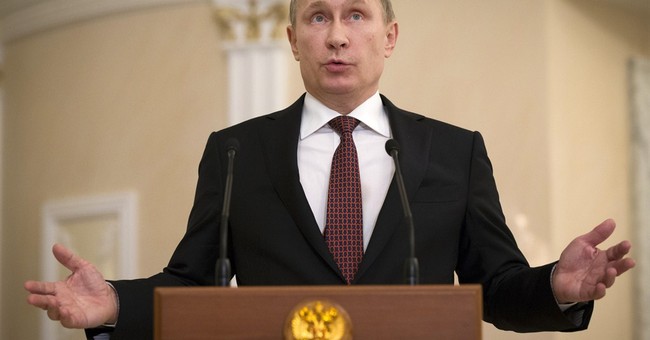 “Putin vs the West.” That was the cover story a week ago of the left-leaning British news magazine The Economist. But is that what is really happening—is Putin against the West? Or would it be more accurate to say, “The West vs Putin”?

The Economist is part of the mainstream media, and the media in the West have been waging a verbal war against the Russian President the past few years, ever since Putin regained the reins of power from Dmitry Medvedev in 2012. Just look at the left-wing blog which calls itself “Yahoo! News,” which regularly attacks Putin, when it is not attacking Sarah Palin, Ted Cruz, or Fox News.

It wasn’t so long ago, though, when the left-wing looked somewhat favorably upon Vladimir Putin. During the first two terms of his presidency, from 2000 to 2008, the New York Times was more likely to write something positive about the Russian leader than about American President George W. Bush.

Something changed in the subsequent years, but it wasn’t the Western press. What changed was Vladimir Vladimirovich Putin himself. Sometime over the past decade or so, Putin became serious about his Christian beliefs. Unlike the current American President, he has been known to invoke God in his speeches and, also unlike the American President, he makes a point of going to church on Christmas Day. The Russian government has been spending more than $100 million to rebuild churches, monasteries, synagogues, and even mosques, destroyed or neglected during the era of Soviet repression. Monasteries and churches taken over by the former Communist regime have, in many cases, been given back to the Orthodox Church. Most telling, perhaps, is a speech Putin gave in December 2013, in which he said:

Many EuroAtlantic countries have moved away from their roots, including Christian values. Policies are being pursued that place on the same level a multi-child family and a same-sex partnership, a faith in God and a belief in Satan. This is the path to degradation.

Regarding that speech, Pat Buchanan asked the pertinent question, “Heard any Western leader, say, Barack Obama, talk like that lately?”

Praising Christianity would not be enough by itself to bring the full ire of the left-wing press down upon him, but denying “gay rights” would. In 2013 Putin signed a bill passed unanimously by the Duma which would make it a crime to promote the gay, lesbian, and transgender lifestyles among minors. The punishment for “gay propaganda” is a fine up to $3000, but in the case of foreigners, it could lead to a jail term up to fifteen days. In another bill he signed, insulting people’s religious beliefs became a crime, punishable by imprisonment up to three years. In America, only one religion may not be insulted, and it isn’t Christianity. But the Russian bill was a response to the desecration of a church by some noisy girls who fashion themselves as a punk rock group called “Pussy Riot.” (Contrary to nonsense repeated in the Western news media, these atonal girls were not convicted for slandering Putin.) Both bills were widely supported by the Russian people.

“But what about Ukraine?” you ask. “Isn’t Putin trying to put the old Soviet Union back together?” It is worth noting that Putin did not start the Ukraine crisis, nor is his position unreasonable. The current conflict started when Ukrainians overthrew their legitimately-elected President, Viktor Yanukovych, because he wanted closer ties to Russia than to the European Union. Some of the people involved in the putsch were nationalists who allegedly resurrected the symbols of the regime allied with Hitler and the Nazis in World War II. Whether that is true or not, ethnic Russians in Crimea and Eastern Ukraine were scared enough to want to secede. They held a plebiscite and an overwhelming majority voted for secession. Putin’s main input was to support it after it had taken place, something any leader would be expected to do for his people.

Claims that he wants to put the Soviet Union back together come from Ukrainian politicians, Western politicians, Western journalists, and American pundits, but not from Putin himself. It is a form of mind-reading; they know what he wants to do, more than he does. Just consider, if putting the Soviet Union back together was his goal, why didn’t he pick an easier target to start with, something like Kazakhstan? It has a huge Russian population, it’s flat as a pancake, and its military is tiny. Wouldn’t that be easier to take than Ukraine?

Of course, if Putin were trying to revive the old Communist regime, the Western news media would love him. Remember the 1980s, when our journalists, including those in West Germany, slobbered over Mikhail Gorbachev and spit all over Ronald Reagan in the figurative sense? They would be slobbering all over Putin today, if he showed the slightest Communist inclinations, but he doesn’t. So why do the media—left and right—say the same things? Unfortunately, American journalists don’t know the difference between Ukraine and They-kraine, so our media boys and girls defer to their brethren in Europe for expertise. There, the Germans are taking the lead on the conflict, and for cultural and historical reasons, they are running anti-Putin, anti-Russian propaganda 24/7 disguised as news. No leftist journalist actually believes that Putin is trying to put the USSR back together; they only say that to dupe people on the right, whose kneejerk reaction is to hate the former KGB spy.

Still, shouldn’t we do something about Ukraine? According to the German news outlet Tagesschau, the US government will start to train Ukrainian military forces in March. That’s not enough for Senator John McCain, though, who says he’s “ashamed of my country” for not supplying arms to the Ukrainians. (This is the same John McCain who wanted to supply arms to the Syrian opposition, part of which is now called ISIS.) If the US trains Ukrainian soldiers and supplies them with arms to kill Russians, isn’t that a hostile act? Wouldn’t that be comparable to the Russians training the Mexican drug cartels and supplying them with weapons? Wouldn’t the US, not Russia, be the aggressor in Ukraine?

Putin has shown remarkable restraint while ethnic Russians are being killed across the border. Unfortunately, more Russians and Ukrainians are going to die, because even those who are not seduced by media propaganda refuse to consider secession for ethnic Russians. The image of Neville Chamberlain giving Hitler Czechoslovakia is so deeply ingrained in the Western mind that it prevents level-headed discussion of issues like self-determination, secession, and redrawing maps. Therefore, pretending that Putin is Hitler is easier to do than to have a calm, deliberative conversation.