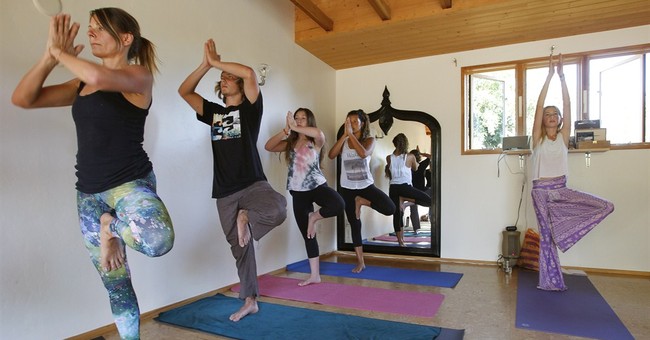 "Perplexed" best describes many DC residents' reaction a new feature of the city's tax policy, derisively called the Yoga Tax. As a part of a larger revision to DC's existing tax structure, the DC Council adopted a 5.75% tax on exercise facilities.

"Huh, do I really have to pay a tax to be healthy and fit?" tweeted one perplexed DC resident.

"Yoga and fitness should never be taxed," tweeted a DC health advocate.

DC long has been a bastion of the warped and ineffective ideology that tax policy should be used to make people more virtuous and to change residents' behavior.

The DC bag tax arose from a DC Council desire to influence shoppers from buying plastic grocery bags which could end up in the fabulously filthy Anacostia River.
Other jurisdictions, like California, have picked up the "tax policy as moral police" banner and pushed through their own plastic bag tax.
Tax policy should be value-neutral. This is America -- founded as the home of the free and land of the brave after colonists protested an unfair British tax. Americans won the right to change their relationship with their government and we should stay true to our principles of limited government and maximum liberty at every available opportunity.

Not content to rely on neighbors educating neighbors, DC politicians used the force of law to interfere, yet again, in the close, almost familial, relationship between the customer and business owner.

While a 5 cent bag tax may not be a big inconvenience or financial hardship for the well-heeled Council Members of DC, it is a death by a thousand cuts for poorer residents. It is one more law that throws sand in the engine of commerce and liberty.

Like many other social taxes and programs, the original justification propels a new tax to passage, but over time, those reasons are forgotten or lost and taxpayers can no longer hold their representatives accountable.

So here we have another example -- a tax on exercise facilities despite 56.4% of DC residents being overweight. DC and federal taxpayer dollars already go towards programs aimed at reducing the prevalence of overweight and obese residents, not to mention the federally funded medical costs of weight-related disease care.

The rationale for the yoga tax is to create a "more equitable and sustainable tax system," these two words being required terms for any controlling, liberty-limiting government proposal.

There is an irony here: DC would like more revenue to put towards pet projects aimed at changing resident's behavior. To that end, DC is eager to tax fitness centers that help people develop healthy habits. See the circuitry of this reasoning?

A twenty-nine cent increase on a $5 fee for pick-up basketball is not likely to prevent most people from going to a gym. Likewise a 5.75% tax on exercise facilities is not effectively going to combat obesity and will have the unfortunate effect of sending a conflicting message against health choices.

The yoga tax should go in the trash can of failed tax policy. Just remember to keep it out of the recycle bin since we do not want it to be used elsewhere.