Republicans Must Defend the Right to Party

Gavin Wax
|
Posted: Dec 09, 2020 1:24 PM
Share   Tweet
The opinions expressed by columnists are their own and do not necessarily represent the views of Townhall.com. 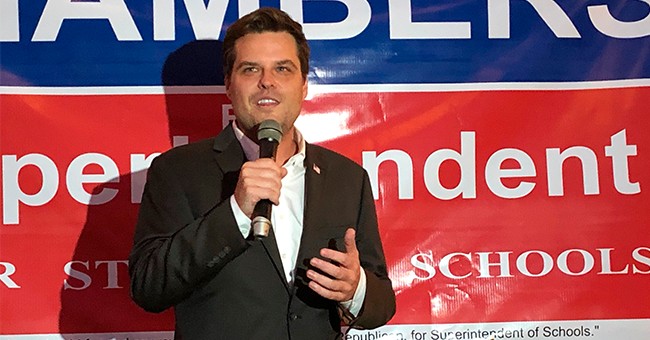 Last week, the New York Young Republicans held our 108th Annual Gala with Rep. Matt Gaetz (R-FL) and journalist James O'Keefe in what may have been the most controversial event in our history.

We had to fight through a labyrinth of busybodies, from power-crazed bureaucrats to fake news hacks to weak-willed conservatives to surly left-wing agitators and everything in between, just to have our event and celebrate freedom in the United States of America. We had to shuffle our venue, and we found new keynote speakers on the fly. It became a challenge to us. Regardless of the circumstances, we were going to have our party. Not just because we wanted to have some drinks and let off some steam, but because the American spirit cannot be deterred by the sorriest and most pathetic among us.

The fallout after the event was predictable. The same interests that tried to preempt us are now throwing a collective tantrum. New Jersey Governor Phil Murphy has even threatened legal action as a result. The New York Young Republican Club is considering a civil rights lawsuit against the Democrat state governments of New Jersey and New York for their threats, harassment, and dishonesty in subverting the First Amendment of the Constitution to punish their political opposition. Their campaign of hate has enabled ANTIFA domestic terrorists to target me in my neighborhood with defamatory fliers that put my safety at risk.

I want to make it abundantly clear that this is about far more than a handful of debonair, sharply dressed right-wingers wanting to party. Our basic freedoms, enshrined in the first 10 Amendments of the Constitution by our forefathers, are being treated as mere privileges, which can be dangled over our heads due to the whims of government henchmen following orders from court scientists on Big Pharma's payroll. This is unacceptable and provides an opportunity for conservatives to take advantage. As Democrat Governors such as Cuomo and Murphy wreak havoc on the social lives of our nation’s youth, the Republican Party must reach beyond the base and build a broad coalition to resist lockdown authoritarianism.

Rule through arbitrary diktat is quickly replacing the rule of law. Being able to party - the pursuit of happiness, as our founding fathers defined it - is about expressing ourselves as we see fit. The COVID-19 pandemic is not happening in a vacuum. We are learning that these temporary emergency measures are going to become the “new normal.” With many more ghastly Orwellian overreaches already in sight, such as vaccine implant tracking, privacy-eviscerating contact tracing mandates and wellness checkpoints during travel stops, this very well may be our last chance to fight back, and Republicans are putting forth measures to stop this cultural backslide while broadening the GOP tent to Millennials and Generation Z.

Florida Governor Ron DeSantis has pushed back with a “bill of rights” for college students in his state. His proposal includes banning localities from closing down restaurants and bars while preventing universities from punishing students for attending parties. The lockdown restrictions on young people are particularly egregious and nonsensical, playing into existing intergenerational tensions. Baby Boomers are seemingly thrilled to jettison the civil liberties of their children and grandchildren for the false promise of safety from bureaucrats. The isolation is also causing the youth to succumb to despair and commit suicide, so this initiative will literally save lives.

Personally, I would go one step further than Governor DeSantis and encourage all young Americans to join me in actively exercising our ‘right to party.’ We hope our event has a galvanizing effect on the broader community. We know there is a massive grassroots groundswell growing behind us, with many more in the shadows who have been forced into silence due to social pressure. We are calling on New Yorkers and Americans nationwide to end their silence. We need a campaign of massive civil disobedience, across every sector of society, to make sure that COVID-19 mass hysteria does not destroy our Republic. We must be fearless in the face of daunting opposition.

The successful New York Young Republican Club event last week was a strike against the bow of the rising scientific dictatorship that is being imposed on us. We fought back for the American way of life in a manner that our valiant ancestors would have certainly approved. We refused to surrender our core freedoms to mass hysteria. We would not acquiesce to rules that make no sense due to threats and anger. We enjoyed ourselves as our leftist enemies seethed, with our defiant display being a stark reminder of the inner cowardice that defines them. This is the type of jovial rebellion that is needed across the country to win over the youth and preserve our nation’s freedom.