Gavin Wax
|
Posted: Apr 27, 2020 12:01 AM
Share   Tweet
The opinions expressed by columnists are their own and do not necessarily represent the views of Townhall.com. 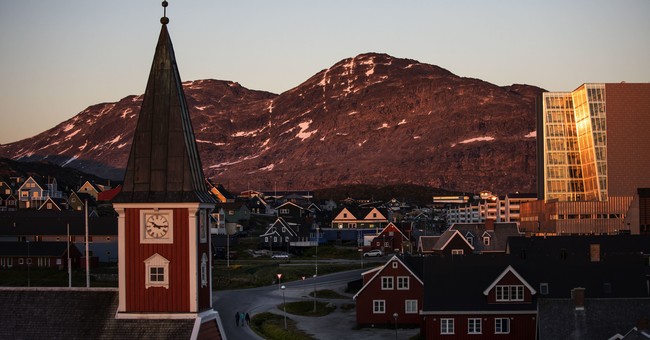 President Trump’s recent move to invest $12 million in Greenland’s economy is a great first step to securing America’s strategic interest in the mineral-rich island. To follow through, the United States must redirect its resources away from unstrategic, endless wars.

In his 2019 State of the Union address, Trump delivered that unforgettable line: “Great nations do not fight endless wars.”

What do great nations do? They bring out the best in others, not altruistically, but in pursuit of their own strategic interests. That is precisely the direction Trump is currently headed with Greenland, authorizing a $12 million investment in the world’s largest island to develop a “sustainable” economy, ABC News reported.

Just eight months ago all the usual haters and losers mocked Trump when his vision of a Greenland purchase for the U.S. was leaked in the press.

No one is laughing now that Trump is impressing Greenland’s prime minister, Kim Kielsen, who said the $12 million gift “confirms that our work on building a constructive relationship with the United States is fruitful.”

The strategic importance of Greenland, a territory of the Kingdom of Denmark, has been well understood for over 100 years. The U.S .even offered $100 million for the land in 1946. A recent trend of its ice sheet melting offers the makings of lucrative mining. It holds the second largest deposit of rare-earth metals and oxides, vital for the production of solar power, wind turbines, and electric cars. There is also its deposit of uranium, the sixth-largest in the world.

Rare-earth minerals are necessary components of more than 200 products across a wide range of applications, especially high-tech consumer products, such as cell phones, computer hard drives, electric and hybrid vehicles, and flat-screen monitors and televisions. In addition to significant defense applications such as guidance systems, lasers, radar, and sonar systems.

However, if Trump doesn’t take the necessary steps to move the ball forward, his detractors and enemies will be vindicated in their snickering. Beyond that, America would be worse off, because Greenland does indeed offer the utmost critical location and resources for military and economic security.

Just ask Russia and China, which are making their own strides there for the same reasons. Might Greenland be the biggest foreign policy arena for the Trump presidency?

The general challenge of Trump’s foreign policy has been to resist getting bogged down in more wars, as his predecessors did so carelessly, while still exerting American predominance around the world. He rightfully rejects the neoconservative and Clintonian (neoliberal) thrusts of expansionism through regime change wars, but Trump isn’t blinded by anti-interventionist ideology.

The kind of American expansionism that Trump could revive is perfectly encapsulated in his seeking of Greenland. It doesn’t require a cultural revolution or regime change, just the economic and military power of the U.S. to open and secure access for more freedom in that stagnant Arctic land.

Greenland is 836,300 square miles. Its acquisition would be a historic event unlike anything witnessed since our country’s third president Thomas Jefferson completed the Louisiana Purchase. That $15 million sale for 827,000 square miles eventually amounted to 15 new states, but immediately symbolized America’s unstoppable momentum, its Manifest Destiny as it’s called.

The deal would lift up the roughly 56,000 residents of Greenland. Liberated from a socialist state like Denmark and incorporated into the US federal system, their local control would increase while they enjoyed new trade and security benefits as well.

Trump also keenly sees the potential of a deal to help out Denmark, a U.S. ally and NATO member. The nation is “losing almost $700 million a year” managing Greenland, Trump said in August 2019.

However, any further attempt at making America great again and putting America first, especially regarding Greenland, will end up a tragic waste of time unless Trump puts a stop to never-ending military missions like the ones in Afghanistan, Iraq, and Syria.

As Trump is well aware, over $6.5 trillion has been spent on the war on terror so far. The president must imagine from time to time how much else could’ve been accomplished with the taxpayers’ money.

In addition to the more well-known war theaters, the U.S. has CIA or military boots on the ground in Chad, Libya, Mali, Niger, Nigeria, Somalia, and Tunisia. At the very least, strategic gains are marginal given the cost in blood and treasure being bogged down in these hellholes.

What makes much more sense is opening a U.S. consulate in Greenland, exactly what Trump is doing this summer. The U.S. hasn’t had such a diplomatic presence there since 1953, although it has maintained its northernmost military base in northeast Greenland for the last 77 years.

A fatal mistake would be if Trump assumed that he, or any president, could juggle an international race to Greenland’s resources and endless wars at the same time.

Fortunately for Trump, he’s got the American people on his side against the presumptive Democratic presidential nominee Joe Biden when it comes to foreign policy. Barely a quarter of Americans said military interventions make America safer in a poll conducted by the Chicago Council on Global Affairs in September 2019.

That same poll, however, shows an increase in support of the U.S. taking an active role in global affairs. It sure does look like when Obama was in charge, Americans felt less confident in their global standing, as compared with Trump in office.

In a more recent poll conducted by Concerned Veterans for America, 73 percent of veterans said they would support removing all U.S. troops from Afghanistan. Seventy-one percent of vets said the same thing about Iraq. Relatives of veterans closely mirrored those same polling patterns.

Trump shouldn’t take that vote for granted though. While the president certainly has enthusiastic support, it is different from what energized his primary victories in 2016.

The fact is his foreign policy has not been a huge success thus far. The Afghanistan war lingers on, despite attempted peace talks with the Taliban, and there are U.S. troops in Syria, the bulk of whom are North and South Carolina national guardsmen, guarding oil fields for some unclear reason.

Trump should accelerate on his 2016 foreign policy campaign promises and boost optimism by outlining a project like purchasing Greenland that defines a positive, substantial shift in U.S. foreign policy.

That will require executive decisions that invite all the vitriol thrown Trump’s way in 2016. But we all know how that ended.