From Norway with Leave: What the U.S. Can Learn From Smart Leave Policies for Fathers

Garrett Fahy
|
Posted: May 26, 2019 9:25 AM
Share   Tweet
The opinions expressed by columnists are their own and do not necessarily represent the views of Townhall.com. 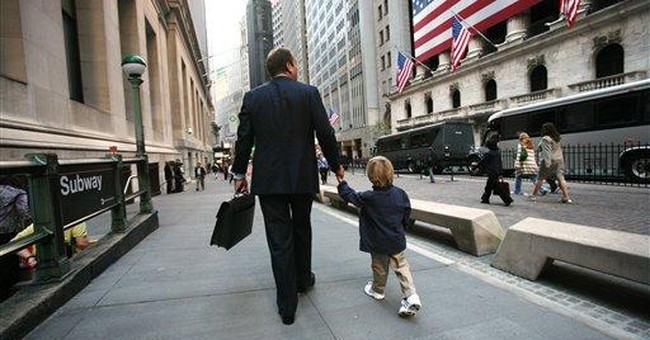 They’re everywhere, they’re handling everything, and they’re loving it.

Pushing the strollers.  Carrying the kids on their shoulders.  Taking the daughters to brunch.  Shepherding a gaggle of excited little ones down a parade route on an unseasonably hot May 17th Norwegian Constitution Day.

We’re talking about Oslo’s fathers. They’re on daddy daycare and fashionably making it look easy. But two obvious questions occur: where are the mothers? And, what is Norway doing to convince and prepare its fathers to run the kid show?

On the first question, the mothers are around, or maybe out for some me time, but they’re not hovering. And on the second question, Oslo’s fathers are mastering the father gig because in Norway, they’ve had the time, state-sponsored time, to figure it out.

Talk to a local and two things become clear: parenting (but not necessarily marriage) is a paramount value in Norway, and present fathers are a national priority.  How does Norway encourage fatherhood?

Here, a combination of national laws, employer benefits and a less obsessive work culture means most fathers get around four months of fully paid/protected paternity leave, which they can (and do) take, usually after the mother finishes her year-long maternity leave.  Or, depending on their job situation, (like if they happen to be unemployed from just moving back to town) they can take a lump sum payment to offset child-rearing costs and still enjoy time with their little ones.

As a result, fathering isn’t a financial sacrifice, like for many in the U.S., biological dads are more present and more adroit at their duties.  And the results speak for themselves: fathers publicly take the initiative and don’t leave the parenting to mothers, in-laws, nannies or father substitutes.

This is a welcome scene in a western world that is trending away from procreation and involved fathers.  Harrowing demographic statistics (negative population growth, decreased marriage rates, and criminal conviction statistics) in Europe and the United States bear witness to the disturbing patterns of reduced childbearing and the societal impact of absent fathers.  But Norway has figured out another model, at least when it comes to present fathers. It is hard to roam the streets here without wondering: is this replicable in the United States?

Some in D.C. are working on parental leave legislation, including First Daughter Ivanka Trump, Republican senators Mike Lee, Joni Ernst and Marco Rubio, and Democratic senator Kirsten Gillibrand.  But there’s no bipartisan agreement on a path forward, and the policies that get closest to the fatherhood issue usually involve hot-button fights in other legislative contexts: family separation in immigration; sentencing reform and recidivism issues; and abortion laws involving the (minimal) rights of fathers.

Given the lack of federal laws on paid family leave and our frenetic work ethic, the United States’ fatherhood picture won’t mirror Norway’s overnight.  But some changes are in order.  Here are a few humble suggestions.

First, congress should explore incentives (reduced tax rates, greater flexibility in health and benefit plans) in the federal tax code that reward employers for giving employees (both mothers and fathers) greater parental leave benefits.  Some larger employers offer generous leave benefits, and some states have proposed new or more generous legislation on this, but federal action on paid parental leave - one of the few areas of bipartisan agreement and overwhelming public support - would accelerate the trend for all employers.

To be clear, this isn’t to say congress should require employers to provide paid leave in the way the Affordable Care Act required individuals to purchase health insurance. But congress can and should explore voluntary, market-based options that incentivize private businesses to promote greater fatherly involvement in a child’s early years.

Second, public and private employers can and should explore options that allow employees with newborns and infants to work less, work remotely, and/or work more flexible schedules.  Solutions such as increased contract maternity and paternity leave coverage, job share and flex time are readily available in Norway and Commonwealth nations (Canada, New Zealand, Australia) and wouldn’t be too hard to implement in the U.S.

And given advances in technology and increasingly longer commutes, it’s irrational and unreasonable to expect parents of newborns to work a schedule that pretends they don’t have new demands on their time, and significantly less sleep every night.

A closing word on the political implications of an increased focus on fatherhood. Promoting fatherhood will never be the leading political issue (the economy and healthcare rule), it’s not a wedge issue with a catchy slogan (“build the wall”) and the intended beneficiaries (children) can’t vote.

But in a political environment increasingly dominated by suburban women voters, parties or candidates who promote fatherhood (and therefore healthier families) will rightly come across as rational.  And worthy of a vote, or at least a second look.  Given the razor thin vote margins in some swing states in 2016, and the likely thin margins in 2020, a focus on fathers could make all the difference.

Garrett Fahy is a business/election law attorney and talk radio host in Southern California.  Sara J. Fahy, his wife, is a management consultant who works with corporates, governments and nonprofits on strategy, economic development and brands. They are currently galavanting across Europe, investigating social structures, wine varietals, and local confections.