Gabriella Hoffman
|
Posted: Jan 26, 2022 12:01 AM
Share   Tweet
The opinions expressed by columnists are their own and do not necessarily represent the views of Townhall.com. 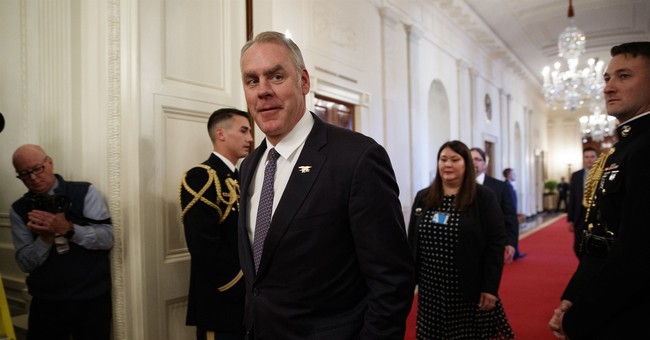 Ryan Zinke, formerly Montana’s At-Large representative and the 52nd Interior Secretary, wants to represent the Treasure State in Congress again with the creation of a second congressional seat.

Zinke is running to represent the newly-formed MT-1 District, which encompasses “15 counties in western Montana and part of Pondera County, including the cities of Missoula, Kalispell, Butte, Bozeman and Hamilton.” Right now, he’s favored to win the “Likely Republican” district.

“Out West, conservation is a big, big deal,” said the 52nd Interior Secretary. “We’re at SHOT Show, where the Second Amendment reigns supreme and the Second Amendment is not about hunting. It's about the ability of an individual to defend himself, his family, and his lifestyle.”

“In order to be a steward of our public lands and our legacy, it takes management,” he added. “You can't just let it go. And it should be unacceptable that you have forest fires that are chewing up hundreds of thousands of acres putting lives at risk. And in some cases, loss of life and destroying habitat. It’s destroying watersheds.”

“The John Muir model of ‘leave it alone to wilderness’ works in some areas, but it can't be the model for all of our public lands because what we're witnessing is a lack of management.”

“Public land belongs to the public, and access is important,” he stressed. “What we're seeing is a continuation of shutting roads down, limiting public access.”

The former Interior Secretary believes public land stewards including hunters, anglers, and ranchers are “under assault and attack in many cases.”

Zinke expounded on this, declaring, “The best conservationists are those that use the land and understand the importance of it.”

I asked about the fully-recovered Greater Yellowstone Ecosystem (GYE) grizzly bear, which he delisted, and why the Biden administration refuses to follow the science after restoring threatened protections on it.

The conservationist noted, “We should celebrate the success of the Endangered Species Act. It did recover a species [the GYE grizzly bear] that was under duress.”

Zinke relied on guidance from Obama’s Fish and Wildlife Service (FWS) Director, Dan Ashe, who determined the bear recovered and should be accordingly delisted.

“Let's move assets over to some of the species that are under duress, as there are a lot of species that we do need to look at. Focus on assets, but those [species] that have recovered, celebrate the success,” he continued.

I asked Zinke to comment on Patagonia’s viral ad that proclaimed ‘The President Stole Your Land’ in wake of his department’s 2017 review of controversial National Monuments— including Bears Ears and Grand Staircase-Escalante in Utah.

Objects to be protected under such designations must be on federal land, “not private or state land.” He explained Section II of the law, which awards the president power to designate the “smallest area compatible with protection of the object”—a principle former President Obama violated after designating Bears Ears on December 28th, 2016. Zinke believes this declaration “put hunting, fishing, [and] traditional use at risk.”

Much to the chagrin of Patagonia, his report only recommended a reduction—not elimination—of several controversial monuments.

“Shame on Patagonia,” Zinke continued. “If they really cared about the environment, perhaps they wouldn't manufacture in China, where, you know, 90% of the world's plastics comes from four rivers in China and they pay child wages.”

“There wasn't one square inch in the review that left public ownership; it was just how you use it,” affirmed the avid sportsman.

A Montanan’s Take on the Popular Yellowstone TV Series

I was compelled to ask Zinke, a fifth-generation Montanan, about the hit Paramount Network series Yellowstone (which TV Guide aptly dubbed “conservative prestige TV”) and if it accurately depicts his state. Until Season 4, the show was largely filmed in Utah—not Montana.

“I think the vistas are great,” he responded. “It's fiction. But what makes it compelling is it's so well-acted. I think the production and the quality of acting is superb, so it draws you into a story.”

“Is it like Montana? You know, it has a reflection of it. It's not exactly like Montana oftentimes. Montanans would not put up with dynamiting a watershed and diverting the river. You'd be thrown in jail on that one, as an example. But I think the series is great entertainment. The vistas, again—the outdoors—are splendid.

To learn more about Zinke’s campaign in Montana’s new congressional district, visit his website and watch the full interview here.