Gabriella Hoffman
|
Posted: Nov 20, 2020 12:01 AM
Share   Tweet
The opinions expressed by columnists are their own and do not necessarily represent the views of Townhall.com. 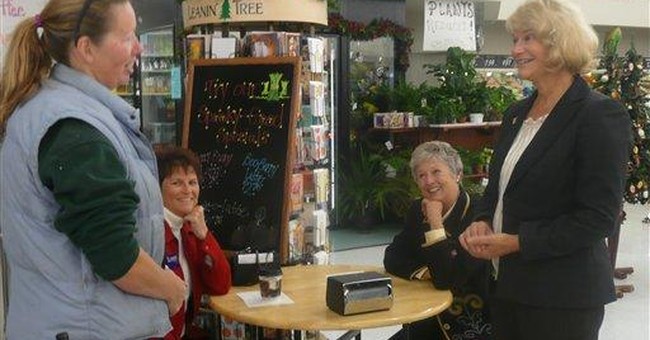 As of this writing, 30 Republican women—new and returning members—will serve in the House of Representatives.

From 2009 to 2017, Lummis was Wyoming's At-Large Representative and served on several House Committees (including Natural Resources and Appropriations).

Regarding her return to D.C., the fourth-generation rancher remarked, “I'm really looking forward to being in the Senate because they take the long-term view. And a lot of the issues that I am interested in, require that long term.”

Tackling the Debt and Bitcoin Are Top Priorities

“I'm interested in the debt and the deficit,” she proclaimed. “We have to figure out how we're going to pay it back, when we're gonna pay it back. None of that's ever been discussed, to my knowledge. It's just managing the accumulation of debt rather than even thinking about paying it back.”

“I own Bitcoin,” she said. “I want other people to understand the benefits of Bitcoin and how they can be part of a diversified asset allocation.”

It’s not unusual to see Wyoming elect women—especially the Republican variety. In 1869, it became the first state to grant women the right to vote. Hence, the “Equality State” nickname.

“It is a great honor to get to ping that glass ceiling and to be the first woman from Wyoming elected to the U.S. Senate. And to do it in a year when so many Republican women have been successful,” Lummis said.

The political outsider is optimistic these fresh-faced House Republicans, over time, can matriculate to the Senate as she did.

“I want to—early on in 2021—get together with them and have discussions about how and why they were so successful.”

Lummus won’t know her Senate Committee assignments until January but is certain she’ll serve on the Energy and Natural Resources Committee or the Environment and Public Works Committee. At a minimum, she’ll join the Senate Western Caucus currently chaired by Senator Steve Daines (R-MT).

Why? She told me conservation issues like forest management are “near and dear” to her heart.

“When we see forests ignored when we see catastrophic wildfires pass through forests that have already been damaged by bark beetles...the federal land is in the poorest condition,” she noted. “Right next door you'll see a steep forest that because conservation thinning of that forest occurred, it has a healthier understory. It has healthier trees that are better able to withstand both disease and fire.”

With respect to the Green New Deal, Lummis said it would devastate her state’s economy and upend balanced use practices.

As for President Trump’s conservation legacy, she believes his Interior Department has done yeoman’s work rebuilding trust with stakeholders out West. She also heaped praises at Donald Trump Jr., an avid sportsman, for helping to shape his father’s agenda.

“The Trump administration...did help with access to hunting,” Lummis noted.

“And a lot of that really had to do with the emphasis that Donald Trump Jr., put on hunting and conservation. And then the President— who's not a hunter but who respects his children's hunting prowess—and their knowledge of conservation. A lot of those ideas really did filter through to the Department of the Interior. I can't say enough good things about David Bernhardt. I think he's been a terrific administrator and steward...”

With her new position, don’t expect Cynthia Lummis to sit on the sidelines. She’s ready to get to work for her constituents.

“Our very way of life as Americans— the freedoms we enjoy— are being threatened now,” she stressed. “And I think we need to fight back in education, in churches, on the Main Streets, the public square.”