The Housing Market Has Roared Back. . . Right? 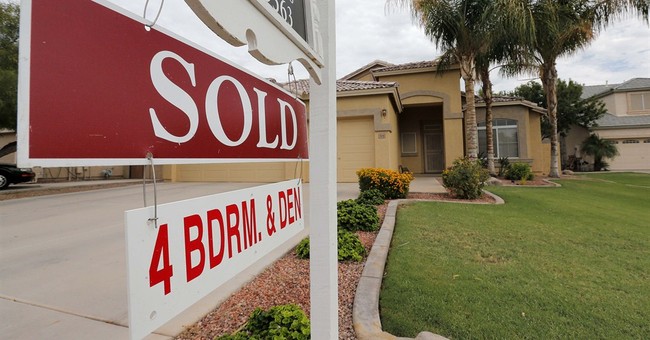 During a recent airing of my radio program a liberal caller informed me that the housing market had roared back. This was in response to my stating that Barack Obama trying to blame the poor economy on the shutdown was like Al Capone blaming the St. Valentines’s Day Massacre on Valentine’s Day.

A sixteen day shutdown did not cause the current economic conditions. Obamacare, Dodd-Frank, Keynesian folly, taxes, EPA regulations, debt, deficit, and the Federal Reserve’s money mischief are to blame.

Why would this lady believe that the housing market has roared back? It’s simple really, a criminal lack of journalism, and an all out propaganda campaign by a liberal media heavily invested in Obama. Proving Orwell correct; the people will believe what the media tells them they believe.

Take for example the relentless reporting of the Obama fear mongering; if the debt ceiling isn’t raised America will default for the first time in history. When the truth is the only way America could possibly default would be if the president chose not to make the payment. Moody’s made it clear there is no relationship between a default and the debt ceiling.

The same is true for reporting on housing. The local newspaper and media outlets constantly reported a recovery that this lady believed. The truth is there has been a recovery since hitting bottom in 2011, however home sales in her market remain 15% below pre-recession levels, new construction permits the lowest since 1980, and in a state that ranks 50th in home construction. Yet she believes housing has roared back.

The same is probably occurring in local markets all across the nation. Real estate is local so your dosage may vary.

Any chance for a housing recovery remains about jobs. Even on jobs the media has the liberal hoodwinked. How is it the liberal can defy facts? While reporting that 77% of jobs created this year have been part time due to the rules in the ACA, the liberal claims it’s just a coincidence.

Maybe we shouldn’t blame these people for embracing false reporting or beliefs. After all, here’s what President Obama told them the day following the end of the shutdown:

“And now that the government is reopened, and this threat to our economy is removed, all of us need to stop focusing on the lobbyists, and the bloggers, and the talking heads on radio, and the professional activists who profit from conflict, and focus on what the majority of Americans sent us here to do.”

Who can blame Obama for wanting to discredit those telling the truth and directing people to his enablers in the media? Now that the shutdown has ended, stories regarding the catastrophe of Obamacare will unfold daily for months to come, if not years.

Here is how the implementation of Obamacare will most directly impact the housing market.

Everyone who has paid for insurance will be hit with increased premiums for new policies that are ACA compliant.

This means a major hit to disposable incomes for families already suffering from a lack of jobs, reduced working hours, reduced incomes,rising costs, and higher taxes.

What could possibly result from this government coerced purchase of insurance lowering everyone’s disposable incomes? Consumer spending will take a hit.

Just what the economy needs today, selling less goods and services. That should help the job market.

The economy can’t recover until housing recovers, and neither will recover unless the job market recovers.

The good news is we’ve been told the housing market has roared back. Whew, no more worries.

Fritz Pfister hosts Your Daily Dose of Reality weekdays at 9am central at Wmay.com or AM 970 in central Illinois.