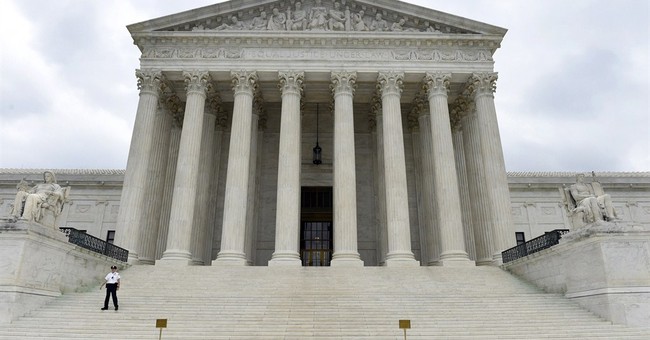 The Supreme Court is about to decide if the 14th Amendment to the United States Constitution requires the states to redefine marriage to include same sex relationships. There are several reasons why the answer is no.

Some may say, “Who cares what they believed in 1868 about homosexuality? We’ve evolved since then.”

That’s addressed by the second reason: laws and words have specific scopes and meanings. They don’t have unlimited flexibility as liberal justices tend to think. Neither the intent nor the text of the Constitution requires the states to redefine marriage. If the people of the United States have “evolved” on the issue, then the Constitution provides them with a very clear and fair way for the document to intelligently “evolve”—they need to convince a supermajority of federal and state legislatures to amend the Constitution. That’s the very reason our Constitution has an amendment process!

If we fail to use the amendment process and permit judges to substitute their own definitions and judgments for what the people actually meant when they passed the law in the first place, then we no longer govern ourselves. Why vote or use the political process if unelected justices strike down our laws and impose their own as they go? In fact, why have a Constitution at all? If it’s “evolving” or “living,” then it’s not really a collective agreement of the people—it’s a pretext that allows judges to invent rights and impose any moral (or immoral) position they want against the will of the people.

Imagine if the people were to pass an amendment guaranteeing a right to same-sex marriage. Would you consider the Supreme Court to be legitimate if it imposed its own position and overturned the amendment? No, the people decide what the laws are, not the Court.

Third, the 14th Amendment was intended to prevent states from discriminating against newly freed slaves. At that time blacks and women didn’t even have the right to vote, yet no court ever thought it could use the “equal protection” clause to change state voting laws. So why do some district courts think they can use it now to change state marriage laws? Are we to believe that “equal protection” does not guarantee a woman’s right to vote but does guarantee a woman’s right to marry another woman?

Since the people “evolved” on voting rights, they convinced supermajorities in Congress and of the state legislatures voted to add the 15th and 19th Amendments in 1870 and 1920 respectively. The courts knew they shouldn’t act as legislatures to grant rights not addressed by the Constitution. Neither should this Supreme Court.

Fourth, despite all the talk about equal rights, everyone already has equal marriage rights. Every person has the same equal right to marry someone of the opposite sex. That law treats all people equally, but not every behavior they may desire equally. If people with homosexual desires do not have equal rights, then people with desires to marry their relatives or more than one person don’t have equal rights. The “born that way” justification doesn’t work either because that same justification could make any desired arrangement “marriage,” which means the logic behind it is absurd. The Court needs to acknowledge the fact that natural marriage, same sex-marriage, incestuous marriage, and polygamous marriage are all different behaviors with different outcomes, so the law rightfully treats those behaviors differently while giving every citizen the equal right to participate in marriage whatever its legal definition is.

Finally, the states make marriage law, not the feds. The U.S. Constitution says nothing about marriage. While the Supreme Court did overturn Virginia’s ban on inter-racial marriage, it did so because Virginia discriminated on the basis of race, which is precisely what the 14th Amendment was intended to prevent. There is no rational reason to discriminate on the basis of race because race is irrelevant to marriage. However, gender is essential to it. Even the 2013 Windsor decision, which partially struck down the federal Defense of Marriage Act, recognized that marriage is a state, not a federal issue. Since there is no 14th Amendment issue here, the Court must leave marriage to the states.

Legal reasons such as these are all the Court is constitutionally permitted to consider. Polls and policy considerations are for the people or their legislatures, not the courts. Ryan T. Anderson writes in his recent column titled Memo to Supreme Court: Nothing in the Constitution Requires States to Redefine Marriage: “The overarching question before the Supreme Court is not whether an exclusively male–female marriage policy is the best, but only whether it is allowed by the U.S. Constitution. The question is not whether government-recognized same-sex marriage is good or bad policy, but only whether it is required by the U.S. Constitution.”