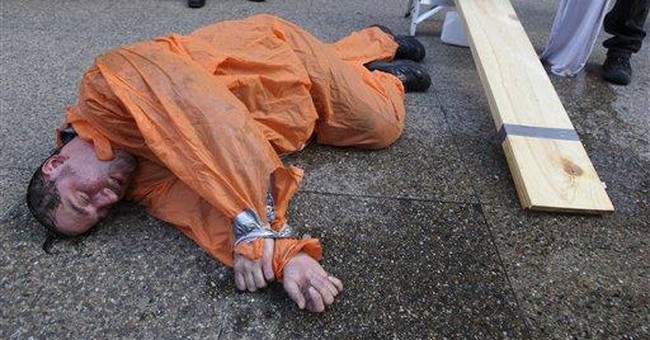 Is waterboarding torture?  If it is, we’ve been torturing our service members for years.  As a United States Naval Aviator, I attended SERE school in the California desert in 1985.  SERE (which stands for Survival Evasion Resistance and Escape) prepares combatants for the possibility that they might be taken prisoners of war.

While many aspects of the training remain classified, I can say that we received treatment far more challenging and uncomfortable than anything the terrorists ever experienced at Gitmo or Abu Grab.  As has been reported elsewhere, waterboarding was common at SERE school as it was in my class.  It was done to help us resist giving up sensitive information in the event we were interrogated by the enemy.  SERE is probably the most impactful training I’ve ever experienced.

Now, despite decades of its use on American service members, President Obama declares that waterboarding is torture when used on terrorists.  Is it?  Reasonable people cannot disagree whether scalding a person’s skin, dismembering him, or beheading him constitutes torture.  Those are undeniably torturous acts that our enemies have inflicted on Americans.  But since waterboarding leaves no permanent physical damage, reasonable people can disagree over whether or not it’s actually torture and should be used on terrorists.  I’ll address that question in a future column.

What I’d like to address in this column is the shocking inconsistency of the President’s position.  Despite being against waterboarding, President Obama does not seem to think that scalding, dismembering, or beheading is torture in all circumstances.  In some circumstances, the President actually approves of such treatment, so much so that he is now exporting it to other countries with our tax dollars.  He’s even thinking of forcing certain Americans to inflict it on the innocent.

In fact, the President along with most in his party and some in the Republican Party, think that such brutality is a Constitutional right, which they cleverly disguise with the word “choice.”  Choice in these circumstances actually means scalding, dismembering, or de-braining a living human being—which is literally what saline, D&C, and partial birth abortions respectively accomplish.  (Before anyone labels me an “extremist” for making this point, realize that I’m just factually describing what these procedures literally do.  In my opinion, the “extremists” are those who deny these verifiable truths.)

The President might say that the comparison doesn’t work because we’re not sure about the humanity of the unborn.  He said as much in the Rick Warren debate when he declared that the question of life’s beginning was “above his pay grade.”  Well, if there’s any doubt about when life begins, shouldn’t you err on the side of caution and protect what may be a human being?  If you’re not sure whether the rustling in the bushes is a deer or your daughter, won’t you get a certain ID before shooting?

Actually, there is no doubt about the humanity of the unborn.  We are sure that an unborn child is a human being, and we know this not by religion, but by hard scientific data.  The President knows this.  If embryonic life is not human, then why does he insist on using taxpayer dollars to harvest embryonic cells?  Answer:  because they are human.  Moreover, human bodies and body parts are extracted from the womb by abortion, not just “tissue.” Finally, it’s a scientific fact that at the moment of conception a new genetically unique human being exists.  You haven’t received any new genetic information since the moment you were conceived.  Only four things separated you from adulthood—time, air, water and food.  Those are the same four things that separate a two-year old from adulthood.  We don’t allow the killing of two-year old humans; why should we allow the killing of humans just a little bit younger who happen to be in a womb—especially those at full term?

But the legality of abortion is not the main point here.  That’s bad enough, but the President is advocating something even worse.  He isn’t just allowing abortion to continue, he seeks to promote and subsidize it through the Freedom of Choice Act (FOCA).  That deceptively-named bill will end the choice of certain doctors to conscientiously refuse to do abortions, and it will end the choices millions of Americans have made to restrict abortion through parental notification laws, informed consent laws, and even bans on partial birth abortion.  All of those restrictions freely chosen by the people of this country will be invalidated by FOCA.  The President also wants to force taxpayers to pay for abortions right here in America.

Why does he want to do this?  Doesn’t he know what goes on in an abortion?  I have to assume yes.  He’s a very intelligent man.  That leaves us with one of two possibilities, neither of which is good. Either he really believes that scalding, dismembering, and de-braining ought to subsidized and increased, or he is willing to champion these things to please his base for his own political gain.  The former is madness.  The latter is an example of “the ends justifying the means,” which leads us back to waterboarding.

Questions for the President:

Why do you think that waterboarding the guilty is immoral, but subsidizing the killing of the innocent is the right thing to do?

I’m not intending to be uncharitable, and I hope I am mistaken.  But it appears to me that this President is willing to subsidize the killing of the innocent to potentially save himself, but is unwilling to simulate drowning on the guilty to potentially save thousands or millions of Americans—a simulation that we have performed on our own servicemen for decades.