The Stimulus Bill: A Nation of Nadya Sulemans? 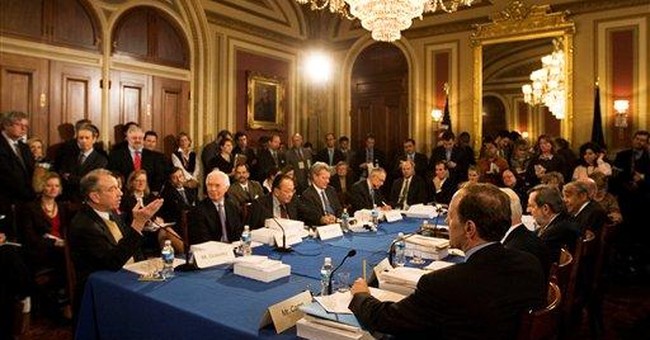 Nadya Suleman, the mother of the octuplets, is being resoundingly criticized all over the country for basically having children she can’t afford. I know of no one who says they support her decision, for obvious reasons: unmarried, unemployed, bankrupt, living on welfare and homeless. She and her six kids are living with her parents in a little three-bedroom home, three of the kids have “special needs” that require money from the state, and they’re poor enough to qualify for food stamps.

She says she simply wanted more children because she grew up as an only child and she didn’t want her six children growing up without sufficient siblings. So, she gathers the money she had saved from her disability claim against the state from a few years ago and finds a fertility doctor willing to implant the rest of the embryos she created with her long-time boyfriend that gave her the previous six children. She says she implanted the six remaining embryos, two of them split into twins, and she gave birth to the longest-surviving octuplets in American history on January 26.

You know the story.

But, here’s the question: Who are we to criticize her when—at least in some respects—we’ve been doing the same thing for so long?

We, too, are having children we can’t afford. We’re getting benefits from the government that we didn’t pay for. We make decisions every day to do things we know we won’t be able to afford, all the while assuming that someone else will pay for it.

In many respects, we’ve become a nation of Nadya Sulemans. Who are we to tell her, “No! You can’t do that”?

Think of all the Americans who aren’t paying their own way, their “fair share”—who can’t afford the children they now have, who still choose to have more, and who rely upon someone else to feed, clothe, house, educate and provide medical care for them.

We’re an incredibly compassionate, generous and caring people—especially for those who, through no fault of their own, are thrust into unfortunate situations where they need our collective help. Widows, orphans, the disabled, those with illnesses and injuries that make it nearly impossible for them to care for themselves.

But something is wrong, very wrong, when we’re growing so many citizens who don’t even try to pay their own way, who willfully choose to take limited resources away from deserving others, and who live in such a way that they just assume it’s someone else’s responsibility to take care of them.

What ever happened to “If you don’t work, you don’t eat?” And, “Thou shalt not steal?”

Nadya Suleman is a woman who could not qualify as a foster parent, let alone an adoptive parent, and she was allowed to bring eight more children into the world, for a total of fourteen she cannot possibly care for properly. In my opinion, this is theft and child endangerment.

My heart breaks for the future of her fourteen children.

And my heart breaks for the future of America. Over half of all wage earners pay no federal income tax yet they, too, are assuming someone else is going to pay their way. In this respect, they’re like Nadya Suleman.

As Alexander Tytler allegedly wrote in 1787:

A democracy is always temporary in nature; it simply cannot exist as a permanent form of government. A democracy will continue to exist up until the time that voters discover that they can vote themselves generous gifts from the public treasury. From that moment on, the majority always votes for the candidates who promise the most benefits from the public treasury, with the result that every democracy will finally collapse due to loose fiscal policy, which is always followed by a dictatorship…The average age of the world's greatest civilizations from the beginning of history, has been about 200 years. During those 200 years, those nations always progressed through the following sequence: from bondage to spiritual faith; from spiritual faith to great courage; from courage to liberty; from liberty to abundance; from abundance to complacency; from complacency to apathy; from apathy to dependence; and then from dependence back into bondage.

As a nation we look like we’re well down that path to dependence. Clearly, we are a looking to big government to meet more and more of our needs. Let’s pray we change course before we kill the goose that lays golden eggs.