The Enemy is Us 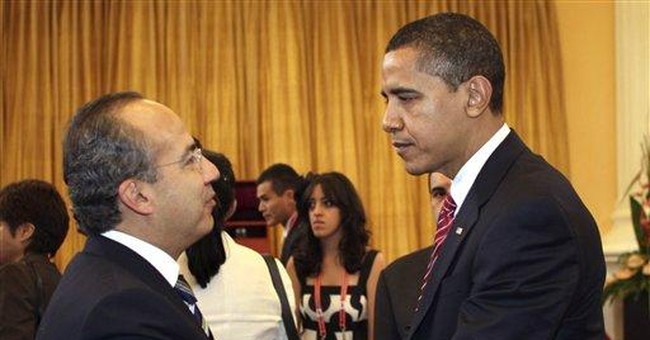 Perhaps the most famous line the history of cartoons was one Walt Kelly gave his much-beloved character, Pogo: “We have met the enemy and he is us.” Increasingly, it appears Barack Obama feels the same way about America. Call it the PogObama worldview.

The President’s first hundred days have been a blur of legislative initiatives, policy pronouncements and symbolic gestures that, taken together, constitute the most sweeping and fundamental make-over of U.S domestic and foreign policies since at least World War II. Animating them all is a hostility towards this country’s traditional values, institutions and conduct that is best described by Jeane Kirkpatrick’s phrase “Blame America First.”

To be sure, Mr. Obama has plenty of company in this camp, both at home and abroad. “San Francisco Democrats” (another Kirkpatrickism) like Nancy Pelosi and tyrants like Hugo Chavez (with whom the President did “high fives” over the weekend) and Saudi King Abdullah (to whom the President bowed two weeks ago) are of a mind: The United States owes the world myriad apologies for its arrogance, unilateralism, aggression and other sins. And it needs to make amends in various, substantial and ominously portentous ways, including the following:

Releasing the so-called “torture memos”: The President pandered to the Left last week by ignoring the advice of five past and present CIA Directors and declassifying several Top Secret legal memoranda. They lay out in excruciating detail what “enhanced interrogation techniques” could be used in extreme circumstances to secure information being withheld by al Qaeda and other high value enemy operatives.

While Mr. Obama says that those who followed these guidelines will not be prosecuted, he has, as a practical matter, invited their prosecution by others. Certainly, he left the door open, both here and overseas, to inquisitions of the memo-drafters and their superiors by Spanish judges, witch-hunters in the U.S. Congress, prosecutors with the International Criminal Court, etc.

By effectively declaring “open season” on those in the Bush administration who helped secure this country in its time of need post-9/11, Mr. Obama is not only wronging dedicated public servants who acted in good faith and who prescribed techniques well short of torture. [(As David Rivkin and Lee Casey point out in Monday’s Wall Street Journal, thousands of American servicemen have been subjected to such methods for decades as part of their survival training).] He is also opening his own team to similar jeopardy, perhaps for killing innocent civilians with their Predator strikes in Pakistan or attacks now said to be under discussion on putative Somali “terrorist camps.”

Undermining U.S. sovereignty: Mr. Obama is embracing sovereignty-sapping treaties, theories of “universal jurisprudence” and individuals like State Department Legal Advisor-designate Harold Koh who espouse them. The desired result evidently is a world governed by international norms and bureaucrats, rather than one dominated – or even forcefully led – by bad old America.

Cutting America’s power-projection capabilities: The defense budget reductions recently unveiled by Secretary of Defense Robert Gates seem to have one thing in common: They will diminish the United States’ ability to extend its global reach for the protection of this country and its interests around the world.

For example, Messrs. Obama and Gates propose to cancel: the C-17, America’s indispensable airlifter; the F-22, the world’s best fighter/attack aircraft; and the Army’s Future Combat System, a comprehensive and long-overdue modernization program for that service’s armored forces. They would also truncate the purchase of F-18 E/Fs, the backbone of naval aviation, evidently as a precursor to reducing the number of operational aircraft carriers. Missile defense programs will be ravaged. There will be no modernization, ever, of the nation’s nuclear deterrent. And the industrial base needed to support all of the above will be allowed to atrophy and/or be sold off to foreign powers keen to manufacture the superior weapon systems we no longer will.

Trying to appease America’s adversaries: Mr. Obama’s is determined to normalize relations with literally every one of the world’s bad actors – notably, Vladimir Putin’s Russian kleptocracy, Iran’s incipient nuclear mullahocracy, the Castro brothers’ island gulag, the megalomaniacal Kim dynasty in North Korea, the spreading and virulently anti-American axis in our own hemisphere led by Venezuela’s Chavez and the Muslim Brotherhood and other Shariah-adherent entities – without regard to their continuing, dangerous behavior or ambitions.

By associating himself with these hostile powers’ critiques of the United States and by acquiescing to many, if not all, of their demands, Mr. Obama may temporarily cultivate the illusion of having improved bilateral relations and America’s “image” internationally. Unfortunately, it is absolutely predictable that – in the absence of systemic changes in these and other despotic regimes the President is romancing – any “improvements” will come at the Free World’s expense. And the image America will ultimately project is that of an emasculated, formerly great power, easy prey for those who seek not just to displace, but destroy, it.

Under these circumstances, those of us who reject the PogObama view of the United States have our work cut out for us. Fortunately, most Americans do not see their country as “the enemy.” It is time for legislators and other leaders who prize our sovereignty, who recognize the importance of preserving and wisely using our power and who understand that our true foes are numerous, elsewhere and being emboldened to enlist the public in challenging Team Obama’s agenda, before it brings us to grief.