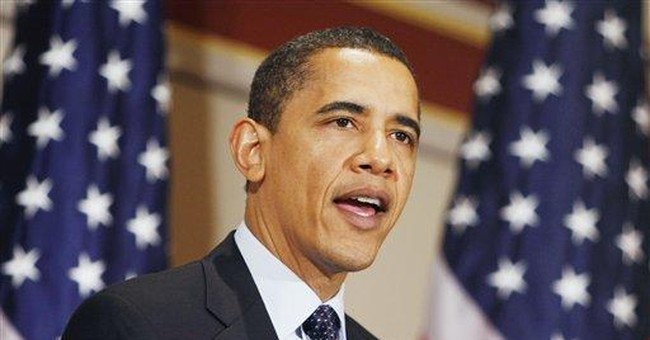 President Obama’s stewardship of the national security portfolio to date amounts to a wrecking operation, a set of policies he must understand will not only weaken the United States but embolden our foes. After all, the Communist agitator Saul Alinsky, a formative influence in Mr. Obama’s early years as a “community organizer,” made Rule Number One in his 1971 book Rules for Radicals: “Power is not only what you have but what the enemy thinks you have.”

According to this logic, the various steps Barack Obama is taking with respect to the armed forces, the foreign battlefields in which they are engaged, our allies as well as our adversaries will not only diminish our power. They will encourage our enemies to perceive us as less powerful – with ominous implications. Consider some illustrative examples:

The Obama administration is cutting the defense budget by 10%. The result will be to preclude much, if not virtually all, of the modernization that will be required to prepare the U.S. military to contend with tomorrow’s wars. Most of what the Pentagon spends goes to fixed – and growing – personnel-related costs (pay, bonuses, health care, etc.) and operations. As a result, at Obama funding levels, there will not be much available even to “reset” today’s forces by refurbishing the equipment they have been using up in present conflicts.

The President is on a path to denuclearizing the United States by refusing to modernize the arsenal or even to fund fully the steps necessary to assure the viability of the weapons we have. He hopes to dress up this act of unilateral disarmament by seeking to resume arms control negotiations with Russia, as though such throw-backs to the old Cold War and its bipolar power structure apply today – let alone that there are grounds for believing the Kremlin will adhere to new treaties any better than the previous ones it systematically violated.

For good measure, Mr. Obama is mounting a frontal assault on the armed forces themselves. The President plans to repeal the law prohibiting homosexuals from serving in the military. It is absolutely predictable that significant numbers of servicemen and women – including many of the most experienced commissioned and non-commissioned officers – will retire rather than serve in conditions of forced intimacy with individuals who may find them sexually attractive. The effect will be to break the all-volunteer force.

Then there are the Obama initiatives in Iraq and Afghanistan. The President’s adoption of a deadline for withdrawing most U.S. forces from the former and his signaling that – despite a near-term 17,000 troop “surge” – he is preparing to turn the latter over to the oxymoronic-dubbed “moderate” Taliban are conveying unmistakable messages to friends and foes alike: Under Barack Obama, it is better to be a foe of America than one of its friends.

This message is, of course, being strongly reinforced by the treatment he is doling out to nations in each category.

Friends like the Poles and Czechs have been left in the lurch as the Obama administration intimates that the United States now thinks Europe does not need after all to be defended against Iranian nuclear-armed missile threats. Not since Jimmy Carter abandoned the NATO deployment of so-called “neutron bombs” has a President conveyed such a devastating message of weakness and irresolution in the face of hostile threats to our European alliance partners.

Other allies have not fared much better. Israel is on notice that its security interests are going to be sacrificed to the Obama administration’s pursuit of a Palestinian state – even one ruled by a terrorist organization like Hamas (or, for that matter, Fatah) committed to Israel’s destruction. Britain has been told it neither deserves nor has a “special” relationship with the United States.

Meanwhile virtually every enemy of the United States is the object of assiduous cultivation and overtures for rapprochement by the Obama administration. It will reward IranSyria can expect the Golan Heights and removal from the terrorism list even as it pursues nuclear arms, renews its overtly colonial hold on Lebanon, supports the terrorists of Hezbollah and helps its abiding master, Iran, destabilize Iraq. for “going nuclear” with normalized relations.

As mentioned above, Russia gets to be treated like a superpower again while it arms Iran, inserts bombers and naval units into our hemisphere, wields its energy leverage against our friends in Europe, Ukraine and Georgia and squeezes our supply lines into Afghanisan. There are no repercussions for China as it makes a mockery of the administration’s beloved Law of the Sea Treaty by threatening an unarmed U.S. naval vessel in its Exclusive Economic Zone.

Last but hardly least, a “respectful” Obama administration seems keen to embrace those in the Muslim Brotherhood and like-minded Islamist organizations who seek to impose the toxic theo-political-legal program authoritative Islam calls Shariah on distant populations – and insinuate it into our country.

Can there be any doubt what America’s adversaries make of all this? Great grief will come our way if they conclude, as Alinsky surely would, that our power is waning, and that they can exercise theirs with impunity against our interests – and those of whatever friends we have left.