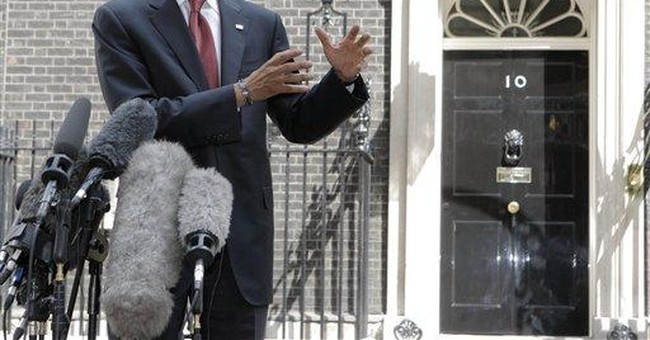 Democratic presidential candidate Barack Obama’s single most illuminating statement in the course of a just-completed overseas tour was his self-description during the stop in Berlin as a “citizen of the world.” Widely interpreted as nothing more than an innocuous expression of solidarity with his adoring, post-nationalist hosts, this declaration is actually just the latest indication that Senator Obama embraces a vision of his own country and its role in the world that should be exceedingly worrisome to America’s citizenry.

The appellation “Citizen” has a checkered past. French revolutionaries used it first to distinguish the common man from the reviled aristocracy, then to enforce their reign of terror on both. Orson Welles entitled his classic film modeled on the life of William Randolph Hearst “Citizen Kane” – depicting an unscrupulous demagogue who, despite his privileged background, nearly obtained high elective office on a populist platform.

Now Citizen Obama uses a turn of phrase with no less troubling overtones. The notion of world citizenship has become a staple of transnationalists who seek to subordinate national sovereignty and constitutional arrangements to a higher power. They are working to replace, for example, our directly elected representatives operating in a carefully constructed system of checks-and-balances, with rule by unaccountable elites in the form of international bureaucracies, judiciaries and even so-called “norms.”

Citizens of the world can have their rights circumscribed or even eliminated without their consent. For instance, in March the Organization of the Islamic Conference – what amounts to a Muslim mafia organization – demanded that the UN Human Rights Council (dominated by the OIC’s members) amend the Universal Declaration of Human Rights. The effect was to alter the foundational freedom of expression so as to prohibit speech that offends adherents to Islam.

World citizens embrace the idea that the United Nations and other multinational organizations are imbued with a moral authority not found in nation-states like ours. When he was the Democratic Party standard-bearer, Senator John Kerry famously described American foreign and defense policy as only being legitimate when it passed a “global test” – in other words, approval by the international community.

Today, the Democrats’ incipient nominee subscribes to the view that, as he put it in Berlin, “The burdens of global citizenship continue to bind us together.” Global citizenship amounts to code for subordinating American interests to our putative responsibilities as a member of the international community. The former can be pursued only to the extent our fellow global citizens – or, more precisely, their unelected, unaccountable spokesmen in Turtle Bay, Geneva, The Hague or other seats of “world government” – approve.

To further such a subordination of American power, the transnationalists have long sought to enmesh the United States in a web of treaties and institutions. These include: the World Trade Organization (which now routinely rules against U.S. companies and economic interests while giving a pass to Communist China’s); the International Criminal Court (which has just established an ominous precedent for U.S. officials by indicting the sitting – albeit opprobrious – president of Sudan); and the Law of the Sea Treaty (described by its admirers as a “constitution of the oceans,” it assigns unprecedented responsibilities for control of the oceans and even activities ashore to international organs).

Of course, the notion that there truly is such a thing as an “international community” is a conceit of the transnationalists. In practice, decisions are made by majorities usually dominated by the world’s authoritarians – Russia, China, the so-called “non-aligned” of the developing world and, increasingly, the Islamist states. The subordination of U.S. freedom of action, let alone national security, to such a world citizenry is a formula for disaster.

A riveting insight into this reality was provided a few months back when the National Rifle Association’s Wayne LaPierre addressed a meeting in New Orleans, the scene following Hurricane Katrina of the forceful disarmament of law-abiding U.S. citizens. Mr. LaPierre showed a video which included a chilling statement from a senior UN official to the effect that, while she understood Americans were reluctant to part with their firearms, they had better get used to being “citizens of the world” just like everybody else.

For many in Sen. Obama’s audiences, references to “global citizenship” must sound about as benign as his mantra about promoting “change we can believe in.” It all has a sort of Rodney King-like quality to it: “Can’t we all just get along?”

In fact, the terminology Citizen Obama uses reveals an attachment to a radical transformation of not just our foreign policy but of the nature of our country itself. The “change” he has in mind could prove fatal to our sovereignty and constitutional form of government.

Questions about the appropriate role of America in the world and how it conducts its relationships with foreign powers are, of course, essential topics in any presidential campaign. That is particularly true at a moment when the United States finds itself engaged in a global war with a totalitarian ideology, Islamofascism, that has embedded itself in many allied countries and enjoys strong support from most of our foes.

It falls most immediately to Senator John McCain to highlight Citizen Obama’s radical answers to these questions and ultimately to U.S. voters to determine whether they want a global citizen in the White House or a president of, by and for the American people.