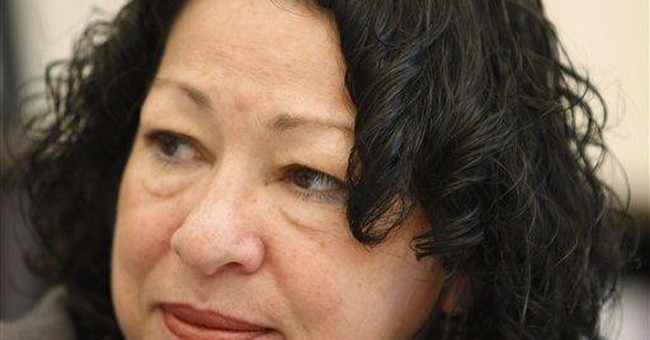 Judge Sonia Sotomayor is wrongly being sold by Team Obama as an "empathetic nominee." This adjective is shown a farce when one examines her record in two noteworthy cases involving Jeffrey Deskovic and Frank Ricci. In these instances, she acted callous and indifferent to the injustice and suffering of these men.

As a 17-year-old young man, Deskovic was convicted for the murder and rape of a classmate despite a negative DNA test. He ended up serving 16 years in prison before he was ultimately exonerated after additional DNA evidence proved another man was guilty. A good portion of his life was taken away by a justice system with Sotomayor playing judge.

Despite Deskovic serving 10 years in prison, Sotomayor refused to hear two of his valid appeals. These appeals were based on DNA evidence and coerced testimony. A county clerk gave his attorney inaccurate information and his attorney filed the appeal petition four days late. The court refused to hear this appeal, so the lawyer appealed the decision before Sotomayor's court, arguing that the error was the fault of the clerk; therefore, the case ought to be heard given Deskovic's innocence. Sotomayor ruled against hearing Deskovic's appeal, effectively sentencing an innocent man to six more years in prison for a crime he did not commit.

"Despite Sotomayor's rhetoric, her ruling in my case showed a callous disregard for the real-life implications of her rulings," Deskovic says. "She opted for procedure over fairness and finality of conviction over accuracy. Many of the victims of wrongful convictions serving long sentences had exhausted their appeals long before they were exonerated. In how many of those cases did Sotomayor vote to refuse to even consider evidence of innocence?" Even though Sotomayor displayed a callous indifference to the suffering of this innocent man, Obama wants people to ignore this case and confirm her immediately because she is a "wise Hispanic Woman."

Another case showing her lack of empathy and poor judgment is the Frank Ricci firefighter case. Frank Ricci is a Connecticut firefighter with dyslexia who studied many difficult and challenging hours, due to his disability, to pass a written test. Along with the passing of the test came a promotion but Ricci's aspirations for advancement quickly vanished as he watched the city throw his results away because no minorities passed the test and they didn't want to get sued for discrimination. Sotomayor and her court agreed with the city and were willing to punish a white firefighter who succeeds just because minority candidates did not perform well on the test.

By allowing this discrimination and racism, Sotomayor proves herself to be anything but empathetic. Fortunately the U.S. Supreme Court recently overturned Sotomayor's decision saying the city of New Haven should not have thrown out the test results because there was no proof that the test was discriminatory.

Evidently Judge Sotomayor only shows empathy when it is a member of her own race or gender: meaning, she is selectively empathetic. After all, she said, "I would hope that a wise Latina woman with the richness of her experiences would more often than not reach a better conclusion than a white male who hasn't lived that life." Apparently this means, as seen in the Deskovic and Ricci cases, a wise Latina woman will be empathetic to minorities but when white men are wronged, she turns a blind eye.

As for now, Democrats are trying to rush Sotomayor's confirmation hearing. Republicans need more time to review 300 boxes of files recently received from the Puerto Rican Legal Defense and Education Fund. This is a controversial issue because PRLDEF is connected to ACORN and worked to oppose Judge Robert Bork. Naturally, because Democrats do not want Republicans to have time to gather information and look into this connection, they are trying to rush. Sotomayor played some role in the absolutely vicious destruction of Robert Bork, and this public lynching of Bork was anything but empathetic. Americans have a right to know the full story of her involvement before she is given this lifetime appointment.

While Obama and his allies want you to believe Sotomayor is a wise, empathetic Latina, these three occurrences directly contradict the underlying argument of the Obama public relations campaign. Sotomayor is actually an advocate of old-fashioned identity politics. Justice is supposed to be blind, but in Sotomayor's case, what exists of her empathy is racially tinted. Republicans must vote against her confirmation if not given more time to look into her record. Obama shouldn't be allowed to appoint a racist to the Supreme Court.

Psaki Buries Her Knife in Biden’s Back
Townhall
Here's the academic explanation for Drag Queen Story Hour and its purpose
Twitchy
Ye and Candace Owens Sport 'White Lives Matter' T-Shirts, the Left Melts Down
Redstate
They 'Own the Science,' and They Want to Control How You Access Information About It
PJ Media