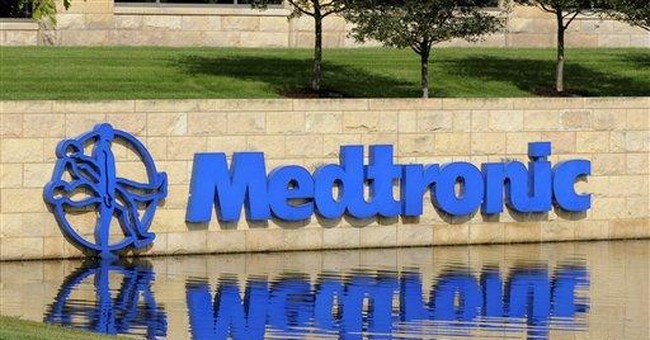 The merger of two medical companies often makes few headlines outside of the business section of the daily newspaper. The merger of medical device manufactures Medtronic and Covidien, however, is a different matter – not because of the devices they manufacture, but because of the spotlight the transaction has shined on the U.S.’s counter-productive and punitive tax code, which discourages American companies from reinvesting their global profits here at home.

America’s current corporate tax structure requires that companies pay the corporate tax rates in the countries where their profits are earned, plus the difference between the foreign rate and the U.S. rate if the company wishes to bring those profits back to the United States. For example a country with a corporate rate of 20 percent would tax a company making $1 million there exactly $200,000. However, because the current U.S. tax rate is 35 percent, repatriating those funds to the United States would require the company to pay the difference – an additional 15 percent, or $150,000 in this case. Given that massive difference, you don’t have to have a degree in corporate finance to see why many American companies often look abroad for opportunities to apply their profits rather than bringing the money home.

The upcoming merger between Medtronic and of Covidien is a crystal clear example of America’s punitive tax code discouraging U.S. investment. This deal allows Medtronic to take in $14 billion in cash held outside the U.S. and distribute it to shareholders at the Irish corporate tax rate of 12.5 percent. Moreover, the companies’ new main executive offices will be in Ireland to permanently take advantage of Ireland’s more friendly business climate. This move alone will save Medtronic $850 million per year by 2018 not to mention avoiding the medical device tax imposed by Obamacare. And Medtronic isn’t the only recent example of America’s perverse incentives in action.

Pharmaceutical giant Pfizer recently attempted to take over AstraZenca for the same reason.

Certainly in a global economy, American companies – like their foreign counterparts – can and should look for opportunities to maximize profits, innovation and efficiency world-wide. The problem is that the current U.S. tax code puts America at a disadvantage when it comes to attracting this significant chunk of foreign capital.

The top 5 U.S. holders of accumulated offshore profits General Electric, Microsoft, Pfizer, Merck and Apple, have almost $400 billion in combined accumulated overseas. Cumulatively, firms based in the United States have almost $2 trillion sitting overseas. With an anemic economy characterized by a GDP contraction of 1 percent last quarter, and a smaller proportion of Americans working than at any time since the 1970s, even a tiny portion of this $2 trillion could help jump-start America’s sputtering economy.

Congress last dealt with overseas income in 2004 with the American Jobs Creation Act. This act created a temporary one year “holiday” in which companies could bring home their abroad profits at no cost. As a result more than $300 billion was invested back in America’s economy. Unfortunately in typical congressional fashion, this was only a short term solution to what is a vexing and very long-term problem.

Congressional action to solve this problem should be twofold. Foremost the current corporate tax of 35 percent should be reduced in conjunction with eliminating sweet-heart deals and special-interest handouts to politically-connected industries that litter our tax code. This would make American corporate tax rates more competitive and attractive in comparison to the rest of the world, and eliminate the mindless provisions of our tax laws that actually discourage American companies from reinvesting their foreign profits here at home.

In order to get Americans back to work, it is essential to spur investment back into our economy, and that starts with modernizing our antiquated tax code.