Erick Erickson
|
Posted: Feb 19, 2021 12:01 AM
Share   Tweet
The opinions expressed by columnists are their own and do not necessarily represent the views of Townhall.com. 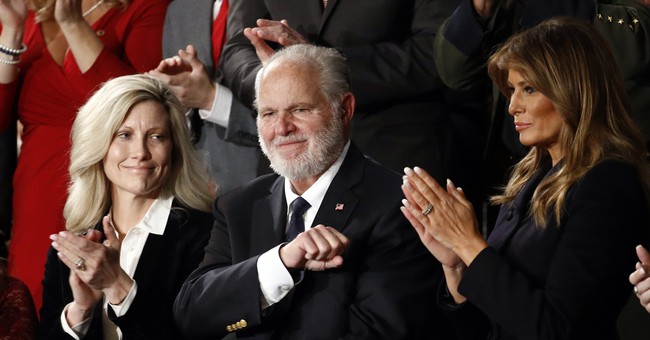 December, I was sitting on my front porch when my phone lit up with a message from Rush Limbaugh.

He and my wife have variants of the same type of lung cancer, though hers was caught very early, and her treatment has thus far contained it. Rush knew she had an older iPhone with touch-ID, and he had been chiding me to upgrade her phone. He didn't quite understand my wife's resistance to technology and insisted I was neglecting my wife by failing to give her a state-of-the-art phone.

Undeterred, he now wanted me to know he was sending her a new iPhone 12 Pro Max because he was convinced her chemo would screw up her fingerprints and make unlocking her phone difficult, which it already had been. My wife now has a better iPhone than me, thanks to Rush.

That is the sort of guy Rush was. In the midst of his own far more serious battle with cancer, he was insistent my wife have a better phone.

I was not alone in benefiting from his generosity. He was generous with advice and with iPhones, and God help you if you offered to buy lunch at a restaurant. You'd inevitably wind up aggrieving the wait staff, who knew Rush was the best tipper in the restaurant. The Erickson household has had several generations of iPhones show up thanks to Rush. At one point, Rush and I would race each other to buy the phone and email to claim victory. Then he started letting other people order for him, and it wasn't a fair fight anymore.

Back in 2010, as Herman Cain was preparing to run for president, Cox Media Group offered me Herman Cain's job. I was running the website RedState and also on CNN and served as a city councilman in middle Georgia. I was not sure I should take the job, but Rush told me he would never speak to me again if I said no.

A decade later, having filled in as a guest host for Rush along the way, I'm now doing five hours of radio -- my own syndicated show and local drive-time radio in Atlanta on one of the most listened-to talk stations in the country.

I owe much of my career to Rush.

When I was a teenager making obligatory college visits with my dad, we stumbled on Rush's program while driving through Alabama. My dad was searching for Paul Harvey. We developed a shared affection for Rush, and even when we couldn't talk about other things, we could talk about things Rush had said on air. I'd stay up late at night and watch Rush's TV show, which Fox News head Roger Ailes had produced.

The day my parents finally stopped suggesting I should probably hold onto my law license was the day I filled in for Rush the first time. Years before, Rush had referred to me on-air as "my friend Erick Erickson," and it was the first time I could remember my dad calling me to say how proud he was -- not that it was the first time, but it was the first memorable time because he just about ran off the road when he heard it and was out of breath when he called.

Rush Limbaugh pioneered a model of radio, and a lot of us would not be doing what we are doing but for Rush. He created an industry that did not exist before him. All of us in this business know none of us will ever be as good as him. Rush Limbaugh was the best and will perpetually be the gold standard by which everyone else in talk radio is measured.

There's a public caricature of Rush Limbaugh that was formed by those jealous of his success and contemptuous of his views. Then there is the real Rush Limbaugh -- a friend, a mentor and now the man who gets to personally deliver his talent back to the God of all creation from whom Rush got it and who Rush knew, loved and served.