Erick Erickson
|
Posted: Sep 15, 2017 12:01 AM
Share   Tweet
The opinions expressed by columnists are their own and do not necessarily represent the views of Townhall.com. 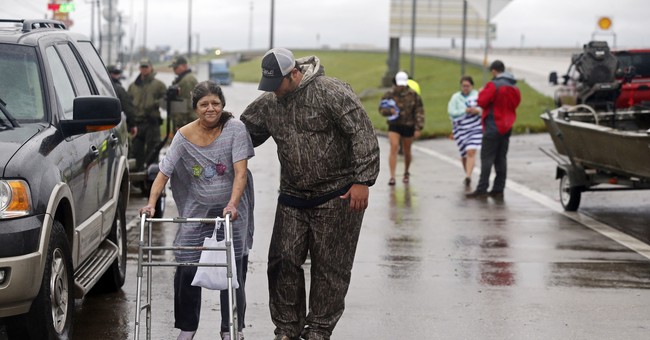 Did you hear the latest about Donald Trump? Can you believe he did that? What about Nancy Pelosi? Or better yet, what about Hillary Clinton's new book? She blames everyone but herself for her loss. Did you hear what Steve Bannon said to Charlie Rose or Mitch McConnell's response? Truth is, who cares this week?

For month after seemingly endless month, the citizens of this nation have been at each other's throats. Then it all came to a halt as Harvey and Irma came to visit. Hollywood liberals rushed to score cheap political points; the Washington Post ran pieces decrying Texas getting federal assistance while having the audacity to keep its state taxes low. Liberals decried the police in Florida stopping looters because now, even private property rights are part of white supremacy. The political groups that believe boys can become girls attacked conservatives for being "anti-science." And the left laughed at Rush Limbaugh complying with a mandatory evacuation after consuming a lot of online oxygen distorting and misrepresenting everything he said about the hurricanes.

But the regular people of the United States, not yet poisoned by politics, set it all aside. Gay, straight, black, white -- it did not matter. Neighbor helped neighbor. Stranger helped stranger. People drove from out of state into the storms to help others in need. The Cajun Navy drove their boats to Texas and saved countless lives. The Salvation Army was out rebuilding lives in Florida before the Federal Emergency Management Agency showed up.

As for FEMA, it has a long-standing policy of helping everyone and every organization rebuild if they lose their homes and buildings in disaster. But FEMA will not help churches and is being sued by several churches in Texas. Nonetheless, those and other churches and Christian relief groups are still helping FEMA and local and state agencies rebuild lives. Despite all the secular hate directed at Christian organizations these days, the Christian groups have been the first ones in and the last ones out.

Samaritan's Purse, the Southern Baptists' North American Mission Board, the Seventh Day Adventists' ADRA, Catholic Charities, the Salvation Army and more have sent volunteers and money. They are serving up warm meals, hammering nails, paying other people's bills and praying. They understand a home is not permanent, but a soul is -- both their own and those of the people they are trying to help. Meanwhile, Fortune 500 corporations and others keep touting the American Red Cross, but local officials in both Texas and Florida are piling on criticisms. It seems the Red Cross is excellent at running advertisements that pull on heart strings, but not very good at doing its core functions.

Americans seem to love to squabble about politics, and more and more Americans really are treating politics as blood sport. The white supremacists are marching in the street, and Antifa protesters are attacking police officers and anyone they suspect of being a white supremacist, even if the person is black, Hispanic or Asian. Despite the loud voices of hate, most Americans are engaged in the soft voices of prayer and compassion. They are helping each other.

Few of the tender acts of American helping American will find their way onto the cover of a magazine or the front page of a newspaper or the lead story in the nightly news, but they happen nonetheless. The smiles on the faces of the survivors and victims reward the volunteer who is not seeking fame or fortune. These volunteers just want to help. The politics of the day, the yelling, the angst and the aggravation can all be put on hold.

Sixteen years ago, Americans of all walks of life came together to mourn after the World Trade Center fell. The whole country united around a president that more than half the voters had actually rejected. Sixteen years later, with another president who lost the popular vote, we may not be rallying around a man, but Americans have not lost the capacity to rally to and for each other. United we stand.