The Clock, the Pope and Totalitarian Apologists 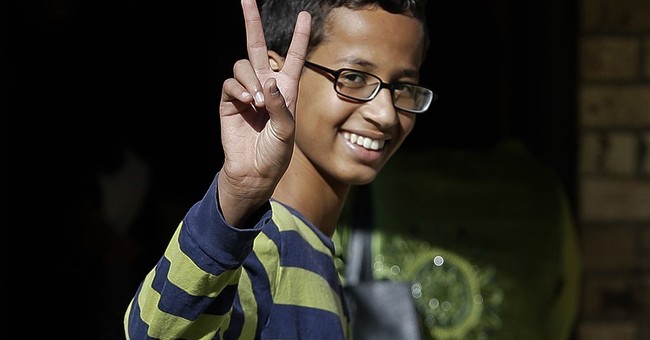 Trending
In Irving, Texas, a few days after the anniversary of September 11, a 14-year-old boy named Ahmed Mohamed took a clock to school that he had assembled inside a pencil case. He claimed he wanted to show it to his science teacher.

Afterward, the clock started beeping in another class, and Ahmed got in trouble. We know he was arrested for disrupting school. We know he was not very cooperative. But beyond that, we do not know much more than the public relations spin his family and the Council on American Islamic Relations have put out.

We do not know anything else because Ahmed's family has refused to allow the police in Irving or the local school district to release their side of the story. We know that Ahmed has been photographed with CAIR representatives. We know his father is an Islamic activist. We know his sister once got in trouble for disrupting school. As reported by The Daily Beast, Ahmed's sister, Eyman, said she "got suspended from school for three days from this same stupid district, from this girl saying I wanted to blow up the school, something I had nothing to do with."

On HBO's "Real Time with Bill Maher," Dallas Mavericks owner Mark Cuban said he called Ahmed to talk to him. Curiously, he could her Ahmed's sister giving Ahmed answers. President Obama tweeted that he stood with Ahmed. The mayor of Irving noted in an interview that Obama was tweeting support for Ahmed before a lot of the facts were even known.

The left championed Ahmed as a victim of Islamophobia a few days after September 11. Never mind that multiple people have convincingly shown that they could identically make Ahmed's clock by taking apart a 1986 Micronta digital alarm clock and reassembling it in a Vaultz locking pencil box purchased on Amazon. The media and Obama have ignored so many facts and have ignored that the family is refusing to allow the school and police to tell their side of the story -- something they can do because Ahmed is a juvenile.

When it is easy for the left, they will take the moral high ground. Another example of this came from Washington last week. Obama greeted Pope Francis at the White House. The president invited transgender, gay and abortion activists to greet the pope. This put the pontiff in a difficult political situation to which the Vatican objected.

Among those who were invited to greet the pope was Gene Robinson, the gay Episcopal bishop whose consecration as an openly gay bishop in a relationship helped escalate the breakup of the American Episcopal Church. Robinson, after helping break up the Episcopal Church, got divorced. Likewise, Obama saw no problem inviting pro-abortion and pro-gay Catholic activists to greet the pope. These people are in active, celebratory rebellion against the Catholic Church and its pope, who maintains his strong belief in the sanctity of traditional marriage and life.

After the pope's visit comes the Chinese Premier, who has increasingly oppressed Christians in China and oversaw major computer hacking against the United States. Obama will not invite Falun Gong, Taiwanese or Tibetan activists to greet the Chinese Premier. This is the same president of the United States who sent the Dalai Lama out the back entrance of the White House by the trash dump to avoid offending the Chinese.

Likewise, the president has been mute on Cuban dissidents. His outreach to the totalitarian thugs in Cuba has been devoid of any action to improve the lives of democracy advocates in Cuba. He and his secretary of state go to great pains to avoid that issue.

Time and time again, the president makes great speeches, but he only takes the moral high ground when it is easy and of no consequence or when it makes his own countrymen look bad.