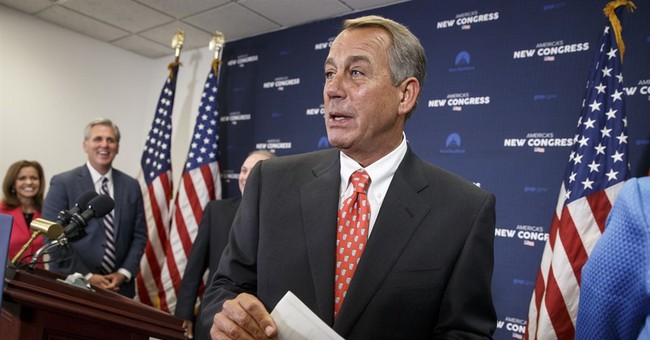 Trending
This past week, the national media and the Republican base both scratched their collective heads perplexed by the un-anchoring of the Republican Party. The climax came last Wednesday night, 12 hours before pro-life supporters gathered en masse in Washington, D.C. for the annual March for Life.

Republicans had promised to pass the Pain-Capable Unborn Child Protection Act. They passed the legislation in 2013, but Senate Democrats then blocked it. The legislation would prevent most abortions after five months of pregnancy because most scientists agree children can, by that point in their development, feel pain. It seems cruel to kill a child, in sometimes gruesome ways, when the child can feel it.

In 2008, President Obama said ending late-term abortions was the type of pro-life legislation he could support. But last week, in the run-up to the vote on the legislation, Barack Obama signaled this was another statement of his with an expiration date. He threatened to veto the legislation. Republicans had a perfect opportunity to put the President on defense on an issue upon which the GOP usually plays defense.

But last Wednesday night, House Republican leaders pulled the legislation. They did so largely thanks to Rep. Renee Ellmers (R-NC). In Texas, State Sen. Wendy Davis tried to stop a statewide version of the legislation through a filibuster. She became a national heroine for the pro-abortion movement and media. She ultimately failed while earning the moniker (from me) "Abortion Barbie."

Ellmers has succeeded where Davis failed and is now the Republican Party's own "Abortion Barbie." Ellmers first claimed that millennials opposed the legislation. When polling showed otherwise, she pivoted. Ultimately, she caused enough Republican moderates to walk away from the legislation that the Republicans could not get it passed. If that was not audacious enough considering Ellmers had run as a "pro-life" candidate, she then released a statement claiming she would have voted for the legislation she helped scuttle.

Mollie Hemingway, a writer at The Federalist, noted everyone should be worried by the House Republicans' action. The measure has overwhelming popular support; the GOP campaigned on the issue; Renee Ellmers herself voted for the identical legislation in 2013; but the GOP could not pull it off. That level of incompetence bodes poorly for legislation that does not have popular support.

This was the climax. Preceding it was the other issue Republicans are known for -- taxes. Not wasting any time after being sworn in, a number of Senate Republicans expressed their interest in raising taxes. Most specifically, the senators said they wanted to raise the gas tax. They are not alone.

In Nevada, citizens rejected a ballot measure that would raise taxes for education. With the start of the new year, just re-elected Gov. Sandoval has declared the legislature should do what the citizens rejected. He is floating a proposal for significant tax hikes in Nevada.

In Georgia, Republicans are waffling on passing a state version of the Religious Freedom Restoration Act, which has bipartisan support and is hugely popular among Republican voters. At the same time, behind the scenes, members of the state legislature are angling for a tax hike to fund transportation cronyism. Rumors within the legislature are that the Republican Leadership will drag their feet on a budget and then ram through tax hikes at the last possible moment, hoping fears of a budget crisis will push wavering Republicans to support it.

If Republicans do not support the pro-life cause and are willing to both reject protections for religious freedom while raising taxes, what do they stand for anymore? Perhaps a 2016 candidate will give Republicans restored purpose. For now, the party is adrift.