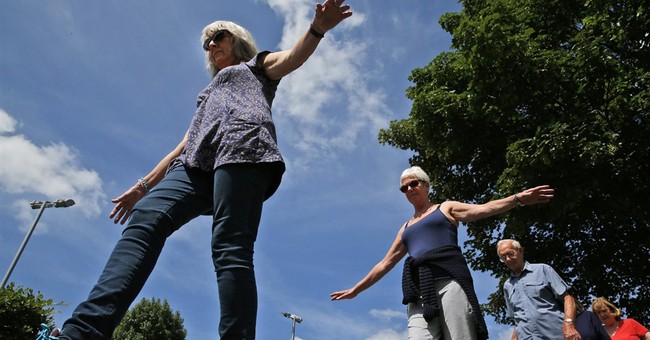 The United States had a cold war to win against the Soviet Union. For several decades, students were taught to dive under their desks should a nuclear bomb go off. People built bomb shelters. Americans got so tired of the containment strategy, they took a gamble on a guy from California whose strategy was simple: "We win. They lose."

President Reagan did win the Cold War. His Vice President, George H. W. Bush, swept into office promising to finish what Reagan started. The Berlin Wall fell. Then a threat sparked in the Middle East. Bush stormed into Iraq, freed Kuwait and saw approval ratings in the 90s. Then his ratings came tumbling down when the recession started and when people realized he was not Ronald Reagan.

Americans decided they no longer needed grownups to keep them safe. We won. The threats were neutralized. Bill Clinton and Al Gore became the faces of a younger post-Cold War America. Clinton may have been a philanderer who did not inhale, but he was laid back, cool, and the nation was entitled to finally relax. So we did.

Islamic radicals attacked the World Trade Center, the Khobar Towers, several of our embassies and the USS Cole -- the nation started to sense we needed to be more grown up again. The good times were over. A slight majority was willing to go with Al Gore, but he lost the Electoral College to George W. Bush, whose campaign slogan was "help is on the way."

Within eight months of his inauguration, more Islamic radicals brought down the World Trade Center. Serious times were back. Bush promised to keep the country safe, and the nation stuck with him in 2004. But by 2006, a war-weary nation decided to make a change. In 2008, the Republicans promised more war, and the Democrats offered hope and change between Greek columns.

Barack Obama promised that, with his election, the world would begin to heal and the oceans recede. In the first two years of his administration, when Democrats controlled everything, all he and his party accomplished was destroying the American health care system that had been the envy of the world.

Now they tell us the oceans are still rising and we are all going to die, if not by government death panel, then by hurricane.

Meanwhile, around the world, nearly seven decades of peace are starting to crumble. China is rattling its sabers. Russia has taken Crimea, invaded Ukraine, and is threatening the Baltic nations. Turkey is drifting away from its secular state. Iran is on the rise. Israel is threatened. Commercial airliners are missing from Libya. Now ISIS is chopping off heads throughout the greater Middle East.

Americans are starting to long for adults again. They want someone to tell the president that he has homework to do and cannot go back out to the golf course this afternoon. Polling suggests the public still does not care for Republicans, but the public is willing to cast its lot with the GOP if only to hold the president accountable.

In fact, Republicans never win national elections on their domestic politics. Tightening belts, cutting taxes, and cutting government in and of themselves sound like buzz kills. But getting government off the back of the people, sealing the border and keeping us safe are what grownups do.

Moms in Middle America are worried. For the first time in our history, they do not think their children will be better off than they were. That bothers them. They are worried about their jobs, their husbands' jobs, their children's education and their safety. They see a president on a golf course and a Washington establishment peddling hope while picking the American carcass clean.

A sense of fatality has set in on the public consciousness. Americans want someone who does not just say they believe in the greatness of America, but actually believes it. Those people do not exist in high number in Washington. Americans know the answers will not come from there. Americans want grownups back in charge and, right now, it looks more like Republicans are grownups, even if they are not the popular kids.