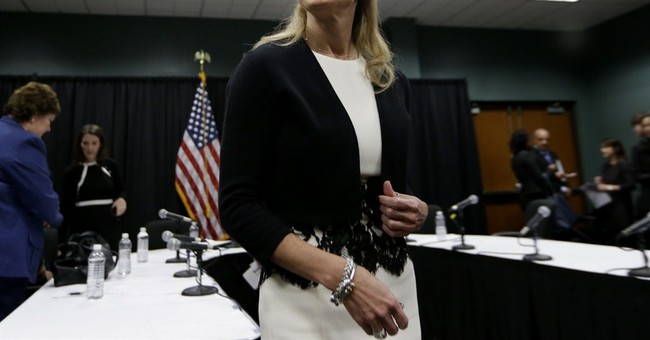 In 1904, J.M. Barrie introduced us to Wendy Darling, who went with Peter Pan to Neverland. Now, in 2014, Democrats have conjured up Wendy Davis from Fairy Tale Land. They have made her, a Texas state legislator, their choice for Governor of Texas. Wendy Davis filibustered pro-life legislation in Texas while wearing pink sneakers. The press chose to fixate on her Barbie-like looks and pink shoes rather than on the extreme position she holds. Davis takes the position that children can be ripped apart in utero even if they could feel the pain or survive outside the womb.

Maria Shriver recently profiled her for the Today show. In a piece of propaganda and free publicity for Wendy Davis — a glorifying treatment her Republican opponent can be assured of never getting — Shriver dwelled on the biography Davis and her supporters put out there. She got married early, divorced at 19, lived in a trailer, got remarried, worked her way through Harvard Law School and became a pink-shoe-wearing success.

But that story is a fairy tale. It simply is not true. Davis's campaign now says she misspoke. She misspoke repeatedly and for several years. She did not get divorced at 19. She barely spent time as a single mother living in a trailer. She did not put herself through Harvard, but relied on her second husband to pay her tuition.

Under oath in federal court while fighting Texas's congressional redistricting, Wendy Davis testified that her father divorced her mother without paying child support. Like much of the rest of her biography, this too was fabricated. In fact, her father's child support payments kept the family above the federal poverty line in 1975, contrary to Wendy Davis's assertions.

Davis and her second husband had a daughter.

Her second husband sent her to Harvard for a law degree, paying the bill by cashing in his 401(K) and taking out a loan. Once out of law school, the couple divorced, with Mr. Davis citing adultery by Wendy Davis and asking the court to give him custody of their child. Their daughter likewise wanted to stay with her father. The court also entered a temporary restraining order that ordered Wendy Davis to refrain from drugs or alcohol at least 24 hours before visiting her child.

A friend told the Dallas Morning News that Wendy Davis would not let children stand in the way of her own ambition.

Davis blames her Republican opponent, Texas Attorney General Greg Abbott, for the revelations of her real biography. The reporter who first broke the story said he never talked to Abbott's team. Nonetheless, Wendy Davis declared Greg Abbott had never walked a day in her shoes. Greg Abbott has been a wheelchair bound paraplegic for 30 years.

The truth is, Wendy Davis' life is more common than most people realize. She and her supporters decided to run from her real biography. The left heralded Wendy Davis as a feminist hero based on pink sneakers and a filibuster. They conjured from Fairy Tale Land her story as a hard-working child of an impoverished single mom who then became a single mom herself, lived in a trailer, pulled herself up and went to Harvard. Now, instead of simply declaring her story exaggerated, the left is claiming Davis is being held to a double standard or they are simply screaming sexism. Wendy Davis, the feminist hero, is reduced to playing the role of victim, victimized by her own fabrications being confronted with truth.

The media who heralded Wendy Davis is left blaming inanimate objects for her fictitious biography. An Associated Press headline read, "Wendy Davis' Story May Have Misstated Details." Stories do not misstate. But Wendy Davis did repeatedly.