Erich Reimer
|
Posted: Aug 28, 2018 12:01 AM
Share   Tweet
The opinions expressed by columnists are their own and do not necessarily represent the views of Townhall.com. 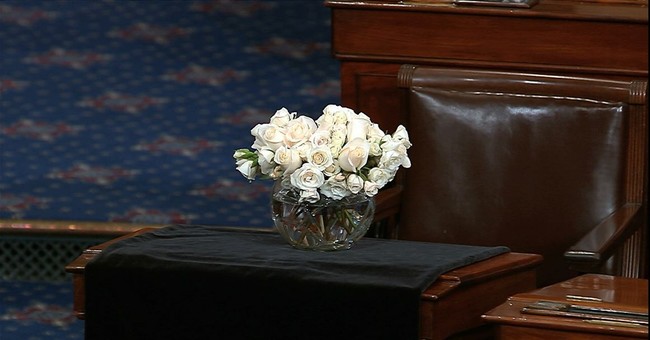 “Fellow Americans' -- that association has meant more to me than any other. I lived and died a proud American.”

So read part of Senator John McCain’s final statement, as the 81-year old Senator from Arizona joined the eternal pantheon of patriots this past weekend. After lying in state for several days at the U.S. Capitol and Arizona Capitol, he will be buried at the U.S. Naval Academy, where he graduated from over a half-century ago before serving our nation as a decorated war hero.

Senator McCain has been in our public square for so long it will be difficult to imagine our politics initially without him. His decades in the United States Senate were not quiet ones, but rather prominent in that he made a name for himself as a “maverick.” He put always what he personally believed first above the political pressures, even when it meant fighting his own party, although when he felt the other side was nefarious he showed them no quarter either.

Many of us are well aware of Senator McCain’s military service that was so distinct and powerful that many still find inspiration from it in this day and age. The son of prominent Navy Admiral John Sidney McCain, he followed in his father’s footsteps and flew planes in the Vietnam War. It was reported that McCain requested a combat assignment purposefully, even though clearly as the child of an active-duty Admiral at the time he could have had more sanguine duties.

He was shot down and captured in 1967 by the North Vietnamese and then subsequently imprisoned and tortured for years until his release in 1973. During this time he could have easily gained release as was often used to try to lure him, but he refused in service to his fellow service-members and his country.

In terms of policy and rhetoric it would be difficult for any of us to agree with anyone in this country on every point. However in the end one of the most important characteristics remains character, as imperfect as we all are.

Senator McCain undoubtedly possessed character and integrity. It was sometimes rough-worn and possibly brash, but given the combat and horrors he saw and fought through the seeming political correctness and ‘softness’ of some civilians in our public discourse must have seemed pathetic if not amusing.

Our nation has hundreds of federal elected representatives and high-ranking government officials as well as thousands more at the moment on the state and local levels. Then there are the tens of thousands of leaders that have strung together American history to this point.

Among those undoubtedly Senator McCain holds a particularly respected mark, as his dedication to his values and his unabashed honesty and integrity inspired admiration in those on both sides of the aisle, as evidenced by the thoughtful statements of respect issued by those ranging from his once-fierce political opponents such as Former Presidents Barack Obama and George W. Bush, as well as countless others on both sides of the aisle.

In terms of policy, Senator McCain never wavered from supporting our military, service-members, and veterans, as well as a strong American foreign policy that keeps peace and freedom across the world. Indeed in deference to that long record the upcoming fiscal year’s military budget is named after him.

In terms of personal leadership however his example of duty to country is inspiring, as he really did devote his life to fighting – literally – for our nation in the service in such decorated fashion and then in the largely thankless job of elected office. Many lawmakers enter public office with an eye towards highly profitable exit options – for Senator McCain, he seemingly never intended to or did ‘cash in.’

Senator Chuck Schumer (D-NY) wants to add Senator McCain’s name to the Russell Senate Office Building in Washington, D.C., where the offices of many of our Senators are. I think that is a worthy tribute to an American hero we can unify around at a time of such division in our public square.

Senator McCain’s powerful patriotism and dedication to serving the people of the United States has undoubtedly inspired many, including me, and will continue to do so. Rest in peace in Heaven Senator, where you now join the great heroes of our nation’s past.