From a Virginia Republican: What Happened Last Tuesday and What it Means

Erich Reimer
|
Posted: Nov 14, 2017 11:33 AM
Share   Tweet
The opinions expressed by columnists are their own and do not necessarily represent the views of Townhall.com. 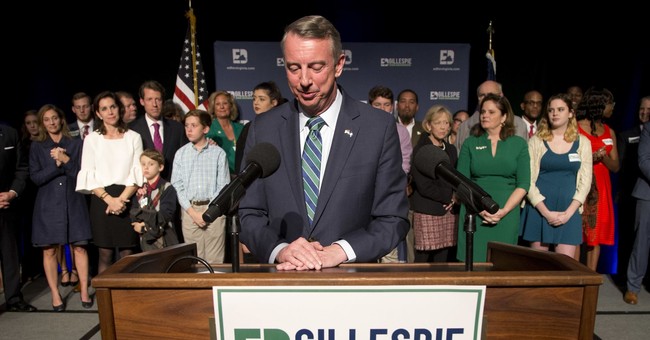 Unfortunately this past week Virginians rejected Ed Gillespie, one of the most vibrant and forward-looking GOP candidates in modern American history and a long-time cornerstone of the conservative movement.

With the 2018 elections right around the corner, Republicans nationwide are trying to read the wreckage and see how they can best position themselves for the upcoming midterms.

Ed Gillespie received the most votes for any GOP gubernatorial nominee in Virginia history. He ran on a campaign that emphasized a deep understanding of economic and regulatory policy, an inclusive “For All Virginians” attitude towards groups long-neglected by the GOP, and an optimistic vision for what Virginia and America could be.

Amid a disunited and gaffe-ridden campaign by the opposing Democrat ticket, Gillespie ran with the support of a united Virginia GOP and nearly every Republican across the country, ranging from President Trump to President George W. Bush and countless others.

Gillespie also was endorsed by almost all of the state’s major newspapers, Northern Virginia business and technology trade associations, and political legends such as Former Senator John Warner, all of whom had sat out Cuccinelli’s 2013 gubernatorial race or endorsed McAulliffe.

Sadly in the end, despite constantly fluctuating polls, Gillespie and the rest of the GOP ticket were unable to overcome an already-unfavorable landscape for traditional Republican campaigns combined with massively increased turnout for Democrats, thanks in part to the election’s nationalization.

According to exit polls, 47 percent of voters said Trump was not a factor in their vote and 17 percent said they voted in part to express support for Trump. Among both groups, Gillespie won by massive margins. However among the 34 percent who said they went to vote in part to express opposition to President Trump, Gillespie lost 97 percent-2 percent.

Gillespie even lost Chesterfield County, a massive suburb of Richmond and long a GOP stronghold that has not voted for a Democrat since 1956.

Virginia’s results may be disappointing, but they aren’t surprising. Virginia over the years has changed economically and structurally in many ways that make it a far more favorable landscape for Democrats. It is no longer the state that voted twice for George W. Bush or even for Bob McDonnell in 2009.

As part of Virginia’s Republican political community and having worked as part of Ed Gillespie’s campaign the past one and a half years, the disappointment in Virginia is real. Beyond Gillespie, many excellent candidates and legislators lost their seats as their districts, particularly in ever-growing Northern Virginia, that went blue in 2016 went blue once again this year.

Undoubtedly the major takeaway from Virginia is that despite early efforts to de-nationalize the race and make the campaign a referendum on Ed Gillespie and Virginia in particular, in the end the national coattails in a state where President Trump has consistently had an almost 60 percent disapproval rating simply were overwhelming and impossible to disassociate.

While this trend may help candidates in states that Trump won, like Michigan and Wisconsin, in a state like Virginia that Trump lost, the effect netted out to be negative. Even with the increase in turnout from Trump voters in rural areas compared to past elections, the even more massive turnout boost in metropolitan suburbs wiped out all those gains.

Democrats appear to indeed be excited, angry, and ready to vote. I remember the feeling back in 2009 and 2010, being around DC at the time, as Republicans across the country were expressing dissatisfaction with Obamacare. Democrats ignored such sentiments to their peril, with the eventual wipeout in 2010.

Republicans have a tough battle coming next year. We need to be ready, from D.C. to our communities, in preparing to advance our agenda for life, liberty, and the pursuit of happiness.