Emmett Tyrrell
|
Posted: Jan 02, 2020 12:01 AM
Share   Tweet
The opinions expressed by columnists are their own and do not necessarily represent the views of Townhall.com. 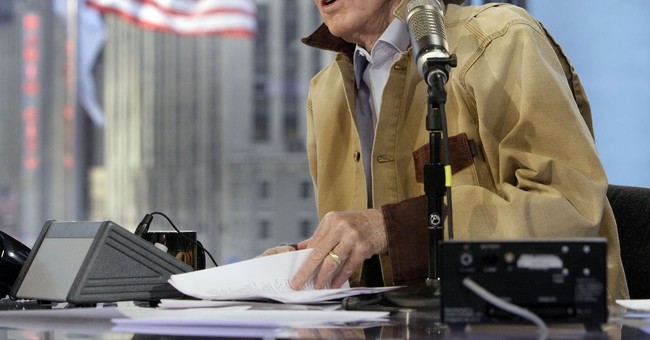 Washington -- This past Sunday brought the news to the front pages of our leading newspapers of the passing of shock jock Don Imus. Comparatively speaking, it was happy news. At least, it was happy news compared with the news that otherwise adorns the front pages of The Washington Post and The New York Times and is then repeated and repeated in the newspapers' interior pages.

Most of the stories these dolorous journalists cover are stories of squalor, grief, travail and out-and-out evil. Do you doubt me? See how many cheerful stories you can find either on the front pages or on the later pages of your newspaper. That is, if you still read a newspaper. Most of the stories will reflect the concerns of their editors and writers who are generally unspeakably gloomy and consumed with conveying their gloom to their readers.

So the death of Imus was a refreshing break from the newspapers' morbid daily fare. No wonder they are having a difficult time finding readers. Try, fellows and fellowesses, to present the world with an occasional wink.

Imus was a man with a sufficiently dismal view of the world to serve as editor of either of our major newspapers, though I am not sure that his work habits would fit well with the habits necessary for the grind of a daily newspaper. He had bouts with alcohol, cocaine and depression, and he was often photographed wearing cowboy dress ... indoors. He actually wore a cowboy hat in the studio. Also, one of the obituaries reported he walked around his office in his undershorts. Let us pass on to his so-called humor.

Years ago, I had an occasion to comment on his humor when he got himself into trouble. I called it "bleak humor." In his obituaries, the obituarists made a major point of Imus' sense of humor. One, from The New York Times, seemed to be particularly smitten by it. You be the judge.

Imus called Dick Cheney, the former vice president, "a war criminal," which is untrue and leaves Imus sounding like a standard-issue left-wing Democrat. He called Steve Forbes "a mean-spirited creep," which, again, is untrue and leaves me wondering if Imus knows what mean-spirited means. He called Rush Limbaugh "a drug-addled gas bag," a description better aimed at Imus himself. He described Oprah Winfrey as "a fat phony" and Ted Kennedy as "a fat slob." Well, I have been led to believe that obesity is a disability, and to call the former Lion of the Senate a slob might be meant by Imus as a compliment. Saying Newt Gingrich is "a man who would eat roadkill" is at least funny, but as with Imus' claim that Hillary is "Satan," it lacks wit and imagination. As I have said, his humor was bleak.

What got the famed shock jock into trouble back in 2007 was his reference to black women athletes as "nappy-headed hos." Again, there is no truth to his description, or at least no discernible truth to it, and if his audience did greet the remark with laughter, it was most likely nervous laughter. Nervous laughter is often the result of extraordinary rudeness, and such rudeness is often a comic's attempt at a cheap laugh. Apparently Imus took this route rather often.

Imus was, of course, another of the broadcasting media's phony tough guys. After his line about "nappy-headed hos," he immediately collapsed into what I called a "whimpering bundle of apologies." His rush for a cheap laugh put me in the uncomfortable position of siding with Barack Obama, who responded to Imus with, "He didn't just cross the line. He fed into some of the worst stereotypes that my two young daughters are having to deal with today in America." Well, I am not sure of your daughters, Mr. Obama, but I am in agreement with you on the stereotypes.

Why would these newspapers put Imus on their front pages and devote more space to him than they devote to a four-star general, a business leader or any other distinguished citizen? The reason is simple. Don Imus spoke for the media's constituency of morbid, unimaginative pessimists. As I say, his humor was bleak -- exceptionally bleak. There was no joy or wit in it. Now he is dead. And that jolly commentator, Rush Limbaugh, took his place long ago as America's most followed radio commentator.