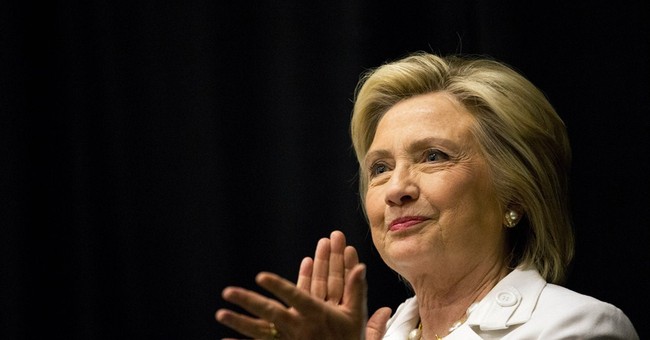 What did I tell you a couple of weeks ago? In fact, what have I been suggesting for months? Hillary Clinton is going to have a very tough time winning her party's nomination.

Since we have been appraising her looming presence on the campaign trail, a growing number of scandals have been revealed. They have surprised even me -- though, truth to tell, any seasoned Clinton watcher has seen their precursors reaching all the way back to her Arkansas days: lying, secreting evidence from investigators, funny money (and lots of it), campaign contributions from shady characters (some foreign, some felons), and being asleep at the switch during Benghazi. I suppose the Benghazi contretemps was an evolutionary breakthrough for her, but then she had never been secretary of state before.

Now she is confronting the real tests. Since the reporting of Clinton's latest scandals, her polling figures have dropped precipitously. According to a recent CNN/ORC poll, 57 percent of those queried do not trust her. That is an increase from 49 percent just two months ago. Only 47 percent say she cares about them, down from 53 percent in March. Fifty percent say she does not inspire confidence, an increase from 42 percent in March.

More voters have an unfavorable view of her now than at any time since 2001. That was when the Clintons were in the headlines for stealing White House property and granting dubious pardons. Her campaign is but eight months old. She says she has spent the time getting acquainted with ordinary Americans. The evidence is that she should avoid contact with them. The more they get to know her the less they like and trust her.

Now the straw polls begin. Earlier in the month, Sen. Bernie Sanders, being the candidate from the Occupiers' Movement, came surprisingly close to beating Clinton in a straw poll of Democratic Party leaders in Wisconsin. Even without the help of street demonstrations and public lewdness, he snagged 41 percent of the vote to Clinton's 49 percent.

As I noted last month, Sanders is the Gene McCarthy of 2016. A combination of Sanders' attacks on her and the drip-drip of revelations about the Clintons' scandal-plagued past will leave the former secretary of state bloodied and discombobulated as she approaches the New Hampshire primary.

Actually, the Democratic Party bigwigs and their amanuenses in the mainstream media have been growing apprehensive about Clinton's candidacy for weeks, and her tedious speech over the weekend to a so-so crowd did not relieve their apprehensions. Frankly, as she recited her endless list of often-contradictory promises to a heavily middle-class crowd of mostly white people, I was reminded of the Democrats' taunts of Republicans at similar events. "Too white, too white" -- Republican audiences are always "too white."

Yet such Republican events are usually taking place in the Midwest or the South. Clinton was in New York City. Could she not have asked the Rev. Al Charlatan to gather up some of his nearby parishioners? What about visiting tourists from Latin America or Africa? Appearing in the audience for a Clinton campaign kickoff would be the highlight of a fuliginous tourist's trip to New York. Did Clinton's advance personnel have no premonitions about having her address so white an audience right there in New York City, a stone's throw from Harlem?

From my conversations with Democrats and media types, I sense their unease with Clinton. They would rather not talk about her problems. They acknowledge them, but rush on to cite the multiplicity of candidates in the Republican field. My answer to them is that a multiplicity of good candidates is better than the Democrats' scarcity of candidates. They know I am right, and in the weeks ahead, their unease will grow.