The Shock of Christmas 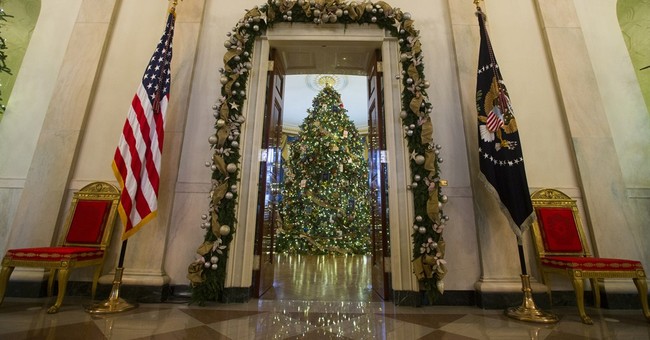 Alas it is over. I am speaking of the Thanksgiving Day celebration -- one of my favorite holidays. It is a serious celebration as we give thanks for our many blessings. Yet it is also a jolly day, full of good food, drink and sport -- perhaps touch football, more likely a televised game. The whole family comes together and, often in the company of friends, has a festive time. Moreover, there is a venerable sense of tradition to the feast that renders the whole holiday somehow reassuring.

However, now comes a time troubled by a deep sense of apprehension, especially for people of faith. I am speaking of the Christmas season. The apprehension begins with how we greet people? Last week it was customary to say, "Have a Happy Thanksgiving" or just "Happy Thanksgiving." I must have intoned that line a hundred times, never with a premonition of giving offense or of introducing an evangelizing spirit into a brief social encounter. "Happy Thanksgiving" might be prefatory to devastating a plump bird, but only the very morbid are offended and they can always munch on a nutrition bar.

Now, after Thanksgiving Day, thoughtful people are given to pause. Does one greet another with "Merry Christmas"? In some parts of the country it is deemed rude, even belligerent. Play it safe and try "Happy Holidays" or, maybe, "Happy Winter." That last absurdity has been trotted out, admittedly at the fussy suggestion of educators in the Stalinist northeast. Some of the comrades have even created an entire pageant around an imagined winter holiday as opposed to the traditional holiday of Christmas.

Thanksgiving causes no such unpleasantness, though I do not know why this should be so. Most of us sitting down to our traditional turkey are offering thanks to God. That has been true ever since President Abraham Lincoln made the last Thursday in November a federal holiday as he put it of "Thanksgiving and Praise to our beneficent Father who dwelleth in the Heavens." Who do the cavilers think we are offering thanks to, the giant corporations? Wall Street? Big Bird? Well, if we were, that should disturb them as much as a hearty "Merry Christmas." You can be sure that the kind of person who objects to "Merry Christmas" also usually suffers similar psychological tics about the giant corporations or Wall Street bankers. The same cavilers who have created such a stir over Christmas are usually full of animus about capitalism and other organizing principles of American society.

When one considers the enormous lengths to which some people have gone to make Christmas a controversial occasion one has to pause and wonder what the controversy is all about. There are certainly non-believers who take the holiday in stride: Jews, Muslims, atheists, even the "who-cares" members of American society. Some of the aforementioned probably even take in elements of Christmastime, for instance, gift-giving, mistletoe and eggnog.

I think we get a sense of what the Christmas controversy is about when we look at the reductio ad absurdum of the controversy. That is when we see the cavilers trying to ban the Christmas tree, Rudolph the Red-Nosed Reindeer, and perhaps Frosty. What is so religious about a Christmas tree? The tree may not be religious but it is traditional in America at this time of year, and now we are getting a glimpse of the true animating spirit of Christmas' opponents. They do not much like traditional America. They want to reform it. They want to take down the manifestations of a revered and ancient holiday and replace them with, well, with nothing. What would they put up in the place of the infant in swaddling clothes, choral music and that infernal tree?

American leaders and the American people have reason to celebrate Christmas at the end of every year for various reasons, some solemn some trivial. As for the solemn reasons, remember the prayer offered up by the president of the United States as America embarked on the last year of World War II. Though Franklin Roosevelt was not a Republican, I think many Republicans today can share his sentiments when he said on Christmas Eve, 1944:

"It is not easy to say 'Merry Christmas' ... tonight to our armed forces at their battle stations all over the world -- or to our allies who fight by their side. ... [Yet] the Christmas spirit lives tonight in the bitter cold of the front lines in Europe and in the heat of the jungles and the swamps of Burma and the Pacific Islands." Our soldiers "know the determination of all right-thinking people and Nations, that Christmases such as those that we have known in these years of world tragedy shall not come again to beset the souls of the children of God. ... We pray that ... God will protect our gallant men and women in the uniforms of the United Nations -- that He will receive into His infinite grace those who make their supreme sacrifice in the cause of righteousness, in the cause of love of Him and His teachings."

So "Merry Christmas" my Democratic friends, and Independents, and, certainly, Republicans.