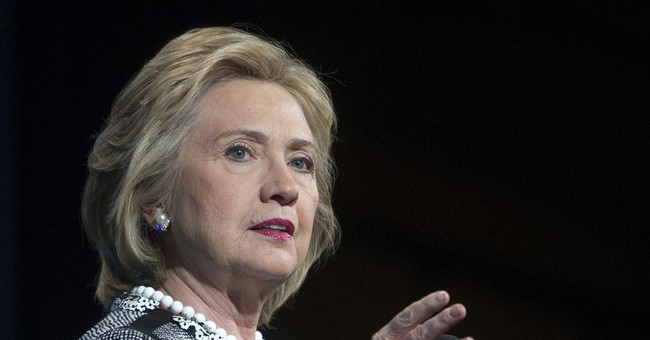 WASHINGTON -- As I reflect on the "inevitable" presidential candidacy of Hillary Rodham Clinton, I try to put it in historic context. She lacks the shifty eyes, darting hither and yon at her audience and the assembled press corps. Her brow betrays no beads of sweat. Nor is there any noticeable perspiration on her upper lip. She has never exactly said, "I'm not a crook." Though she has certainly slipped up with plenty of other maladroit pronunciamentos, from her famous 1992 boast, "I suppose I could have stayed home and baked cookies," to her more recent rant before a Congressional committee investigating Benghazi: "What difference at this point does it make?" Let me hasten to answer that it does indeed make a difference how violence originates in a faraway land where four Americans were about to be murdered.

Yet, curiously enough, by now she is the Democrats' closest approximation to President Richard Milhous Nixon. In fact, she and her husband probably trail behind them more baggage than even Nixon did. He resigned before being impeached. The Clintons brazened it through before Bill was finally impeached. He was not convicted, however, and -- almost miraculously if you can remember what even Democrats were saying about them -- the Clintons continued their amazing political lives. Though they acquired still more baggage.

There was in 1968 a New Nixon. There was even a New New Nixon in the years ahead. Once in retirement, when he turned to being an elder statesman, there was a New New New Nixon. It was a Nixon seasoned by experience, and he became a counselor to Prime Minister Margaret Thatcher, to President Ronald Reagan and to others.

Now, with all her baggage trailing behind her, it is only a matter of time before Hillary is forced to rebrand herself. All those years, dating back to Arkansas politics, will prove too much. Actually, they began even before Arkansas, way back in 1974 when she served on the House Judiciary Impeachment Inquiry, inquiring into, well, Richard Nixon. When it was all over, the Democratic counsel to the committee, Jerome Zeifman, wrote in his personal evaluation of Hillary that he "could not recommend her for any future position of public or private trust," so "ethically flawed" and deceitful was her service to Congress.

Hillary's scandals have continued apace for 40 years, and Bill's, too! So perhaps you will understand when I say that in comparison with Nixon the Clintons come off rather the worse. There have been campaign finance violations from their Arkansas days right up to the present when a Hillary supporter, Sant Chatwal, pled guilty to witness tampering and to using straw donors to funnel money into her 2008 campaign. There have been appearances before grand juries. There have been tricky real estate deals, payoffs from friends such as Jim Blair, missing billing records, exorbitant speaker fees, foundation funny business, extensive use of private investigators, endless lies. Friends have even gone off to jail.

So you will forgive me if I suggest to a person who has already given me so many pleasant memories, that she is ripe for a rebranding. It would be artless to suggest the "New Hillary." That would be too close to the New Nixon or the New New Nixon, but how about the "Novel Hillary" or "Hillary 2.0"? In this forthcoming campaign, there will be questions about Benghazi and other foreign policy disasters when under her tenure at State.

I can hear it now. A candidate, borrowing her taunt of Barack Obama in 2008, will ask where was she on Sept. 12, 2012 at 3:00 a.m. She (and the president, too) surely should have been in the situation room, no? And two weeks ago, Monica made an appearance. In the forthcoming campaign, there will be questions also about Paula Corbin Jones, Kathleen Willey, Gennifer Flowers, Juanita Broaddrick, and legions more. Also questions were raised about her health last week. On the campaign trail she will be questioned about her blood pressure, her heart rate, her blood sugar levels. What does she do in her weekly workout? Bill said last week she works out once a week. It must be a pretty amazing workout.

Yes, I can see the need for a rebranding. I rather favor "Hillary 2.0." It is so au courant. Call it my contribution to Hillary's inevitable candidacy.