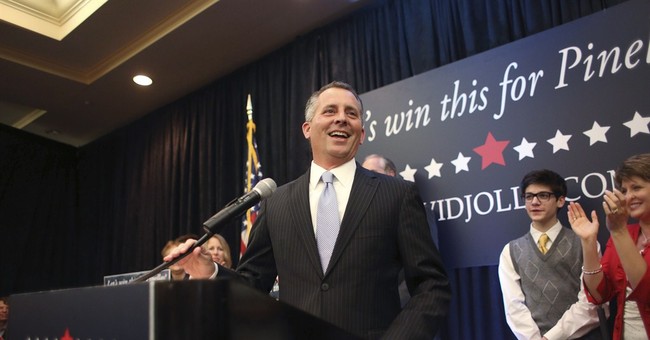 WASHINGTON -- The Republicans would nominate as their candidate for the recently contested House seat in Florida a candidate with the celebratory surname of Jolly. David Jolly to be exact. Needless to say David Jolly won. Perhaps his victory will establish a trend. According to the trend, the Republicans will be running candidates with surnames like Happy, or Joyous or even Gay. Imagine a wave election -- as political commentators are predicting 2014 to be -- in which the Republicans run candidates with the aforementioned names: Happy, Joyous, Gay! Imagine a future House of Representatives where the dialogue might run: "Speaker Jolly, I should like to propose an amendment to your bill on noxious particulates in the atmosphere," says the Hon. Happy. Responds the Hon. Jolly, "By all means do so, Mr. Happy." It would be a new dawn for the Republic.

Of course the Democrats were out to win the Florida district, and they thought they had it in the bag. President Barack Obama had swept to victory twice in the district. It was thought to be marginally Democratic. The party nominated a successful businesswoman, Alex Sink, who in her 2010 campaign for governor won 49 percent of the vote in the district. She only lost the governor's race by a whisker, and believe it or not, Jolly was not the Republicans' favored candidate. They preferred three earlier candidates. Moreover, Sink outspent him 4-1 in advertising, Jolly has been in the throes of a bitter divorce, and he is dating a young lady 14 years his junior. Nonetheless, Sink lost to the candidate with the dulcet name, Jolly. As I say, it could be the harbinger of a trend.

Yet if we do spy a trend here it will be for heftier reasons than the candidates' last names, though Sink is admittedly not nearly as agreeable as Jolly. I think the trend that is coming this November issues from the president's declining popularity. He is now below 40 percent. Then there will be the factor of lower turnout. In a presidential year the Democrats can count on the stupid vote, the youth vote (often one and the same) and, of course, the angry women's vote. In this election they will not be able to rely upon their presidential base. Finally, there is the question of the independent vote or the moderate vote.

These voters are today more numerous than they have been in recent decades. In 2010 -- a game changer, as they say -- they registered around 35 percent of the vote. Then they voted heavily Republican, and the result was a Republican House of Representatives. This year they register 40 percent in the polls, and it appears they are leaning even more heavily toward the GOP. The independent or moderate voters seem to shy away from the Republicans on social issues, but for them one issue trumps all others. These voters are intensely interested in economics. Government spending, federal deficits and the value of the dollar really concern them, particularly the value of their dollars.

On all these points they are alarmed by the Democrats' performance. What has made them particularly alarmed is Obamacare. Talk of losing their health insurance, paying higher premiums and losing their doctors is driving them to the Republicans, and the Democrats know it. Maybe the Democrats are smug and unperturbed in Manhattan, but elsewhere in the land they are feeling queasy.

Here in Washington, the Democrats fear a rout mainly over domestic policies that the community organizer, Obama, has championed, but increasingly for foreign policy issues, too. The cleverly named David Jolly essentially ran on one issue, Obamacare. That drove the independents and the moderates to the Republican candidate. In the rest of the country the big issues this November will be Obamacare, the insolvency of state and federal budgets and possibly foreign policy. On each issue the independents and moderates will vote as they did in 2010, only in larger numbers. My guess is that 2014 will be a historic election.