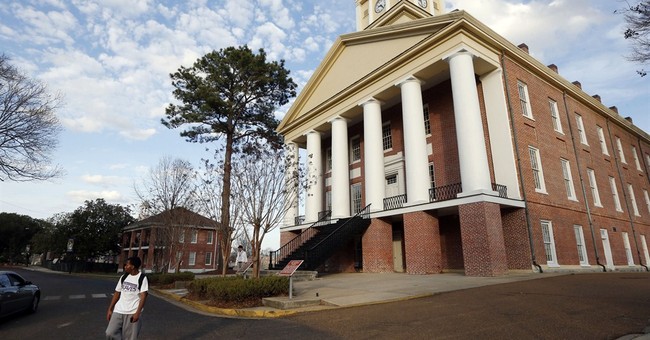 WASHINGTON -- From time to time, I put down my duties of writing about politics and other human follies and pick up a book, often a book of poetry, often by W. B. Yeats. The other night I read Yeats' poem "The Fiddler of Dooney." It is a little masterpiece, but then Yeats wrote so many masterpieces. It begins:

"When I play on my fiddle in Dooney,

My cousin is priest in Kilvarnet,

And on it dances for a few more stanzas, delighting the eye and the ear and the mind. Yeats obviously chose each word with the utmost care and gave his words a structure that was finely disciplined -- good show W. B.!

Yet there are perverse profs among us who lecture that the poet's words and structure could be cat scratchings on the page or hieroglyphics composed by a drunk. The words have no universal meaning. These profs call themselves "deconstructionists," and those who are not out-and-out frauds are obviously mental defectives. Readers under their spell could read Yeats, but they could also find meaning in chicken entrails, and you can eat chicken entrails. That is why I am taking immense pleasure in the revelations offered by a new book, "The Double Life of Paul de Man," by Evelyn Barish. I shall propose her for a Presidential Medal of Freedom once we get a proper president.

De Man was a knock-about litterateur in Nazi-occupied Belgium who after the war made his way to New York City, then to Bard College, then Harvard, and finally he landed at Yale where he was fabulous in advancing the cause of deconstructionism among the professoriate who, by the way, are pretty dreadful writers. There were a lot of these prehensile émigrés absconding from Europe after World War II. He died in 1983, which was lucky for him. Four years after his death it was discovered that while in Belgium he had written hundreds of literary articles for a collaborationist newspaper, one of which in 1941 speculated on what European literature would be like if the Jews were shipped to a remote colony. I doubt that de Man had Israel in mind. Of a sudden de Man's photo was appearing in Newsweek with photos of Nazi troops on the march.

Then things quieted down until Barish appeared with her book. Kirkus Reviews has called it the biography of a "master confidence man." She went back to de Man's early life on the Continent and found him indeed writing for collaborationists and even proposing an art magazine booming Nazi art. He was involved in various swindles and left Europe one step ahead of the law. In 1951, he was sentenced to five years in a Belgian prison for fraud, though by then he was plying his talents in New York City. He taught at Bard College, had affairs with vulnerable girls, and even married one, bigamously. He got his Ph.D. at Harvard where he occasionally skipped examinations, misrepresented his resume, and had his European record almost exposed. "He was," Barish told an interviewer "an enormously persuasive reinventor of himself."

Barish ends her book before de Man began his major teaching at Cornell and eventually at Yale, where he spread his theories of deconstruction like a smog. Yet she did say this about the imposter's philosophy. She apparently told the New York Times that she found that his philosophy -- "the idea that meaning cannot be pinned down" and that "clear-cut moral judgments are impossible" -- was "just a waste of time."