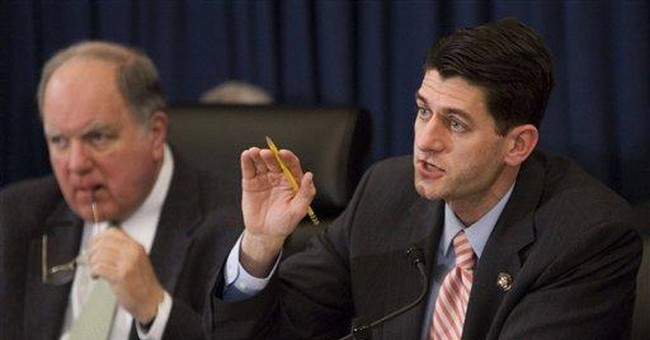 I am serious. If the art of Ofili, the British-born hustler, were reported as not art but animal waste, he might have learned the rudiments of art a long time ago and become an acceptable street artiste. If Biden were reported to have bungled yet again, he might not say such idiotic things. According to the Taranto Principle, biased liberal reporting brings out the worst in liberals and makes them ridiculous and often unelectable.

Now there has been a huge upsurge of awareness among Americans that we are broke. The president and his Democrats have rung up more debt than all the presidents who came before him. And that debt comes just as the cost of entitlements is coming due for the baby boomers. What has President Barack Obama done about it? He has brought down on the American people Obamacare. He saw how unpopular it was. His favorable ratings in the polls steadily declined, but he went ahead anyway. Now his favorable ratings are down to 37 percent, and he keeps on hollering. Come Tuesday, he will have only the White House staff on his side, and from that staff, there has already departed Rahm Emanuel, Larry Summers, Christina Romer and a handful of others who still can get a job.

The upsurge of awareness is led by the tea party movement. It is composed of fallen-away conservatives and independents, with a smattering of Democrats thrown in. They are a welcome arrival to the conservative movement. The American conservative movement has moved steadily from the outer fringes of American politics in the 1950s to the center. America is now and has been a center-right country. Do you remember but two years back all the talk about conservatism's being dead? At the time, conservatives outnumbered liberals by a 2-1 ratio.

The tea partyers' arrival is auspicious. There are structural changes in the federal budget that are going to have to be made, and they are aware of it. Had the liberal press not encouraged the worst in the liberal politicians, the tea partyers might not have been aroused to their present pitch of civic-mindedness. The liberals might have been able to muddle along building up debt. But the liberals came in with their wholly unfunded stimulus program, Obamacare and regulatory reforms that have impeded growth. The result is going to be a serious rethinking of the federal programs, and if we do not act, the tea partyers are pointing to Greece as our future.

Already the reforms are being discussed. The retirement age for Social Security will have to be raised and alternate funding studied. Personal retirement accounts will be considered. Vouchers have been suggested to fund Medicare for the truly poor, along with means testing and health savings accounts. These and more economies are going to be considered. In this election, it seems we have come to a turning point. A majority of Americans realize that the debt no longer can be kicked down the road. It must be faced.

The tea party's candidates must take their place in the conservative movement and continue to call for reform. They have allies, such as Rep. Paul Ryan and the conservatives' other "young guns," willing to work with them. This can be a historic election, but it is just the beginning. The deficit must be ended.