The Exhibitionist at the State Department 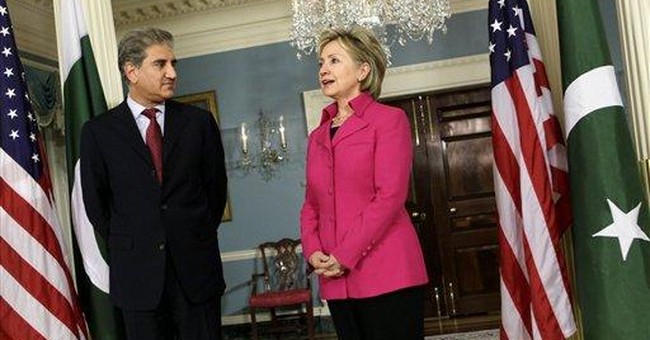 WASHINGTON -- I have been following Secretary of State Hillary Rodham Clinton's first foreign policy jaunt with my customary discernment in matters regarding the Clintons. Frankly, I am very uncomfortable with her title, secretary of state. She termed her Asian trip a "listening tour." Does that bring back memories? She met with foreign leaders, but she commanded more attention for meeting with "giggly" students on a campus and appearing on an Indonesian variety show called "Awesome." There she discoursed on the pop culture of teenagers but demurred when asked to sing. She mugged for the paparazzi, glad-handed crowds and explained her informality as "a way that is not traditional, not confined by the ministerial greeting and the staged handshake photo."

So after watching this trivialization of statecraft, I shall continue to think of the former senator from New York not as Secretary of State Clinton but as candidate Clinton. Not surprisingly, candidate Clinton has brought to the State Department the most politically seasoned staff ever. As she campaigned in Asia, she was accompanied by at least two of her longtime political operatives. One is Huma Abedin, from candidate Clinton's days on the Hill. Abedin carries the title "senior adviser." What she knows about foreign policy remains a mystery, but she knows the Clinton political operation. On this trip, according to The Washington Post, Abedin "silently will hand Clinton a glass of water when her voice rasps during a briefing." Another veteran Clintonista on the trip has been Kiki McLean, a former press aide to Bill Clinton in his days as governor.

There are more Clintonistas joining candidate Clinton at the State Department, which suggests there will be friction ahead between her political operatives and diplomats and foreign policy specialists, who are supposed to be untainted by politics. Candidate Clinton is bringing as her chief of staff Cheryl Mills, the Clinton loyalist who, as a White House lawyer in 1999, spoke ardently on the House floor against the Boy President's impeachment. Philippe Reines, press secretary for Hillary on the Hill, will play that role at State. The candidate also is bringing along Lissa Muscatine, her speechwriter from yesteryear, and scheduler Lona Valmoro. Even the Clintons' old aide Maggie Williams is working for Hillary, though perhaps not this week. Socks, the White House cat when the Clintons were in office, passed away this week. As was the case with the Clintons' famous dog, Buddy, the expiry took place while the Clintons were on the road. Doubtless, it is only a matter of time before the Clintons' loyal factotum Sidney Blumenthal moves into a State Department office and talk of conspiracies against the candidate begins. How about a "vast State Department conspiracy"?

Another reason it is difficult for me to take Hillary seriously as the nation's top diplomat is that she is bringing to this high Cabinet post the incongruous girlishness that she always brings to public life. There is nothing new about a female secretary of state. The post has been held by Madeleine Albright and Condoleezza Rice. Neither displayed a hint of girlishness. Neither continued Hillary's adolescent competition of the boys against the girls.

Throughout her public life, Hillary Clinton has proved to be a formidable figure, but that's not because of her intelligence and certainly not because of her high moral character. She has been propelled to the heights of public life because she is an exhibitionist. Many of our public figures are. There is very little in their lives that is too personal for them to publicize and to exploit in seeking attention. This is one of the reasons our public leaders are so mediocre. They are celebrities.