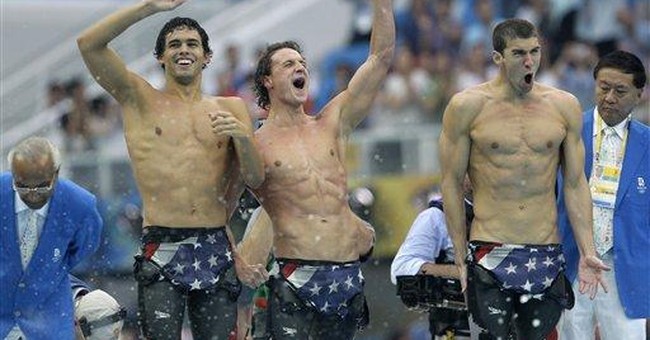 Trending
Co-written by Alan B. Somers

WASHINGTON -- After decades as ardent fans of Grand Prix racing and international swimming competition, we have come to the conclusion that in both, sports engineering has become more important than the competitors. In Grand Prix driving, it is not surprising that engineering has come to overshadow the talent and gallantry of the drivers. Auto races have involved technology since the first race car fired up. Today, however, the heroics of the drivers matter far less than their cars' technology. The unforeseen consequence has been that Grand Prix racing is boring. Could international swimming suffer the same dismal fate?

If you have followed this year's controversy over the use of high-tech swimsuits in the Olympics, you will get our drift. Michael Phelps might eclipse our fellow former Indiana University swimmer Mark Spitz's Olympic record of seven gold medals at a single Olympic Games (though he will have to break the world record in every event, as Mark did). However, even in these Olympics, attention is shifting ever so perceptibly from the greatness of the athletes to the details of their high-tech equipage and the collateral litigation of Speedo, Arena, Adidas and other swimsuit designers.

The companies are contending with each other for various rights and with athletes whom they have contracted to wear their equipment. If the controversies continue, Phelps and his fellow champions are going to be increasingly sharing the limelight with corporate lawyers, business executives and the brainy scientists employed by these companies to improve their products' "ultrasonically bonded seams," "polyurethane layers" and -- who knows -- possibly uranium-235. Sure, this year's Speedo high-tech suit (the LZR Racer) is fast, but give the scientists a few more years and it is eminently conceivable that the next generation of Speedo swimsuits will have gone nuclear.

The sobering fact is that of all sports, swimming is one that needs no high-tech gadgetry. Swimming involves training, stroke mechanics and the character of the athlete. That is what makes the sport so exciting and even noble. At some point, swim coaches and athletes alike are going to have to reclaim the sport from the techies, the fat lawyers and the corporate executives. If they fail, competitive swimming is likely to become a bore.

At the 1960s Olympics in Rome, one of us (that would be Somers) pooh-poohed that year's innovation, to wit, a full-body shave, undertaken to enhance a swimmer's time. The consequence was an Olympic record in the semifinals of the 400-meter freestyle (hurrah!) and defeat by the shaven conformists in the finals (alas!). But shaving one's body is a far cry from encasing it in someone else's skin -- for instance, Speedo's LZR, designed, it is reported, in conjunction with NASA scientists.

The suit costs $550. It takes 20 minutes to put on. It fits so tightly it is ripped easily. The surface of the suit is so abrasive that one risks tearing one's fingertips when putting it on. California has banned the suit for competitors 14 and younger. The whole world should, too, and not just for adolescents. Not only is this high-tech suit an absurdity to competitive swimming but also puts the sport out of reach for any but the well-financed competitor. It makes international swimming an entirely different event from the event that millions of athletes participate in worldwide for the good of their health and the thrill of competition. The suit admits into the Olympics not highly competitive swimming, but a grotesquery of swimming.

We are not alone in our criticism of this ill-conceived effort at technological innovation. Google the topic for yourself. You will see that many former swimmers and coaches have objected, as well as many spectators. Those of a humorous cast of mind suggest that today's Olympians compete as their Greek predecessors did: buck naked. We think this goes too far. We suggest simply outlawing any equipment that speeds up performance beyond what unadorned bodies might achieve in the water. That is: no swim fins, no propellers, no water jets affixed to any part of a swimmer's anatomy.

We want to see the sport of swimming continue as it has over the decades, improved by superior training, superior stroke mechanics and grit. As it stands right now, the achievements of Michael Phelps in this Olympiad might mark him as the greatest swimmer of all time, but with his performance enhanced by the adventitious element of high-tech swimsuits, doubts will linger in the minds of the skeptics. What if previous Olympic champions had been able to wear swim fins or spray themselves with Vaseline?