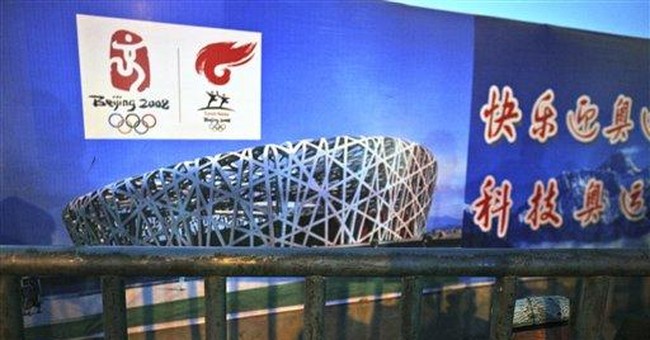 WASHINGTON -- I see that the Olympic Games are taking place again. Nonetheless, the boycott that I slapped on them a couple of decades back remains in effect. I shall not watch them voluntarily. Perhaps I shall be passing through a room where the games are being boomed and blathered, but I shall avert my gaze.

Admittedly, the games have suffered no setback since my boycott began. In fact, they seem to be tawdrier than ever. But my boycott finally has attracted the support of my old friend and former Olympian Alan Somers, who recently set a world record for the 3,000-meter swim for men 60 and older. Al was a teammate of mine on the Indiana University swimming team in the early 1960s, where many of our teammates were Olympians and world-record holders. When I slapped my boycott on the Olympics, he dissented. Worse, he chided me, attributing my boycott to sour grapes over never making the team.

Well, it is true that I never made an Olympic team, but I never won a Rhodes scholarship, either, and I never have been critical of Rhodes scholarships. Yet I accepted Al's rebuke with my usual benignity, confident that as the Olympics lurched ever further from the Olympic ideal of amateurism and good sportsmanship, Al would capitulate. It is immensely rewarding to have him on my side during this Olympiad. What is more, next week he will collaborate with me in this space; we shall deplore a particularly egregious excess in this year's swimming competition.

For now, Al, whose Olympics were in 1960 in Rome, is at work reviewing David Maraniss' confused book on those games, "Rome 1960: The Olympics That Changed the World." Among other deficiencies, Maraniss fails to report that the 1960 swimming competition was the first in which male swimmers shaved their body hair to improve their times. One of the great news stories of the games issued from one reactionary American's refusal to follow the fad. Al was the reactionary. He gained instantaneous worldwide recognition after propelling his shaggy body to an Olympic record in the trials for the 400-meter freestyle. How he did in the finals I shall leave for Al to explain. He still denies shaving has anything to do with performance and in fact wore a mustache when he broke the world record in the 3,000-meter swim.

What makes the Olympics in Beijing fouler than previous games is the behavior of the Chinese government. I can understand its concerns for security. I even can understand its attempts to dissuade political protests. (I said dissuade , not repress .) But now comes word that the Chinese government is going to oppose displays of faith before and after events. Not only that, but apparently, the Olympic charter is supporting the repression of religious gestures. Its charter prohibits displays of "political, religious or racial propaganda." No such boilerplate was to be found in the original Olympic charter.

One of the repellent aspects of the Olympics is the megalomania of the athletes, the coaches, even the fans. One of the saving moments is the occasional display of sportsmanship. An athlete graceful in victory or defeat is a noble sight. An athlete thanking his maker is equally moving. As our great quarter-miler Sanya Richards has said: "It's (her quick genuflection and prayer of gratitude) important because I want people to know that I'm not the best because I'm Sanya Richards. I'm the best because of God. I truly believe we can't will ourselves to win. I hope people see the same thing I see."

Actually, I have an answer for both groups of officials. Thanking God for victory after an event or asking his help before an event is not "propaganda," as mentioned in the revised Olympic charter. It is prayer. Where prayer is viewed unfavorably, no civilized person should want to be.