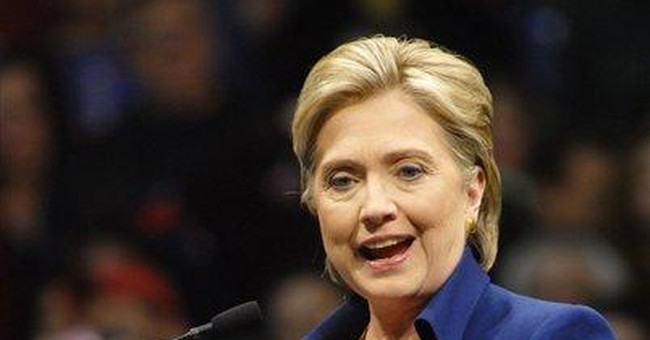 WASHINGTON -- There always has been something delusional about the Clintons' project to make Hillary this country's next commander in chief. Start with the balderdash so frequently exuded through the media that she is, along with her husband, a "rock star." Well, they left the White House like rock stars. They trashed the place.

Yet Hillary, a physically unprepossessing lady on the far side of middle age, is not a rock star. Agreed, when she and her bodyguards enter a room, she turns a lot of heads, but so does a roadside automobile accident or the clumsy waitress who just spilled a warm plate of fettuccine alfredo on a customer. Why have members of the press insisted on claiming that Hillary is a rock star and, more preposterous still, that she possesses "charisma," notwithstanding that she is a pedestrian campaigner with a tin ear for politics?

For that matter, why have members of the press insisted on claiming that the former Boy President is a political genius? The Democratic Party went into decline almost everywhere throughout the republic while he was bemanuring the White House. Truth be known, when Boy Clinton began campaigning for her, her prospects darkened. The stubborn minority of journalists who have remained undeluded by the Clinton legends and aware of the Clinton record recognized the impending danger. All through the spring and summer, I was asked on talk radio and television whether I thought Bill would be active in Hillary's campaign and, if so, whether he would be an asset. Usually, I expressed doubt on both counts. As I point out in my book about his retirement and his attendant designs to return to the White House, "The Clinton Crack-Up," Hillary's staff always has been uneasy about the presence of her big loveable lug on the campaign trail. Anyone who might bother to contemplate his record as a campaigner would recognize that he is poison when he campaigns for others. In 2004, of the 14 fated Democrats he campaigned for, 12 lost.

Delusional, too, are Hillary's boasts that her "experience" is superior to that of Sen. Barack Obama. Actually, the less said about Hillary's experience the better for her. Now, after this week's primary defeats, she is introducing her "experience" theme again by boasting that as president, she will be "ready from Day One." She capitalizes "Day One." Is she telling us that upon entering the White House, she will again fire the apolitical employees at the travel office? Or is she promising a "Filegate" hullabaloo with her opponents' FBI files turning up in White House offices? Will there be billing records appearing and disappearing? Will she preside, as she did in the early 1990s, over a "War Room" to handle Whitewater? Whitewater is old news, Hillary. Get over it!

For Hillary to stress her political experience is about as reckless as it was for the most recent Democratic presidential candidate to stress his war record, knowing that it included easily accessed film of his appearance before Congress denouncing the Vietnam War and blatantly lying about his comrades' combat behavior. Candidate Jean-Francois Kerry fallaciously charged his comrades with committing atrocities, and three decades later, he expected to be elected president. Regarding Hillary's experience, I suspect that the electorate is well-aware of its luridities. As I noted in "The Clinton Crack-Up," when her campaign for the presidency drew near, anywhere between 40 and 50 percent of the electorate were polled saying that they would not vote for her.

I noted those statistics to a mainstream journalist a few months back, and he thought I was exaggerating. All he had to do was consult the polls.

The explanation for Hillary's collapse as a front-runner with a 25 to 35 percent (chose your poll) lead over Sen. Barack Obama is that a small cloud far back in the memories of many Democrats has come forward in their minds with every one of her campaign's blunders. After the early bullying of Obama, the arrival of shady Asian money, the planted questions at an Obama rally, implausible complaints about Obama's kindergarten essay, the racist rhetoric in South Carolina, and now evidence of voting fraud in the New York primary, those little clouds have become thunderclouds. Hundreds of thousands of Democrats do not want to go back to the 1990s.

Perhaps historians will note what I noted not long ago. Obama began to cut into Hillary's lead in late November. That was when he deftly reminded voters of the "1990s" and of the quarrels of "the baby boomers." He wanted to move on, and that meant leaving the Clintons and their episodic apologists in the media forlorn among the vapors of their delusions.