Ellie Bufkin
|
Posted: Jul 24, 2020 11:30 AM
Share   Tweet
The opinions expressed by columnists are their own and do not necessarily represent the views of Townhall.com. 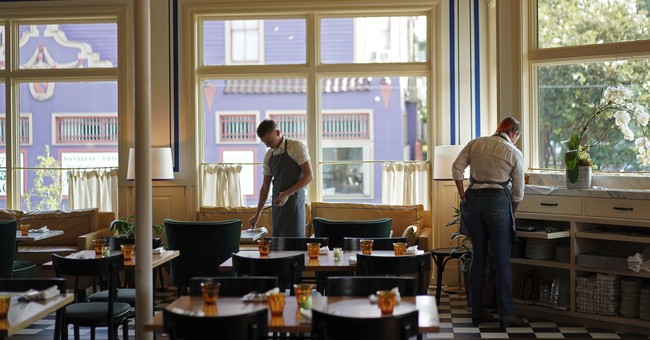 Before the Chinese coronavirus crisis dealt an economic death blow to the hospitality industry, New York City restaurants and employees were already facing an uphill climb to keep up with mounting regulations and bloated wage hikes.

In New York, progressives celebrated when Mayor de Blasio and Gov. Andrew Cuomo championed the demand to increase the state minimum wage to $15 per hour. The policy change, however, gutted restaurants whose staff was accustomed to earning a small hourly rate, plus tips.

Faced with impending wage requirements that meant a more than doubling of tipped wage from $7 per hour to $15 in a matter of just a few years, owners and managers scrambled for options. New York also mandated that businesses give employees other costly benefits like paid leave and 401k, things from which restaurants had previously been exempted. One celebrity restauranteur attempted to combine the interests of the progressive activists and his employees by innovating a new system that eliminated tipping altogether.

Danny Meyer, famous for landmark luxury Manhattan restaurants Union Square Cafe, Gramercy Tavern, The Modern and several others, constructed a financial plan in 2015 for his empire of restaurants that meant all staff would get that inflated minimum wage, but no longer receive tips. To make this work, Meyer increased the prices of food and beverage by approximately 20 percent, the amount customers customarily leave as gratuity.

The hike in menu prices, in theory, would mean that the restaurant would generate their normal revenue plus 20 percent, allowing them to pay the servers the minimum of $15 per hour and also increase the pay of cooks and dishwashers who were historically out-earned by their front-of-house, tip-earning counterparts.

I worked at one of Meyer's restaurants during the early years of this practice, at first as an hourly employee and then as manager. In practice, the plan was met with mixed reviews from patrons and staff. Servers and bartenders, accustomed to making significantly more from receiving tips, quickly had to adjust to a much more throttled earning potential. Despite the consistent claim that $15 is a "living wage" from leftists who have never worked in the hospitality industry, it is not. Tips had bolstered workers into an income bracket that allowed them to pay for New York City living. Without them, that life was much harder.

Hourly employees of Danny Meyer were compensated on a pay scale that judged the quality of worker performance in three tiers. The minimum pay of $15 per hour was padded with extra points from a vague point pool of money so highest earning staffers could earn the equivalent of about $800 per week during the fattest of times, a fraction of what NYC servers and bartenders once earned. Overtime was strictly forbidden.

Longer-tenured bartenders and servers quickly left the Danny Meyer empire, joining the ranks of restaurants still allowing their staff to earn tips. But that looming $15 wage requirement and benefits mandates, which were fully enacted last year, meant that all restaurants would soon be in trouble without rewriting the whole script.

As a manager, we learned quickly that the only way to stay within labor budget was to make aggressive cuts in both the kitchen and the front of house. That meant fewer people on the floor, fewer people cooking food, and far fewer hours to properly train staff. As you can imagine, this spelled out a rapid decline in service standards. As salaried employees whose pay never changed, our hours in the restaurant were staggering. I took many bleary eyed N trains home to Queens after 3:00 am.

Underlying issues aside, Meyer and every other New York restaurant was forced to close at the beginning of the COVID-19 pandemic. He was forced to lay off around 2,000 employees across the family of restaurants, keeping only a skeleton crew of executives earning a fraction of their normal salaries.

Now, he says, the only way to even fathom getting staff back to work and back to earning money is to bring back tipping. In his announcement this week, Meyer further acknowledged that five-year experiment in "no-tipping," a change he dubbed as, "Hospitality Included," had not ever worked the way he'd hoped.

"Over the course of nearly five years, Hospitality Included was able to make some strides in narrowing the wage gap, but it was never easy to make the math add up for all stakeholders, even in far more robust economic times," he wrote in a statement.

Meyer blamed the inequity between tip earners and the kitchen saying that tips weren't ever really the problem, the refusal of staff to share tips was the problem. Though many restaurants pool tips in the front of the house, a staff member must account for at least 80 percent of their job duties as interaction with customers in order to be part of the pool, according to New York law. Meyer has now vowed to fight that policy, as he continues his quest for woke pureness in the restaurant world.

But for New York City restaurants – and restaurants across the nation – to survive the economic hardship of this pandemic, many more changes will have to be made from a policy perspective and within the restaurants themselves. In New York, the staggering wage and benefits requirements sound great on paper but actively harm the businesses on which they are imposed.

More than 80,000 small businesses in New York City alone are expected to never reopen their doors after the pandemic has ended. What good is a high minimum wage and benefits if businesses can't afford to keep their doors open?

Despite critics' baseless claim that tipping can be discriminatory and puts women at risk, the reality is that tipping is the great equalizer. Dreamers who want a slice of city life without first putting themselves through the financial tornado of college debt have long turned to tipping jobs as a way to earn more than enough to live on. Freedom to earn is an American right and one that progressive bureaucrats consistently fail to understand.

If any restaurant in NYC survives the pandemic, it will be because they and their workers are given the freedom to earn as much as possible without suffocating regulations from Rochester and a virtue-signaling City Council. The end result for businesses and workers who cannot survive on their own steam is only socialist decay. Government must give businesses and workers the tools and room they need to make it on their own.