Hillary Lies Even When She Doesn’t Have To

Ed Klein
|
Posted: Aug 24, 2016 12:01 AM
Share   Tweet
The opinions expressed by columnists are their own and do not necessarily represent the views of Townhall.com. 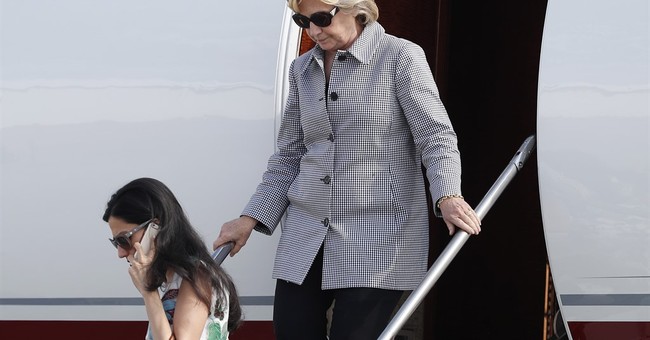 Hillary Clinton has been caught lying again—and this time it’s serious, because she lied to the FBI, which is a federal crime punishable by a fine and/or imprisonment.

During her 3 ½-hour interview with the FBI on July 2, she told investigators that former Secretary of State Colin Powell had advised her to use a personal email account during a private dinner.

“The truth is she was using [her personal email] for a year before I sent her a memo telling her what I did [when I was in office],” he told the New York Post’s Page Six. “Her people have been trying to pin it on me.”

Asked why Clinton’s team was attempting to blame him, he responded, “Why do you think?”

It will come as no surprise to those who have read my books that Hillary is a liar.

Of course, I was not the first person to make that discovery.

Carl Bernstein , in his biography of Hillary, A Woman in Charge, noted that she indulged in “subterfuge and eliding.”

David Geffen, the Hollywood mogul, famously said, “Everyone in politics lies, but [the Clintons] do it with such ease, it’s troubling.”

Ed Klein is the author of 'Guilty as Sin: : Uncovering New Evidence of Corruption and How Hillary Clinton and the Democrats Derailed the FBI Investigation' from Regnery Publishing.

FBI's Mar-a-Lago Ransacking Takes Another Irresponsible Turn
Townhall
'The Atlantic is bad.' RedSteeze takes The Atlantic APART for a plethora of crap articles (attacking the Rosary?) in BRUTAL thread
Twitchy
Footage of John Fetterman Reveals a Man Who Is Not Alright
Redstate
The Morning Briefing: Biden's Revenge-Fest Isn't Going to Work Out Well for the Dems
PJ Media