Ed Feulner
|
Posted: May 24, 2019 10:26 AM
Share   Tweet
The opinions expressed by columnists are their own and do not necessarily represent the views of Townhall.com. 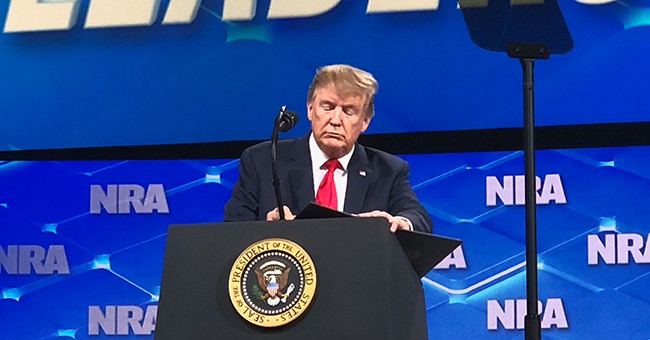 Some of the most notable policy victories take time — and they seldom generate banner headlines.

Take the Arms Trade Treaty. There’s an excellent chance that you’re saying, “The what?” There was a relatively minor ripple in the news cycle when President Trump announced he was withdrawing the United States from it.

But believe me, it matters. And it was the right move.

The Arms Trade Treaty probably sounded harmless enough to most people when the United Nations first voted on it about a decade ago. Its goal: “establishing common international standards for the import, export and transfer of conventional arms.” What could go wrong?

Plenty. And The Heritage Foundation’s Ted Bromund, who has monitored the ATT from the start, wasted no time in sounding the alarm bells.

“Although putatively intended as [a] measure that would reduce conflicts and limit the ability of terrorists and organized crime to obtain weapons, the treaty contemplated by the resolution would in reality be a license to almost all states, no matter how irresponsible, to buy and sell arms,” he wrote in a 2009 report.

“The projected treaty would endanger U.S. arms export control policy, clash with the Constitution, offer a dangerous justification for dictatorial rule, and make it illegal under international law for the U.S. to support freedom fighters abroad.”

Unfortunately, it often takes more than one report — no matter how well-reasoned — to stop a bad idea in its tracks. So Bromund kept at it.

Along the way, he published more than 200 related reports, op-eds, scholarly articles, lectures and blog posts on the ATT. He also gave countless media interviews.

On the other side, in full support of the treaty, was a large coalition of gun-control proponents, and left-wing, non-governmental organizations. They campaigned hard, and found a sympathetic ear in the Obama White House. In 2013, Secretary of State John Kerry signed the ATT.

The Senate, however, never ratified the treaty. And now, with President Trump’s announcement, it’s off the table.

So what’s wrong with the ATT? For one thing, as the White House pointed out, it provides “a platform for those who would seek to constrain our ability to sell arms to our allies and partners.” That’s a key goal of the ATT’s supporters: tying the hands of the U.S. (which, unlike many other signatories to treaties, actually honors its commitments).

Another problem: The ATT has “a track record of … being used by groups to try and overturn sovereign national decisions on arms exports,” the White House says. No one who cares about national sovereignty should consent to such an agreement. Just ask the British, who have been sued repeatedly by the activists in the name of the treaty.

Then there’s the matter of the Second Amendment. Oh, the treaty’s supporters assure us that the ATT won’t affect our right to own guns. But as Bromund points out, they also refuse to make that clear in the treaty text. So sure, the treaty (at least as now written) is no gun grab. But gun-control activists could still use it to advance their goals.

And let’s not forget a major flaw in the ATT, at least if we’re to take it seriously: China and Russia, both of whom are major arms exporters, aren’t party of the treaty.

So President Trump was right to say he was un-signing the ATT. But we shouldn’t stop there. The treaty still has 102 state parties around the world, so the U.S. should follow up by pulling all U.S. funding from the treaty.

Plus, notes Bromund, there are other bad treaties out there like the ATT. It’s time to quit them as well — and work to ensure we never get to this point again.