Ed Feulner
|
Posted: Jan 10, 2019 12:01 AM
Share   Tweet
The opinions expressed by columnists are their own and do not necessarily represent the views of Townhall.com. 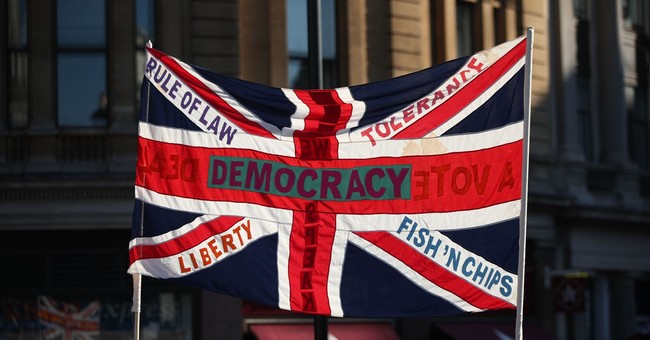 In an ideal world, America’s break with King George III’s Britain would have been a clean, simple affair. We’d have announced our intention to leave, been told to suit ourselves and there’s the door, and bang – it would’ve been done.

But the king had other ideas. We prevailed, but it took a protracted war to do it.

Fast forward to today, and one can’t help noticing certain parallels to Britain’s situation with the European Union.

In June 2016, frustrated by the invasive hand of bureaucratic meddling from Brussels, British citizens voted to exit the EU (aka Brexit). No one could reasonably expect the EU to take the news well, but still – this break, too, should have been a clean, simple affair.

No such luck. Instead, aided and abetted by those in Britain who opposed Brexit, the EU has done everything it can to drag out their departure and make it as painful as possible.

The purpose is not so much to make Britain reconsider (though the EU naturally hopes that Britain’s sojourn of self-determination can indeed be a short one). It’s to warn other nations who might be tempted to imitate Britain that the price will be high. In short, they want to make an example out of the upstarts.

So did British Prime Minister Theresa May’s team of London’s career bureaucrats push back, as they should have? No, they made a conciliatory deal with Brussels. The pro-Brexit members of her Conservative Party were understandably outraged.

What’s to be done about this particular problem?

In a long conversation I had in London over the Christmas holiday, Professor Deepak Lal of UCLA, one of the world’s leading economists, explained why the UK should adopt a “tit for tat” strategy. Essentially, Britain needs to leverage its strengths to get what it wants.

“Mrs. May should announce in January that the UK will leave the EU customs union and single market as well as the jurisdiction of the European Court of Justice on March 29,” Lal writes in a recent column. “But, to facilitate the negotiation of a free-trade arrangement with the EU, the UK will provide duty-free access to imports from the EU for a limited period.

“If the EU reciprocates with similar duty-free access for British exports for the period it takes to complete a legal [free-trade agreement], there would be no change in the import/export trading status quo after March 29. There would be no need for lorry parks, stocking of food and medicines, or disturbance of supply chains.”

Lal goes on to give other examples, but you get the idea. Britain doesn’t have to kowtow to demands from Brussels. It can and should negotiate for the best deal possible.

Another substantial benefit of doing so is that it can help facilitate a highly anticipated bilateral trade deal between the U.S. and Britain. Woody Johnson, U.S. ambassador to Britain and a staunch Brexit supporter, has been highly critical of the May agreement, which President Trump calls “a great deal for the EU.”

It’s time for May and other politicians in London to ignore the fear-mongering coming from Brexit’s most implacable foes. “The architects of Project Fear would have us believe that a hard Brexit would leave Britain isolated, doomed to a lonely decline,” Nile Gardiner, a former aide to Margaret Thatcher, writes in the Daily Telegraph.

The reality will be a prosperous nation – one that can negotiate trade deals with anyone it pleases without getting permission from its EU overlords.

“A sovereign Britain that can trade freely across the world, and stand shoulder to shoulder with the US, can only be delivered by a clean break with Brussels in March,” Gardiner adds.

That can’t happen if they’re willing to give away the store. It’s time to adopt Lal’s tit-for-tat strategy – and pursue a no-deal Brexit.