Ed Feulner
|
Posted: Jan 04, 2019 12:01 AM
Share   Tweet
The opinions expressed by columnists are their own and do not necessarily represent the views of Townhall.com. 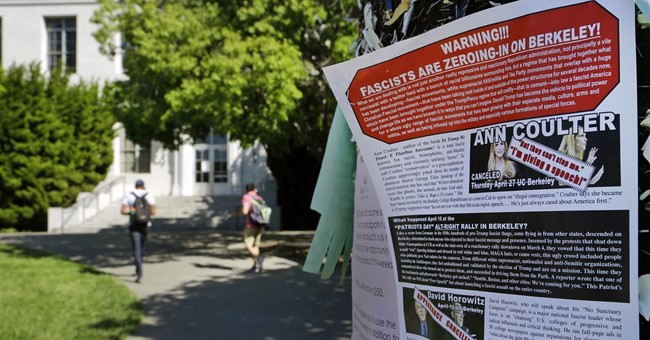 Conservatives at the University of California at Berkeley got an early Christmas gift this year: a victory for free speech.

It’s been a rocky road lately for the First Amendment on campus, at least for those who don’t hold to the usual liberal orthodoxy. Invite a controversial speaker, as certain student groups have done, and you’re courting trouble.

For one thing, your event may not even happen. Spooked by the threats of those who oppose your speaker, nervous school officials may force you to rescind your invitation. Those who manage to appear, however, will likely be harassed so fiercely that they’ll hardly get a chance to speak — which, of course, is the point.

The media calls those who target such speakers “protestors.” What a joke.

As I’ve noted before, protesting has a long and hallowed history in America. If a controversial speaker comes to a campus, and people who disagree with his message want to speak up, fine. Hoist your signs, distribute your literature, etc.

But do it outside the event. Don’t fill the seats and scream at people, or block entrances, or pepper-spray individuals, as has occurred on certain campuses.

That’s the sort of reception that Milo Yiannopoulos got when he arrived to speak at Berkeley on Feb. 1, 2017. As former vice president of Berkeley College Republicans Naweed Tahmas pointed out in an article for the San Francisco Chronicle, “An army of masked Antifa agitators besieged Berkeley, attacking bystanders and causing more than $100,000 worth of property damage — all to prevent a one-hour lecture.”

But there are other ways to stifle speech, as Berkeley alumnus David Horowitz discovered when he was invited to campus to speak. University officials imposed a $6,000 security fee on event organizers, along with restrictions in their unwritten “high-profile speaker policy.” Three guesses how many liberal speakers were treated the same way! The “heckler’s veto” worked — Berkeley Campus Republicans cancelled the Horowitz event.

When it came to Ann Coulter, though, it was Berkeley officials who cancelled over “security concerns.” Campus conservatives were now 0-for-3 last year.

“After attempts at hosting three conservative speaker events,” write Tahmas, “it became clear to me that there were two sets of rules at Berkeley — one for liberal students and one for conservatives — and that the only way to remedy this injustice was to file a lawsuit.”

Even as the lawsuit was pending, Tahmas tried again. This time his group invited Ben Shapiro, and it looked as if the pattern was going to repeat itself. This time, however, when university officials pushed against the Shapiro event, there was (finally) enough of a public outcry to ensure a different result, and the event was held after all.

Even better, though, was the victory I mentioned at the outset. Earlier this month, Berkeley and the campus conservatives reached a settlement. The school will no longer require randomly assessed security fees. All students can host events for free in classrooms and in student-government-owned venues.

It’s a shame that legal action was necessary to affirm the fact that, yes, the First Amendment still applies, and not just to speakers who spout politically correct points of view. But this illustrates the wisdom of the Founders in creating a Bill of Rights in the first place. Spelling out our inalienable, God-given rights is one of the best things they ever did.

As James Madison once said, “Our First Amendment freedoms give us the right to think what we like and say what we please. And if we the people are to govern ourselves, we must have these rights, even if they are misused by a minority.”

So when we consider what we’re grateful for this Christmas, let’s remember our freedoms. They’re not here by magic, but because good people fight to defend them. Let’s add our voice to their ranks — in 2019 and beyond.