Meeting the Caravan with Common Sense

Ed Feulner
|
Posted: Nov 02, 2018 12:01 AM
Share   Tweet
The opinions expressed by columnists are their own and do not necessarily represent the views of Townhall.com. 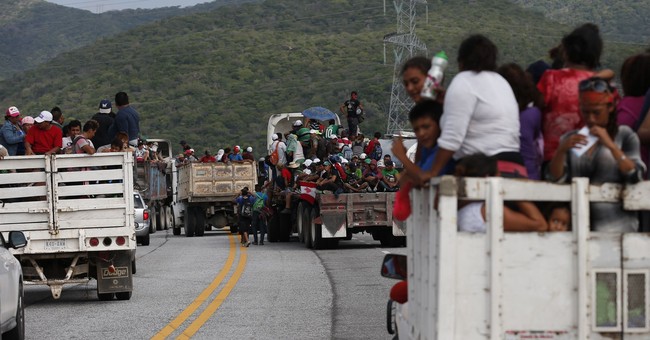 It’s sad to see the debate over the migrant caravan break down into the usual polarized camps. You’re either pro-immigrant and therefore willing to let anyone in, or you’re anti-immigrant and you want to slam the door in the face of anyone, right?

Wrong. The phrase “My fellow immigrants” certainly rings true for me, as it does for countless other Americans. In the 1870s, my forebears came to the land of opportunity, worked their way westward to Chicago, and lived their dream.

Today, there are more listings for “Feulner” in the Chicago phone book than in southern Germany, where my ancestors came from. (Although a quick computer search tells me that Markus Feulner is a star footballer for the Augsburg team. Clearly, “Cousin Markus” didn’t get his football genes from me!)

This isn’t a question about being unwilling to welcome newcomers. It’s about how we do it. For my ancestors -- on both sides of our family -- and millions of others, there was only one way to enter America: legally.

A sovereign nation is defined by specific territorial limits. Limits are borders, and borders must be real — that is, secure. A country without borders, sooner or later, will cease to be a country altogether.

That’s why there are processes and procedures for those who wish to enter our great land, either to visit or to become a citizen. We don’t just leave the door propped up.

In the words of a former U.S. president, “We simply cannot allow people to pour into the United States undetected, undocumented, unchecked and circumventing the line of people who are waiting patiently, diligently, and lawfully to become immigrants into this country.”

Hmm, you may be wondering, what hard-core conservative said that? Barack Obama. Surprised? The difference is that he said it when he was a senator, back when he and his fellow liberals were a bit more willing to speak truthfully about this subject.

Fast forward to 2018, and many of the same people who echoed President Obama’s sentiment happily denounce anyone unwilling to throw the border open to the 7,000-plus migrant caravan wending its way north through Mexico.

Consider what Marc McGovern, mayor of Cambridge, Mass., says: “Every one of these people are coming from a real fear. These are refugees. These are people who really are facing real problems, and we have to let them through.”

Some people may find themselves swayed by this emotional appeal, but it’s dangerous. Our national has specific laws in place when it comes to asylum – laws that are typically reserved for instances of state-based repression.

Is that the case here? Maybe, but the point is that we have procedures in place to carefully determine such things. We don’t simply say, “Aww, those poor people. Just let them in.”

McGovern and others can say what they want, content to score political points because they’re publicly opposing President Trump. But immigration officials can’t worry about being fashionable, or politically correct. They’re required by law to put the safety of Americans first.

The irony is, Trump’s critics don’t even seem to consider that South American left-wing parties may be manipulating the poor people in this migrant caravan.

“The timing before the U.S.’s midterm elections and the change of presidency in Mexico is not coincidental,” Latin America expert Ana Quintana says. “It is also clear the caravan organizers are more interested in creating turmoil than the well-being of the migrants.”

Those of us who care about both Americans and would-be Americans are called to a higher standard.

We should never fail to welcome those who wish to enter legally and become true Americans. But we must never allow our compassion to override our common sense, or let us forget that we’re a nation of laws – for the liberty and protection of all.