Ed Feulner
|
Posted: Sep 13, 2017 12:01 AM
Share   Tweet
The opinions expressed by columnists are their own and do not necessarily represent the views of Townhall.com. 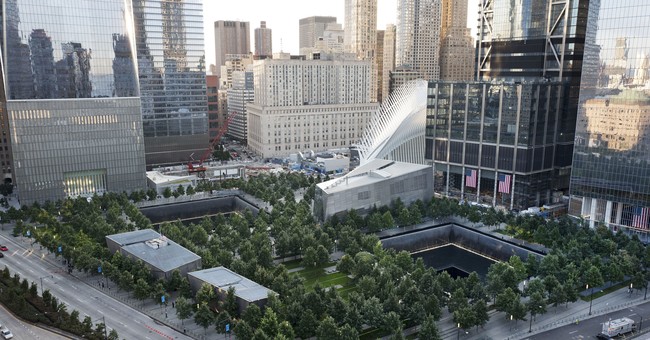 How appropriate that this year’s 9/11 anniversary should occur as Hurricane Irma continued to wreak havoc in Florida.

As President Trump noted in his address commemorating that dark day 16 years ago: “When Americans are in need, Americans pull together -- and we are one country. And when we face hardship, we emerge closer, stronger, and more determined than ever.”

We may fight like cats and dogs at times, and engage in debates so venomous that it seems like civility is completely extinct. But when the chips are really down -- be it the result of a terrorist attack, or an attack from Mother Nature -- we put our differences aside and help each other out.

We also do everything we can to prevent future attacks. In the case of hurricanes, alas, there’s only so much we can do. But when it comes to terrorism, we have more options. We can take the fight to the enemy. Our troops, our intelligence operatives, and all who work to ensure that we never have to suffer another 9/11 can cooperate and make us safer.

And it’s been working. There have been 97 U.S. terrorist plots since 9/11. But consider how the numbers are trending.

“With the decline of ISIS in Syria and Iraq, the number of terrorist plots in the U.S. have fallen substantially,” terrorism expert David Inserra writes in a recent article. “In 2015, the U.S. faced 17 Islamist plots and attacks; in 2016, 13. So far in 2017, the U.S. has faced only three.”

If you’re like most Americans, the fact that there’s been even that many may surprise you. Unfortunately, news of foiled attacks rarely breaks through the online clutter, with its often myopic focus on one or two “big” stories of the day.

Think, for example, how much we’ve all heard about the fights over Confederate memorials and statues. Now contrast that with how much you’ve heard about Lionel Williams. If you’re like many Americans, you’re probably saying, “Lionel who?”

The FBI certainly knows who he is. Agents arrested Williams last December. Ever since the previous March, they had been watching him, after one of his former associates tipped them off about how Williams was posting ISIS material on his Facebook page. He had also purchased an AK-47-style rifle the day after the December 2015 terrorist attack in San Bernardino, Calif.

That wasn’t all. In addition to practicing with the rifle near his home, Williams was attempting to send money to ISIS to help fund other attacks. According to Inserra:

“While he was funding ISIS, Williams continued to discuss a “martyrdom operation,” or attacks at home that would result in his death. He believed that unless he had something to live for, his attack might not be pure, and his death would be considered a suicide, rather than martyrdom.

“To solve that problem, he arranged a marriage to a woman outside the U.S., which led him to conclude that after he married her, ‘the next time I see her will be in [heaven].’ He went on to say he was planning to send the rest of his money to ISIS so that he would die without a dollar to his name.”

Fortunately, thanks to the good work of the FBI and others, his attack never materialized. In August, Williams pleaded guilty in federal court to attempting to provide material support for ISIS, a designated foreign terrorist group. He’s due to be sentenced in December, when he could get up to 20 years in prison.

Cases like this underscore the need to remain vigilant. It’s all too easy, as the anniversaries roll by, to become complacent. The only way to prevent another attack, whether large or small, is to stay on our guard -- always.