Welfare Reform: What (and Who) Works

Ed Feulner
|
Posted: Aug 17, 2016 12:01 AM
Share   Tweet
The opinions expressed by columnists are their own and do not necessarily represent the views of Townhall.com. 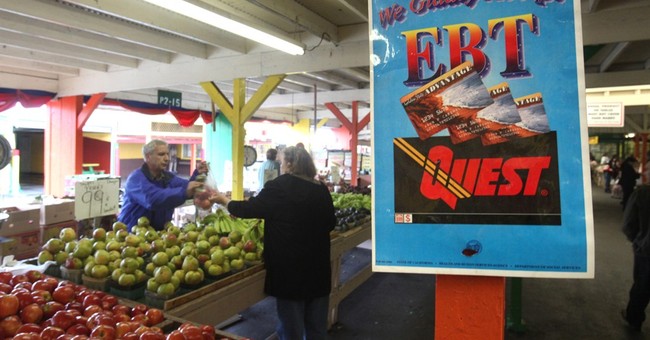 If anyone ever wonders why conservatives are skeptical of government programs, they should consider the War on Poverty. There are other examples, of course, but public welfare is a particularly apt one as we mark the 20th anniversary of the 1996 reform.

Why? Consider what President Lyndon Johnson said when he launched the War on Poverty -- that it would strike “at the causes, not just the consequences of poverty.” He added, “Our aim is not only to relieve the symptom of poverty, but to cure it and, above all, to prevent it.”

A noble goal, to be sure. Unfortunately, Johnson’s war has never come close to finding a “cure.” We’ve spent more than $24 trillion -- $24,000,000,000,000.00! -- over the past five decades, and what do we have to show for it? No improvement in self-support. Indeed, when one considers the key role that marriage plays in reducing poverty, things have gotten worse.

How bad is it? Here are a few startling facts, courtesy of The Heritage Foundation’s “Solutions 2016” report:

Today, the U.S. spends 16 times as much on welfare as we spent in the 1960s -- about four times the amount needed to pull every poor family out of poverty -- yet people are less capable than ever of supporting themselves.

Total spending at all levels of government on the roughly 80 federal means-tested welfare programs, which provide cash, food, housing, medical care, and social services to poor and lower-income Americans, is over $1 trillion annually.

Welfare is the fastest growing part of government spending. Between 1989 and fiscal year 2008, means-tested welfare spending increased by 292 percent. That’s up three times in just 17 years!

In 1964, only 7 percent of births in America were outside marriage. Today, this number has climbed to more than 40 percent. Children in single-parent homes are more than five times as likely to be poor compared to their peers in married-parent homes.

Small wonder that President Reagan once said, “We declared war on poverty, and poverty won.”

But it doesn’t have to. We should build on the reform enacted 20 years ago this month. The ’96 legislation succeeded because it set federal work standards that required able-bodied welfare recipients to work, prepare for work, or look for work as a condition for receiving aid.

Prior to this, “welfare was a one-way handout,” writes poverty expert Robert Rector. “Government mailed checks to recipients who did nothing in return. Reform changed that.” The new work requirements were “based on fairness and reciprocal responsibility: Taxpayers continued to provide aid, but beneficiaries were required to engage in constructive behavior to increase self-sufficiency and reduce dependence.”

It worked. After the ’96 reform, the caseload for Aid to Families with Dependent Children (or AFDC, which was replaced by TANF, or Temporary Assistance to Needy Families) dropped by 50 percent. Employment and earnings rose. Things were finally moving in the direction of President Johnson’s goal.

Unfortunately, the ’96 reform, though successful, was limited to only one welfare program. The federal government runs more than 80 such means-tested programs. Worse, the work requirements of the ’96 reform have been weakened over the last few years, erasing some of the gains that were made.

We need more requirements, not fewer. Look at the food stamp program, one of the largest and fastest growing of the government welfare programs. We should require able-bodied adult recipients to work, prepare for work, or look for work as a condition of receiving food stamps. And there’s no reason we can’t apply that same condition to other programs.

Welfare should be available to those who truly need it. But it shouldn’t be a handout in perpetuity to those who are able to work and make no effort to do so.

Fifty years after the War on Poverty was launched, and 20 years after welfare reform, we know the “cure.” Let’s starting applying it -- generously.