Turning Up the Heat on “Climate-Change Deniers”

Ed Feulner
|
Posted: May 10, 2016 12:01 AM
Share   Tweet
The opinions expressed by columnists are their own and do not necessarily represent the views of Townhall.com. 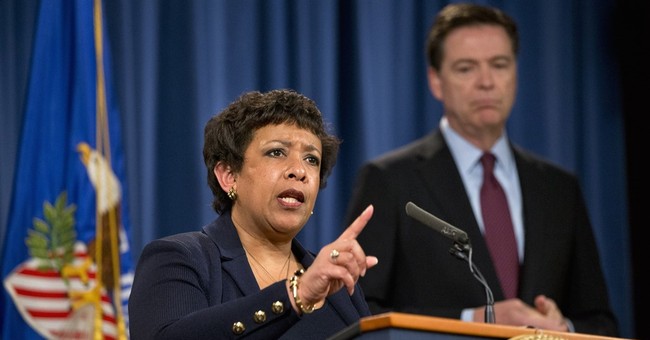 I’m not referring simply to the fact that it’s politically incorrect to question assertions of man-made global warming. That’s bad enough, but no -- I mean that if some powerful individuals get their way, it could soon be a federal crime to do so.

“The bottom line is simple,” New York Attorney General Eric Schneiderman said at a recent press conference. “Climate change is real.” He was joined by more than a dozen other state attorneys general who vowed to investigate -- and quite possibly prosecute -- individuals and organizations that criticize the conventional wisdom on climate change.

Their crusade has captured the sympathy of U.S. Attorney General Loretta Lynch, who on March 9 told the Senate Judiciary Committee that she has discussed internally the possibility of pursuing civil actions against “climate change deniers.” Worse, she has “referred it to the FBI to consider whether or not it meets the criteria for which we could take action.”

That struck committee member Sen. Sheldon Whitehouse (D-R.I.) as a great idea. After all, he had urged Lynch to prosecute those who “pretend that the science of carbon emissions’ dangers is unsettled.” He particularly wants to go after those in the “fossil fuel industry” who allegedly have a “climate denial apparatus” in place to say something Sen. Whitehouse disagrees with.

The fact that this flies in the face of the First Amendment seems so crushingly obvious that I can’t believe it needs to be said. But when you have public officials talking about using the federal government to punish those who dissent from their viewpoint, it is actually necessary to say it.

And that’s what we’re talking about here: a viewpoint. “They want to investigate and prosecute corporations and individuals for their opinions on an unproven scientific theory, for which there is not a consensus, despite inaccurate claims to the contrary,” writes legal expert Hans von Spakovsky.

There is, in fact, more diversity of opinion than one would expect among meteorologists and scientists on climate change and what’s causing it. We’re constantly being told “the science is settled” -- that the scientific community is marching in lockstep behind Al Gore’s pet theories. But polls show that they’re split on the issue.

Many scientists and climate experts, yes, say that climate change is real and that human activity is causing it. Some say it’s a mixture of human activity and natural causes. Others say not enough is known to say for sure.

Perhaps this is why Lynch and the state attorneys general are contemplating federal intervention. On survey after survey, the public puts global warming low on the list of important issues. Perhaps a little extra-legal muscle from the feds will make the organizations that question climate change fall into line?

Von Spakovsky sees hints in this “of the old Soviet Union, where Joseph Stalin persecuted those whom he thought had the “wrong” scientific views on everything from linguistics to physics. Both Lynch and Whitehouse might want to read Aleksandr Solzhenitsyn’s book, ‘In the First Circle,’ in which he outlined the Soviet government’s suppression of dissenting scientists and engineers.”

Perhaps someone can remind Secretary Lynch that we have free speech protections for a reason. They are designed not to protect the liberty of those who express the politically popular point of view, but to protect those who dare to say something contrary to it.

As President Truman once said, “In a free country, we punish men for the crimes they commit, but never for the opinions they have.” The question is, are we still in a free country?