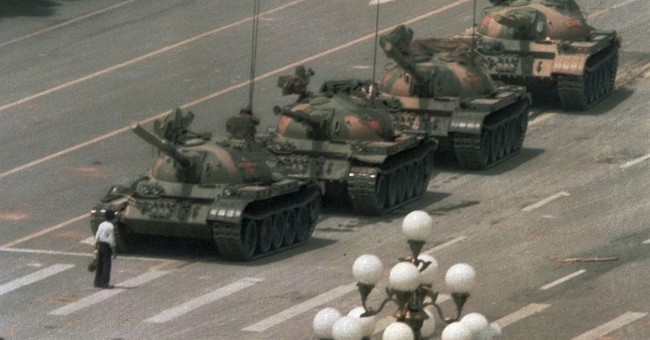 It’s one of the most iconic images of the 20th century: a man standing perfectly still, facing a large tank as it bears down on him. He’s unarmed and alone. Defenseless … except for an unshakable conviction that freedom is so important, it’s worth risking your life.

Which is just what that man was doing when in June 1989, he joined thousands of other fellow citizens in China for what became known as the Tiananmen Square Massacre. The tank, which was moving down Beijing’s Chang’an Boulevard and could have plowed over him easily, stopped directly in front of him. He stood his ground.

The tank turned right to try and maneuver around him. He immediately stepped to his left and continued to block its path. The tank went left; he moved right back in front of it. Right again, then left. It was no use. His message was plain: You want to move? You want to continue to oppress us? You’ll have to do it, quite literally, over my dead body.

How many of us would have had the courage to stand there in the face of what seemed like certain death? How far would we have to be pushed before we said, “Enough”?

The people of China had certainly been pushed quite a bit by that point. The scene described above was the climax of a series of events that began almost two months earlier when former Communist Party General Secretary Hu Yaobang died of a heart attack.

Yaobang had supported reforms that helped bring economic opportunity and some political reforms to China. But hardline Party members forced him from office because he appeared to tolerate student protests that pushed for further freedoms. Now he was truly gone, and many people throughout China were in mourning.

Wang Dan, the main student leader of the Tiananmen Square protests, was among those who encouraged tens of thousands of students, workers and civilians to fill the streets of Beijing in the wake of Yaobang’s death. On May 13, they began a hunger strike.

“After the hunger strike, the student movement transformed into a country of political protest with a lot of other groups like workers and especially intellectuals,” Wang reflected 20 years later. “That made our government very scared.”

Matters came to a head on June 3, when armed troops and the government’s tanks rolled in and cleared the protestors from Tiananmen Square. Bloodshed followed the next day. Hundreds had been killed by the time the lone protestor some later dubbed “Tank Man” made his unforgettable stand.

Unforgettable, that is, as long as we strive to keep the memory of it alive.

That’s why, for example, the Victims of Communism Memorial Foundation will mark the 25th anniversary of the Tiananmen Square Massacre on June 11 with a wreath-laying ceremony attended by foreign ambassadors, Chinese dissident leaders, members of Congress and other Washington dignitaries.

The memorial statue for the VOCMF, in fact, is the “Goddess of Democracy,” a bronze replica of the statue erected by Chinese students in Tiananmen Square in the spring of 1989. Many world leaders have visited the memorial site in Washington, D.C., to pay their respects and lay commemorative wreaths.

“We never thought a student movement could ever become so big,” Wang said. But should we be surprised? History shows that the human desire for freedom can move mountains. It can embarrass a government. It can even stop a tank.