Spare Us Another "Stimulus" 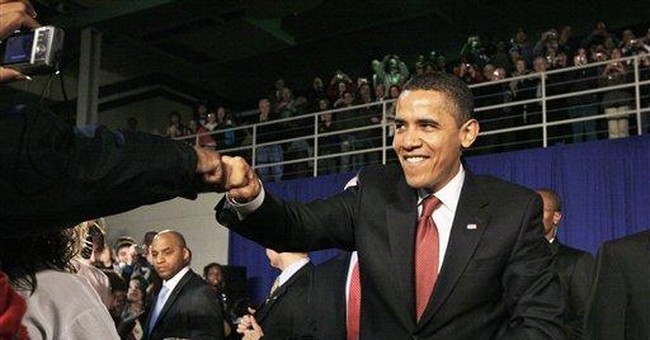 Businesses must spend money to make money. It’s expensive to invent, test and develop new products, and it can take years before they pay off.

Washington, D.C. spends money to hire people to enforce laws and regulations. Years, even decades later, those federal employees will still be toiling away on Uncle Sam’s dime (that is, yours and mine as taxpayers), even if the problem they were hired to address has ceased to exist.

That’s a harsh -- and expensive -- reality, one that seems to escape President Obama, who promises, in effect, to save money by spending money.

“We have had to spend our way out of this recession in the near term,” Obama said recently. He also claimed his administration has “begun to make the hard choices necessary to get our country on a more stable fiscal footing in the long term.”

That’s, well, rich, coming from an administration that fully supports budget-busting health care “reform” and climate change cap-and-trade bills. Taken together, these two measures -- both of which have passed the House of Representatives and are pending in the Senate -- would cost taxpayers trillions. Nobody in Washington talks about mere billions anymore.

If the administration aims to get people back to work, it must realize that government intervention is the problem, not the solution. A sensible first step would be to cut federal spending.

Yes, Obama correctly notes that he inherited a $1.2 trillion budget deficit when he came into office. So why make that worse? His administration has proposed budgets that would add $13 trillion (there’s that word again) to the national debt over the next decade. That’s hardly sensible budget stewardship.

“My economic team has been considering a full range of additional ideas to help accelerate the pace of private sector hiring,” the president added. But the simplest and best idea is right in front of us: slash tax rates to give companies a reason to invest in new jobs.

This doesn’t involve gimmicks such as a tax credit for hiring new workers. It does involve things like eliminating the death tax. That’s something the Senate can do by doing nothing. The death tax is set to go to zero on Jan. 1.

The U.S. now has the second highest combined federal and state corporate tax rates in the developed world. And since “the more you tax something the less of it you get” (take smoking, for example), it’s little wonder our economy remains in the doldrums.

The president also vowed to support proposals to blanket the financial sector with even more regulation – and create a new “Consumer Financial Protection Agency” to oversee it all.

But our economy is already overregulated. A new bureaucracy would raise costs for consumers, reduce the number and type of loans and financial services available, and further add to the confusion caused by conflicting consumer laws imposed by the states. Instead, lawmakers should look into repealing Sarbanes-Oxley, a regulatory bill passed in haste seven years ago to address a problem the market had already dealt with.

The Securities and Exchange Commission admits it costs the average company more than $2.3 million per year to comply with the law. That’s much more than the $91,000 cost the agency projected when the bill passed. Meanwhile, “Sarbox” has virtually wiped out the once-prosperous initial public offering market in this country. Companies looking to “go public” now list in London and Hong Kong instead.

Obama’s first “stimulus” proved again that government spending actually costs more jobs than it creates. Instead of spending even more, our country should pursue more affordable -- and effective -- ways to encourage growth. We simply can’t spend our way to prosperity.