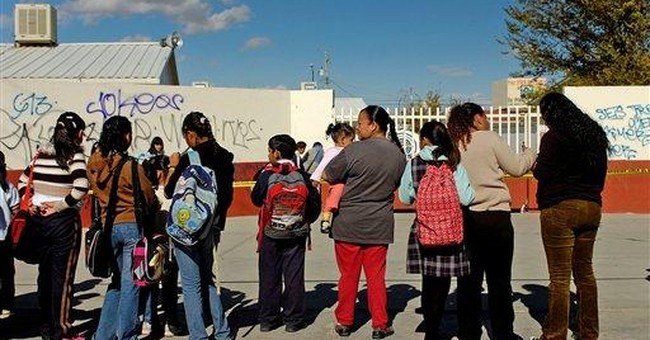 The decision comes as no surprise. That elite private school launched former first daughter Chelsea Clinton on the path to success years ago. And the Obama girls are certainly used to attending a private school.

Yet as president, Obama will have some promises to keep. Not only to his daughters, but to all Americans. During his campaign, he vowed, “We cannot be satisfied until every child in America -- I mean every child -- has the same chance for a good education that we want for our own children.” And the best way to give students that chance is to give their parents a choice.

If parents were allowed to pick their children’s school (as the Obamas have now done twice), they’d pick the best available school, not merely the one that happens to be in their neighborhood.

Obama’s decision should serve as a teaching moment for his administration’s education policymakers. Lesson number one would be that spending doesn’t equate to success.

D.C. spends some $14,000 annually on each child in its public schools. A lot of that funding comes from the federal treasury, which means all American taxpayers are subsidizing the D.C. public schools. That’s one of the highest per-pupil costs in the nation. Yet if the District were a state, it would rank 51st -- dead last -- in test scores.

To address these failings, Congress created the D.C. Opportunity Scholarship program four years ago. The plan provides low-income children the chance to attend a school of their parents’ choice. Some 1,900 disadvantaged children now attend private schools in the District.

Parents are happier with the schools they’ve picked, and the students are making progress, too. A testing evaluation shows that participating students scored higher than their peers who remained in public school.

Sadly, candidate Obama seemed to be leaning in the wrong direction. “What I do oppose,” he told the American Federation of Teachers, “is spending public money for private school vouchers. We need to focus on fixing and improving our public schools, not throwing our hands up and walking away from them.”

Yet real reform would involve expanding the D.C. Opportunity Scholarship program so that all children in the District can have the chance to attend a safe and effective school. That’s not “throwing up our hands.” That’s doing something. Something other than simply throwing more money at a problem. We’d be expanding a successful program, so students could attend better schools and their parents could be more involved in their education.

The Obamas are already a role model for this, of course. They arrive in D.C. as an intact family, and both Barack and Michelle are clearly involved in their children’s education. The key is to take this to the next level by making school choice available to all parents in the nation’s capital.

Powerful politicians of all stripes routinely exercise school choice. A recent survey of Congress found that 37 percent of representatives and 45 percent of senators had sent at least one child to private school. The Obama administration could pave the way for a better education system nationwide by extending school choice to those less fortunate than Washington’s elite power brokers.

That would be a change Americans deserve.